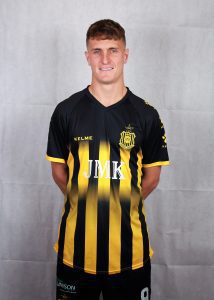 POSITION: Striker
JOINED TALBOT:
D.O.B
SQUAD NUMBER: 9
BIO: Talented left footer who signed for Cumnock from Bonnyton Thistle Boys Club. Graham became a regular at Townhead and scored twice after coming off the bench in Cumnock’s 3-0 extra time win over Thorton Hibs in the 2008 Scottish Cup semi final. Graham did make an appearance in the final coming on as a substitute in the 2-1 defeat by Bathgate.
He later joined Dumbarton but after only 5 appearances he returned to Cumnock where he helped our bitter rivals hang on to their Premier League mantle.