Talbot edged past Johnstone Burgh in a 2nd round tie where the referee took centre stage with a display of staggering ineptitude.

The visitors settled quickly and had the Talbot defence breached in the 11th minute when Connor slide a pass out to Cruden on the right and he fired a dangerous ball across the face of goal that Leishman held with Miller hovering.

On the quarter hour mark McCracken lifted a ball over the top towards Samson. It was slightly over hit but Cameron made a meal of it at the edge of his area, dropping it before managing to gather at the 2nd attempt.

Burgh nearly took the lead in the 17th minute. McPherson’s slack pass was pounced on and played through to Connor inside the area. He was forced wide by Leishman and played back to Gillespie at the edge of the area. He was crowded out and it broke to Crooks whose shot took a huge deflection and looked to be floating in until Leishman got across to his right to make the stop.

Two minutes later the visitors had another chance. They won a free kick out wide on the left and Brophy hit an in swinger toward the back post where Cruden just failed to connect.

In the 21st minute the visitors were awarded another free kick – this one 30 yards out following a challenge by Ballantyne. Brophy took it again but this time his ball in was headed clear by McPherson. 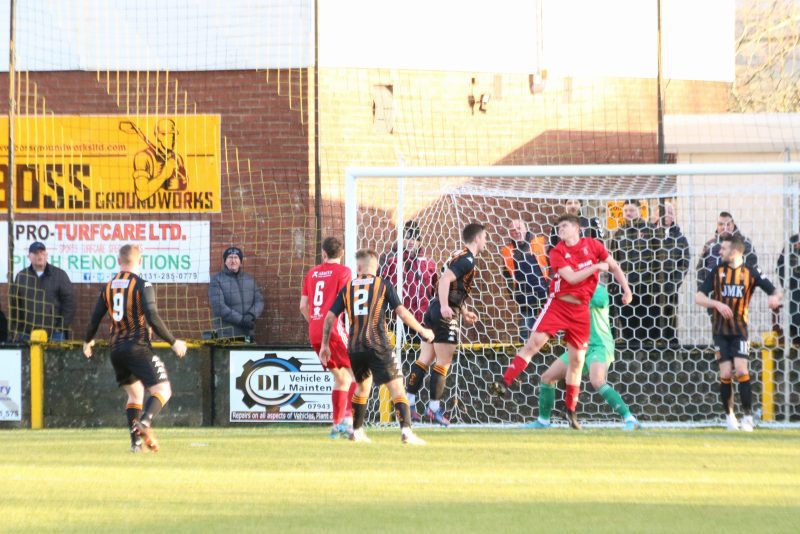 Against the run of play Talbot opened the scoring in the 22nd minute. Wardrope gathered out on the left and floated a good ball into the area to find Shankland. He controlled it on his chest and went for goal but his effort was blocked. It fell to Samson who also saw his shot blocked but it proved 3rd time lucky as it fell to MARK SHANKLAND who rammed it into the roof of the net.

In the 28th minute Talbot were awarded a free kick which was taken short and worked out left to Graham Wilson. He chipped it into the left of the area for Samson but it was fractionally overhit and Cameron was able to gather.

The referee, who certainly couldn’t be accused of being a homer, made the first of many dubious calls in the 32nd minute. A ball down the right saw Samson in a race for it inside the area with the keeper and he slid in to make the challenge and the ball broke off the keeper and out to Shankland who stroked it into the empty net. However, the ref decided that Samson had fouled the keeper and booked Samson.

Two minutes later the ref again awarded Burgh a free kick in a dangerous area. Brophy swung it in from the left and it skimmed off McPherson’s head and behind for the corner. When the corner came in it was cleared but only as far as Gillespie who drilled a shot on target from 22 yards but straight at Leishman.

In the 37th minute Leishman had his name taken for dissent.

A minute later Millar won a corner on the left when his cross was blocked. Brophy hit an inswinger that Crooks got his head to. It hit a defender and Talbot were able to clear. 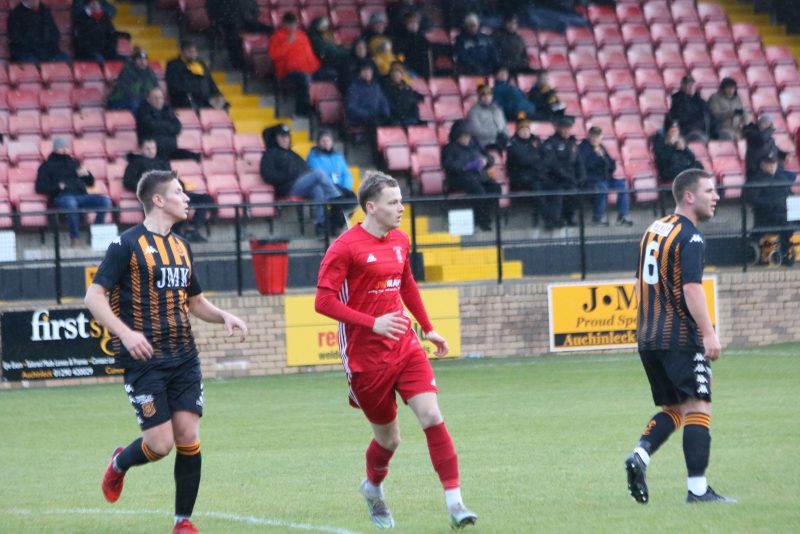 The Bot came close to doubling their lead in the 40th minute. Shankland played it through toward Samson who was just beaten to it by Andrew. However, Samson showed great persistence and closed Andrew down blocking his attempted clearance. The ball spun to Wardrope at the edge of the area and he steered a half volley just wide of the left hand post.

Talbot finished the half strongly and won a free kick 30 yards out following a foul on Boylan. Wardrope shoved it down the line to Stafford whose cross into the back post was met by Samson who headed it back across into the goal mouth. The defence were only able to clear it to Shankland but his shot was blocked behind for the corner and Burgh held on til the half-time whistle.

The 2nd half was only 5 minutes old when the ref had the Bot support up in arms twice in succession. Talbot looked to be denied a penalty when Samson was obstructed inside the box as he tried to race onto Shankland’s through pass and when Burgh failed to clear their lines Graham Wilson was up-ended just outside the box but to the disbelief of all & sundry the ref gave the free kick to Johnstone Burgh.

The visitors almost levelled matters in the 52nd minute. Connor spread play out right to find Brady on the overlap and when he squared it across Crooks met it 20 yards out and fired a low drive just wide of the right post.

In the 56th minute Ballantyne picked up a yellow card for dissent after the referee awarded a free kick out on the left. Brophy curled it into the back post where Millar headed it over the bar from close range.

Talbot’s next attack saw Boylan whip a good ball across the face of the area. There were no takers in the centre but Park retrieved it on the left of the box. He cut it back to Samson who managed to turn his man but saw his shot blocked en route to goal.

Johnstone Burgh made a change in the 69th minute with Donaldson on for Cruden.

Yet another refereeing call went against Talbot in the 71st minute. McPherson met a cross into the Bot area and headed it up into the air. McCracken followed up and headed it clear just outside the box but the referee penalised him for winning a header and gave Burgh a free kick in a great area. Gillespie took it and his shot clipped the outside of the wall and was deflected just wide of target.

With quarter of an hour remaining Talbot thought they had killed the tie off with a 2nd goal. Shankland laid the ball off to Boylan as he burst forward on the right and when he was challenged it fell to Samson who steered it across goal and into the far corner but the standside linesman raised his flag and the goal was chalked off. 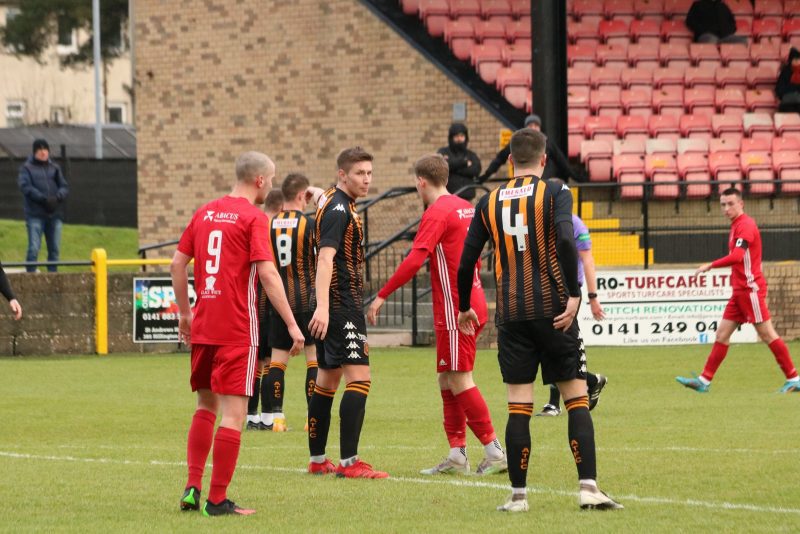 In the 78th minute Talbot made a triple substitution with Shankland, Samson and Graham Wilson making way for Taylor, Mason and Aiden Wilson.

McCracken had his name taken in the 81st minute when the ref awarded Johnstone Burgh their umpteenth free kick inside the Bot half and two minutes later he was joined in the ref’s notebook by Taylor who was penalised for preventing Burgh from taking a quick throw in which should have went Talbot’s way in any case.

Four minutes from time the impressive Connor strode forward into space but his shot from 25 yards didn’t trouble Leishman as it sailed well over.

Two minutes from time Taylor did well down the right cutting into the box but his cut back didn’t have enough on it and the defence were able to clear.

In the final minute of regulation time Burgh won a free kick out wide on the left. Gillespie swung a good ball over but Leishman proved equal to it.

Into injury time Talbot came very close to nabbing their 2nd twice in quick succession. Firstly Wardrope fed it to the right to find Boylan whose low drive was spilled by the keeper before a defender lashed the rebound behind. When the corner came in Burgh failed to clear their lines and it came to Taylor on the right who whipped a great cross to the back post. The ball broke into the path of Wardrope 8 yards out and his goal bound effort was deflected over the bar by a defender.

Despite there being no injuries to speak of the referee managed to add 5 minutes on at the end but just when it looked as though the floodlights would need to come on he finally blew up for full time. 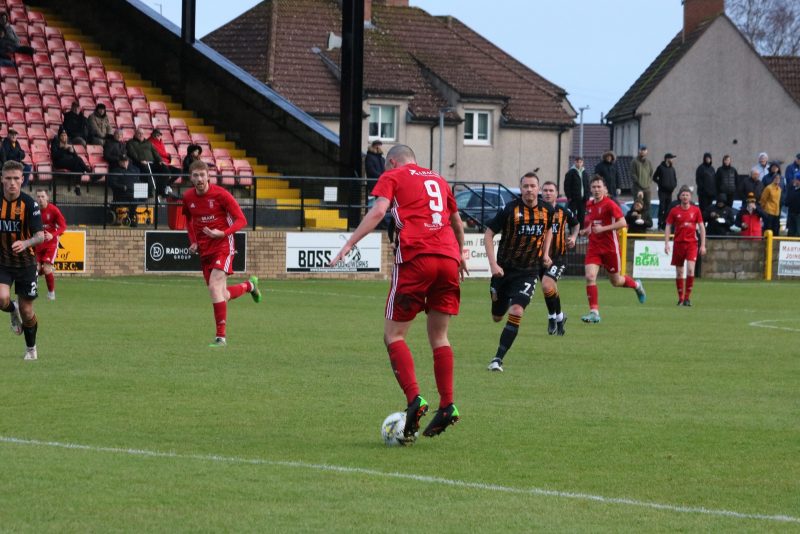 A hard fought cup tie against tricky opponents made all the tougher by Burgh’s 12th man who left the field to a chorus of jeers from the Bot support.

Next up for Talbot it’s back to league action when they host Cambuslang Rangers next Saturday. 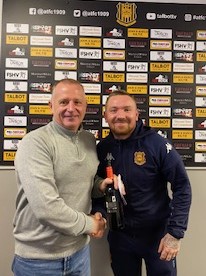 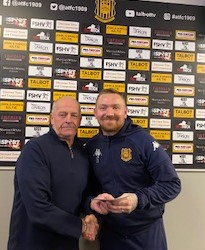 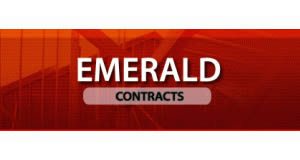