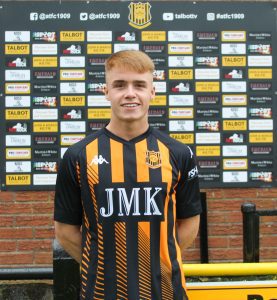 BIO: Aaron joined Talbot at the start of the 2021/22 season from Kilmarnock amateur side Shortlees where he was gathering rave reviews. It was a no-brainer for the teeager to join as his father Billy Mason was a former Talbot captain during the 80’s. His workrate during every match he is involved in is relentless and with his turn of speed and footballing skills he can give an opposition defence a torrid tim