Talbot climbed to 4th in the table, doing it the hard way, having to come from a goal down to beat Cambuslang on a blustery day at Beechwood. 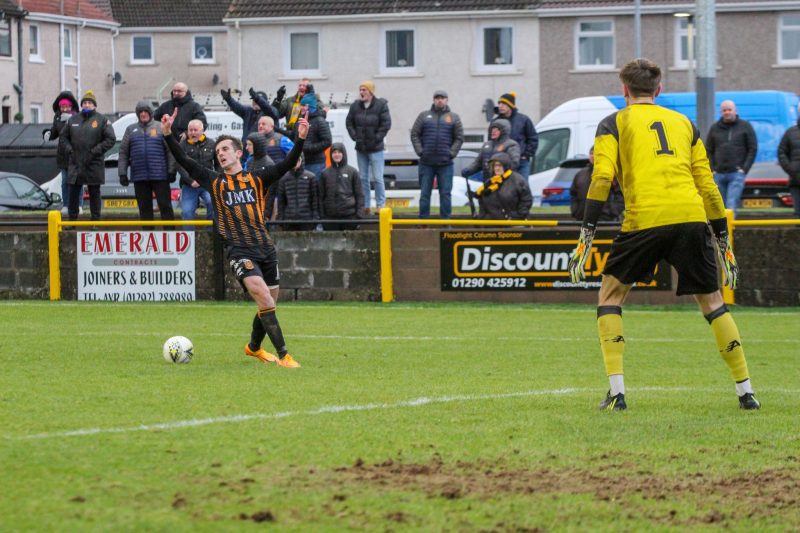 The Bot made a bright start and nearly opened the scoring in the 2nd minute. Samson laid the ball off into the path of Graham Wilson who burst clear on the right and went through one on one with the keeper but his namesake came out on top – making a good save with his outstretched leg to deny Talbot the lead.

In the 10th minute Talbot again came close. Taylor swung over a good cross from the right that Samson tried to meet in the centre with an overhead kick. He just failed to make contact but it cannoned off a defender behind him and was heading in for an own goal til the keeper dived low to his left to make the stop.

On the 13th minute Samson won a corner down the left. Wardrope whipped in a great delivery that the keeper flapped at and it broke off a defender out to Stafford 10 yards out whose low drive was heading in til deflected wide by Greenwood.

A minute later Talbot were back on the attack. Wardrope intercepted a slack pass midway inside the Lang half and sprang forward before feeding it out to Graham Wilson on the left of the area. He drilled it for goal but the keeper made a good stop.

At this stage it was all Talbot and Graham Wilson had a half chance on the quarter hour mark when he found himself in space just outside the area but his shot flew just over the bar. 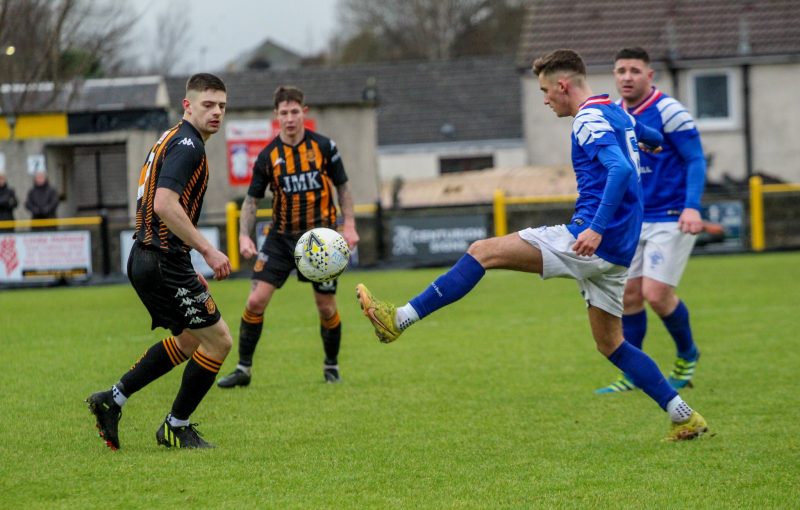 In the 17th minute Talbot won a free kick out on the left which Wardrope curled into the centre where it was headed on target but again the keeper did well.

Talbot’s next chance came in the 24th minute. Samson met Taylor’s cross from the right and glanced it across the area. Wardrope retrieved it and went for goal from a tight angle and Wilson blocked it behind at his near post.

A minute later Talbot won a free kick in a good area when Graham Wilson was clipped just outside the box. Wardrope took it but fired his shot straight into the wall.

In the 28th minute Nelson received the first caution of the afternoon for kicking the ball away.

Cambuslang had a chance in the 31st minute when Anson won them a free kick 22 yards out. Nelson took it and hit a decent effort that was always going a little too high and wide.

Talbot’s next attack should have seen them move ahead. Armstrong played it out to the overlapping Wardrope and his cross into the centre found Taylor racing onto it 6 yards out but his header was deflected behind for a corner.

Five minutes from half time Talbot again threatened in the Lang penalty area. Wardrope’s free kick into the area was headed clear by Breslin but retrieved on the right by Armstrong. He fed it back to McPherson and his looping cross was met by Wardrope whose first time shot was heading on target but was blocked by a defender. 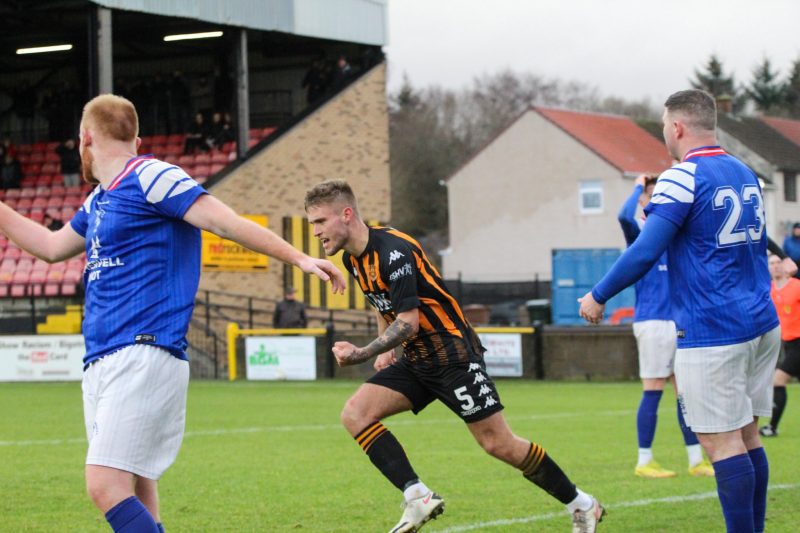 Both sides had a chance a piece in the closing stages of the half. In the 43rd minute a cross from the right skimmed off Park’s head and came to Nelson on the left of the penalty area and he fired a shot wide of the right post. Down the other end Graham Wilson broke forward before releasing it to Aiden Wilson. His pass found Samson inside the area and his low drive was turned round the right post by the keeper with the sides trooping in shortly after goal less at the interval.

There were no new faces at the start of the 2nd half but Talbot made a tactical shift with Park moving to right back and Taylor to right midfield.

The Bot almost made the perfect start to the 2nd half when Aiden Wilson’s cross was flicked on by the head of Graham Wilson into the path of Samson 6 yards out. He hooked a shot on target but it flew straight at the keeper who held it.

Reid became the 2nd Lang player in the book when he received a yellow card for a tackle through the back of Wardrope in the 51st minute. Wardrope took the resultant free kick but it lacked the power to trouble the keeper.

Talbot fell behind in the 54th minute and it was a poor goal to lose from a defensive point of view. A shy was taken quickly on the right into Reid and he was allowed time & space to thread a pass through to Leighton inside the area. He squared the ball across and NELSON had plenty of time to cut onto his right foot and pass the ball beyond Leishman.

In the 62nd minute a ball over the top found Graham Wilson inside the penalty area. His first touch took him a tad wide but he managed to fire a shot on target that the keeper blocked at his near post. 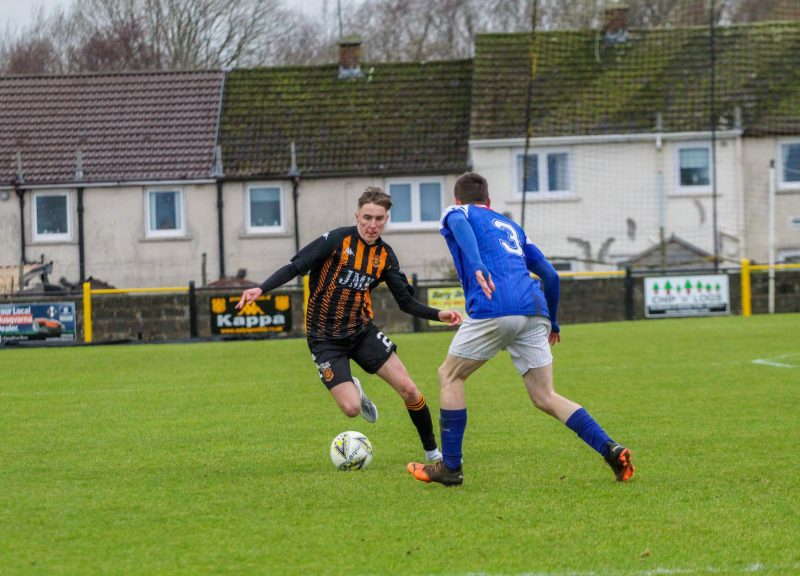 Two minutes later Talbot passed up a golden chance to level. A ball down the right was flicked on into the path of Boyle and he raced up the line before cutting it across the face of goal where Samson looked certain to score but he scooped his shot over the bar.

The visitors now made a change with Maxwell on in place of Scott.

With 69 mins on the clock Talbot grabbed the equaliser. Taylor won a corner down the right and when Wardrope delivered it into the centre CHRIS STAFFORD ran onto it to power a free header beyond the keeper.

In the 72nd minute Talbot had a half chance when Boyle met a shy from the right and laid it back to Graham Wilson on the edge of the area but he fired well wide of the left post.

The Lang goal led a charmed life moments later. Wardrope cut in on off the left and tried to steer a shot into the opposite corner only for the keeper to get down and make a good save low to his left. The loose ball was then squared back across and Boyle met it only to see his shot come off the base of the left hand post. It came out to the 6 yard area where a scramble ensued and the ref gave Cambuslang a free kick.

Talbot’s pressure did pay off soon after as they moved in front on the 75th minute. Taylor raced in behind wide on the right and his low ball across goal was deflected into his own net at the near post by REID to put Talbot 2-1 ahead.

Cambuslang now made a further change with Richford on for Brennan. 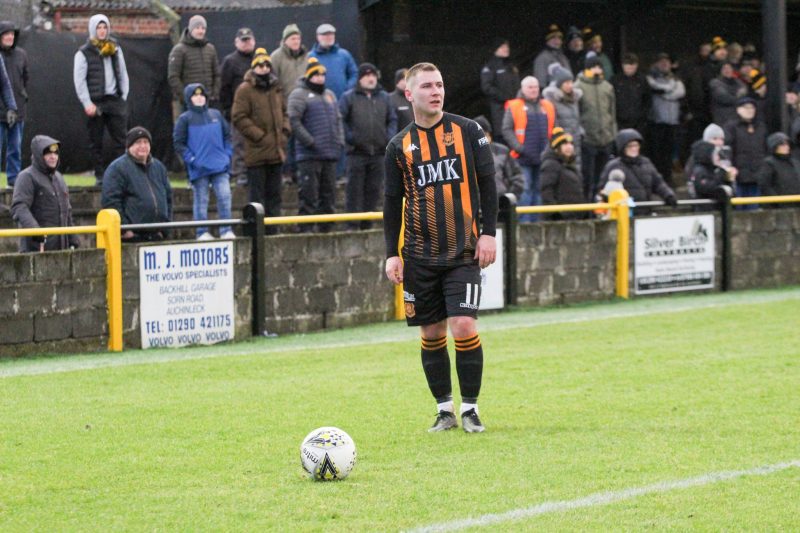 It was game over in the 78th minute when Talbot grabbed their 3rd. Graham Wilson got in behind on the right and hit the bye line before cutting it back for KIER SAMSON whose shot from 6 yards saw the keeper get a good hand to it but it spun away into the back of the net.

Two minutes later Talbot thought they were in again when Wardrope’s reverse pass sent Samson free of the defence but it fell foul of a marginal offside call.

In the 82nd minute Breslin received a caution when he brought Graham Wilson down just to the right of the penalty area. Before the free kick was taken Talbot made a double change with Mason & Boylan coming on for Graham Wilson and Samson. Wardrope took the free kick and swung it beyond the far post where McPherson stooped to meet it but couldn’t direct his header on target.

Four minutes from time Armstrong received a yellow card for a challenge on Maxwell. Talbot now made further changes with Wardrope and Taylor making way for Crawford and Smith.

In the final minute Smith was caught just outside the penalty box by Richford who was booked for the challenge. Smith took the set piece and delivered a dangerous ball into the goal mouth which Breslin managed to head clear. 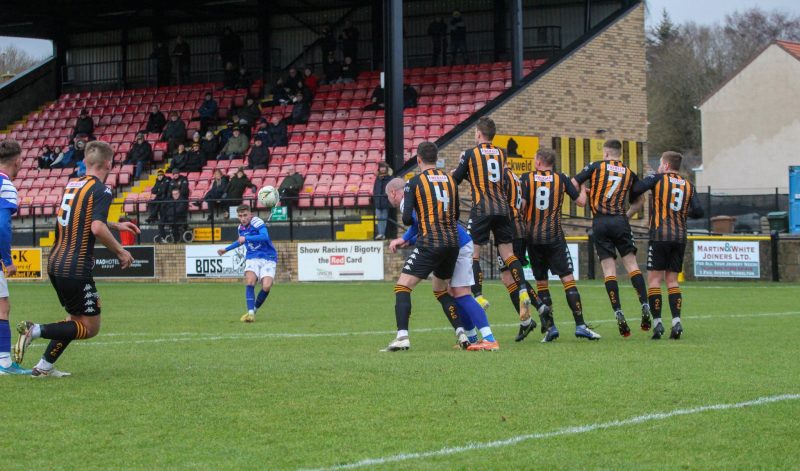 A good recovery from Talbot who kept at it after going behind against the run of play to secure the win. Next up for Talbot it’s back to Beechwood for a midweek league encounter with Largs Thistle.

Sponsor Man Of The Match Awards 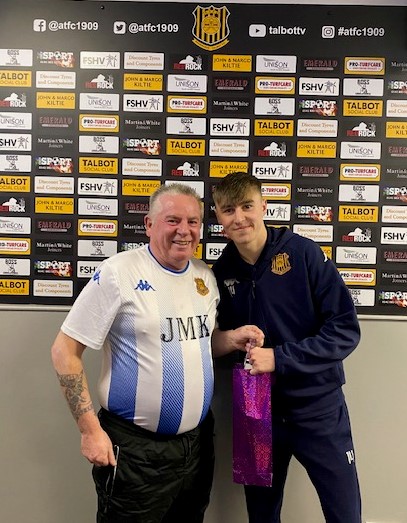 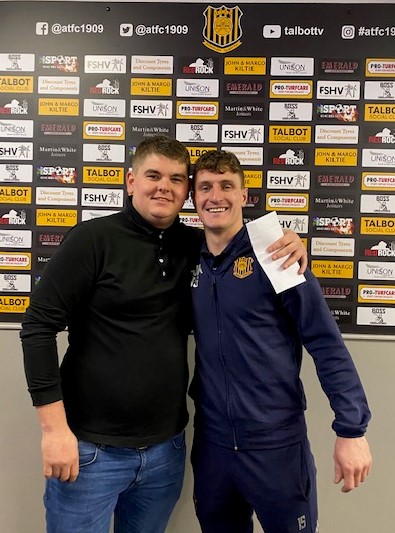 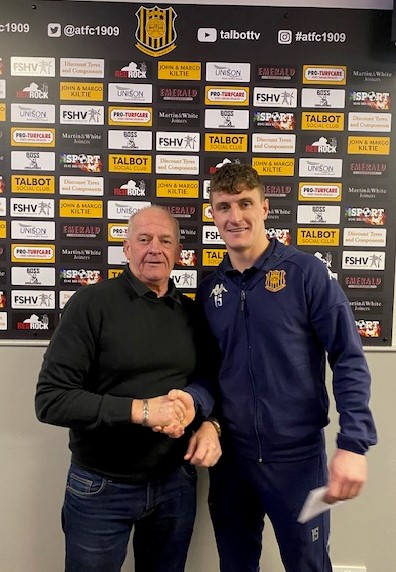 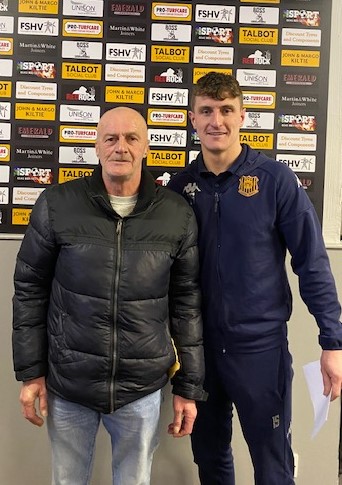