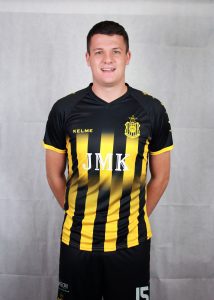 BIO: Neil joined Talbot at the start of the 2016/17 season from Darvel Juniors, but he spent most of his first season on the bench. However his patience was rewarded when he started to command some regular game time and since then has been a regular in the Talbot rearguard. He had a promising youth career but moved to the Juniors with Darvel where he enjoyed a couple of seasons playing regularly with the former ADL side.