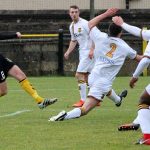 After Sean McIlroy smacks the ball off the crossbar, ‘Pee-wee’ pounces onto the rebound and fires the ball into the back of the net. 1-0. 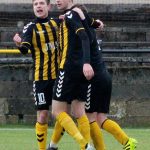 Dwayne gets congratulated by his team-mates after opening the scoring for Talbot. 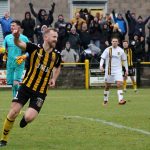 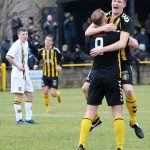 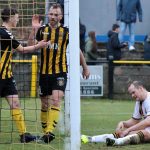 It’s three and easy for Auchinleck, as Klark Thompson celebrates scoring his goal with Sean. 3-0. 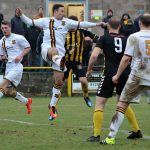 Kyle Faulds marks his return to action after injury with a goal, as he sends a powerful header into the back of the net. 4-0. 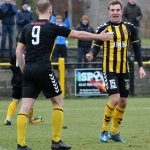 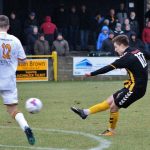 The game’s scoring gets completed with a spectacular long range effort from Jamie Glasgow. 5-0. 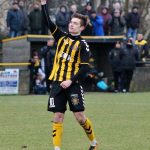 Jamie shoves a celebratory fist into the air after netting a stunning goal. 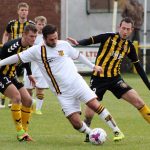 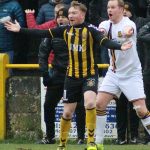 Emotions boil over after Glasgow gets fouled in front of the away dugout. 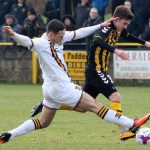 Jamie goes on a blistering run while trying to evade this challenge. 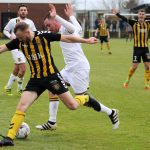 Stephen Wilson shouts for a foul after McIlroy gets pushed from behind. 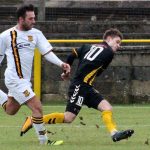 From out on the left of the box, Glasgow has a go from an awkward angle. 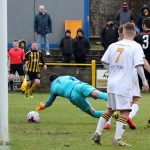 The Kilbirnie ‘keeper pulls off a great save to thwart Talbot after a corner. 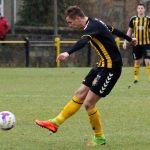 McPherson can only watch Stephen have a go from distance. 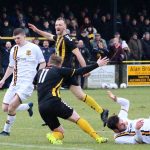 With only the Kilbirnie ‘keeper to beat, Shankland gets pulled down from a last ditch tackle from a Kilbirnie defender, where… 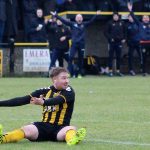 …he and the Talbot bench shout their case for a free-kick, while… 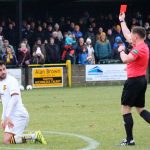 …the referee decides to give the Kilbirnie defender a straight red card for his challenge. 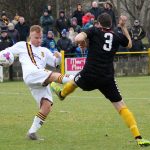 Pope tries his luck with this awkward shot. 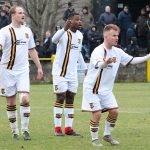 The Kilbirnie players vent their fraustrations during a break in the game. 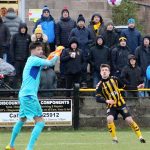 From out on the wing, Jamie Glasgow hits an audacious lob over the ‘keeper which…

…smacks off the far post and lands at the feet of Sean McIlroy who scores from the rebound. 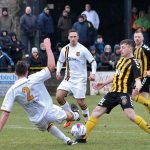 Thompson gets stopped in his tracks inside the box. 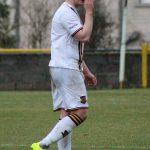 Game time is no time to start doing a ‘Three Stooges’ routine! 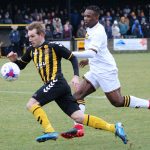 Faulds gets chased, as he races into the Kilbirnie box. 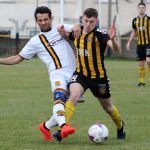 Klark Thompson tries to muscle his way up the park. 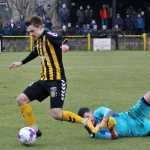 On his way to assisting Talbot’s third goal, Jamie avoids getting stopped by the ‘keeper.