Talbot came from behind twice to secure a valuable point and maintain their lead at the top after an end to end battle at Darvel played out in front of a bumper crowd.

As the rain and hail lashed down Talbot got off to a strong start winning in a free kick in a good area within the 1st minute after Boylan was sent tumbling. Wardrope took it and his shot clipped the wall & flew just wide of the right post.

It was the Bot making the early running and Talbot had another chance in the 3rd minute. Boylan whipped over a good cross from the right that Hyslop headed just wide of target.

Darvel showed their attacking intent in the 5th minute when a ball down the left found Mackenzie running in behind McPherson. He squared it across to the far side of the area where Miller drove a low shot on target which Leishman saved well with his feet.

Leishman came to Talbot’s rescue again in the 13th minute. McCracken’s pass from the back was intercepted and Darvel broke forward through Morrison whose shot from 22 yards was turned round the right post by Leishman.

The Bot then had a half chance down the other end when the Darvel defence failed to clear their lines as the ball zipped around their area. It eventually broke out to Aiden Wilson who blasted his shot well over the bar.

The opening goal came Darvel’s way with 21 mins gone. A ball through the centre caught the Bot defence square and MACKENZIE beat the offside trap to run through on goal and take it round Leishman before passing it into the net.

Darvel’s lead though proved to be short lived and Talbot drew level in their next attack in the 24th minute. Wardrope found space on the left and crossed it into the area. It took a deflection and sailed to the back post where KIER SAMSON turned it home – taking a head knock in the process.

Talbot had the ball in the net again in the 27th minute but the goal didn’t stand. Hyslop slipped the ball out to Boylan on the right and his cross hit off Caldwell and spun high in the air. Graham Wilson jumped with the keeper and forced it home but the ref awarded Darvel a free kick.

Two minutes later Talbot were denied the lead by the woodwork. Boylan gathered on the right and fed it down the line to the overlapping Samson. He swung a cross to the far post where Graham Wilson powered a header off the post with the keeper beaten.

The Bot were having a good spell and next to try his luck was Healy when he volleyed over the bar when he met a cross from the right.

The large travelling support & Talbot bench were enraged in the 32nd minute when Miller raced onto a ball down the right. He looked about 10 yards offside but the linesman was way off the pace and kept his flag down. Fortunately, no harm came of it as Miller drove the ball across the face of goal but there was no one in the centre. The referee then came across to book Tucker for his protests and moments later McPherson was yellow carded for a challenge on the far side.

In the 37th minute McCracken tried his luck from the edge of the area only to see his shot blocked and spin high toward goal. Graham Wilson pursued it in and challenged the keeper but he was booked for his trouble.

Healy almost gave Talbot the lead in the 38th minute when he drilled a left foot shoot just past the left post.

Darvel now swept up the other end and regained the lead with a well-worked goal. A quick series of one-twos ended with MCSHANE rifling an unstoppable shot past Leishman from 18 yards to make it 2-1.

Talbot looked for an early response and won a free kick just outside the area when Graham Wilson was downed. Wardrope took it but got underneath it and lifted it well over the bar.

A minute from the interval Samson got a sore one when Caldwell went right through him resulting in a booking for Darvel’s full-back and soon after the whistle sounded and Darvel went in with a narrow lead at the interval.

When the teams re-emerged for the 2nd half Darvel had made a change between the sticks with Avci coming on in place of Truesdale.

Just as they had from kick off Talbot made a positive start to the 2nd half and threatened the Darvel goal within a minute of the restart. Boylan gathered on the left and skipped past Darvel’s right-back before floating a cross onto the head of Healy who nodded it over the bar.

Talbot missed a golden opportunity to level on 50 minutes.  Boylan drove forward through the centre before releasing it left to find Wardrope. He cut it back across goal where the defence failed to clear and it came to Graham Wilson who fired past the post from 15 yards.

Wardrope was next to have a go for Talbot. Boylan’s early ball found him breaking down the left. He cut inside onto his right foot but his shot lacked the power to test Avci.

In the 56th minute Meggatt received a caution for impeding Samson as he made to get onto a through ball. Wardrope took the free kick and aimed it in toward McCracken but it was just a shade too far in front of him in the centre.

The Bot had another good chance in the 59th minute when Boylan was sent free on the left. He raced into the area and knocked it wide of the keeper but went over in the box and was booked for simulation.

It was Talbot doing the pressing and the Bot had another glimpse at goal on the hour mark. Another ball threaded through the defence found Boylan on the left. He drove to the edge of the area and let fly for goal but a defender dived in to block his shot behind for the corner.

The heavy rain was making life difficult for the players and Avci nearly fell victim to it in the 63rd minute when he slipped when going to make a routine clearance. He managed to recover and partially cleared it but only as far as Graham Wilson who bent a cross over from the left but there were no takers at the back post.

Darvel hadn’t offered much in the 2nd half but they won a free kick in shooting range when McShane was brought down by Healy’s sliding tackle. Healy received a booking for the challenge and McShane took the set piece but it was easily held by Leishman.

In the 66th minute Mackenzie had an opportunity to tie it up for Darvel when the ball broke kindly to him inside the penalty area but his low drive was brilliantly saved by Leishman low to his left.

Tucker made his first change of the evening in the 71st minute when the tiring Samson made way for Glasgow and the change paid off immediately with Talbot levelling within a minute.

Wardrope cut in off the left and flighted a cross to the far side where Glasgow guided a header back across goal for DWAYNE HYSLOP to steer a header beyond the keeper.

Talbot were dealt a blow in the 74th minute – firstly when they conceded a free kick just wide of the penalty area – but also as McPherson picked up a knock and had to limp off with Crawford coming on in his place. The free kick was flashed across the goal mouth and flew behind for the goal kick.

With 10 minutes remaining Talbot came agonisingly close to taking the lead. Wardrope’s cross from the left was only cleared out as far as Healy on the 18 yard line and his low drive took a slight deflection before sliding inches wide of the left post.

Talbot made their final change in the 82nd minute with Shankland coming on for Boylan.

Both sides were tiring and Darvel’s no 10 and Glasgow both picked up cautions for fouls in the closing stages.

In the 87th minute Talbot had a late chance when Shankland laid the ball off toward Graham Wilson on the right of the area. He burst through on goal but Avci was quickly off his line to slide it clear. The ball came to Glasgow 16 yards out but his shot was blocked by a defender.

In the final minute of regulation time Wardrope split the Darvel defence with a ball out to the left to find Shankland breaking in behind but he lost his footing on the slippy surface and the chance was lost.

As the game moved into added time Darvel pushed forward looking for a late winner but couldn’t find a way through and the game ended all square.

A good away point for Talbot who now face an equally tricky midweek visit to Blair Park to face Hurlford as the Bot look to maintain their lead at the top of the table. 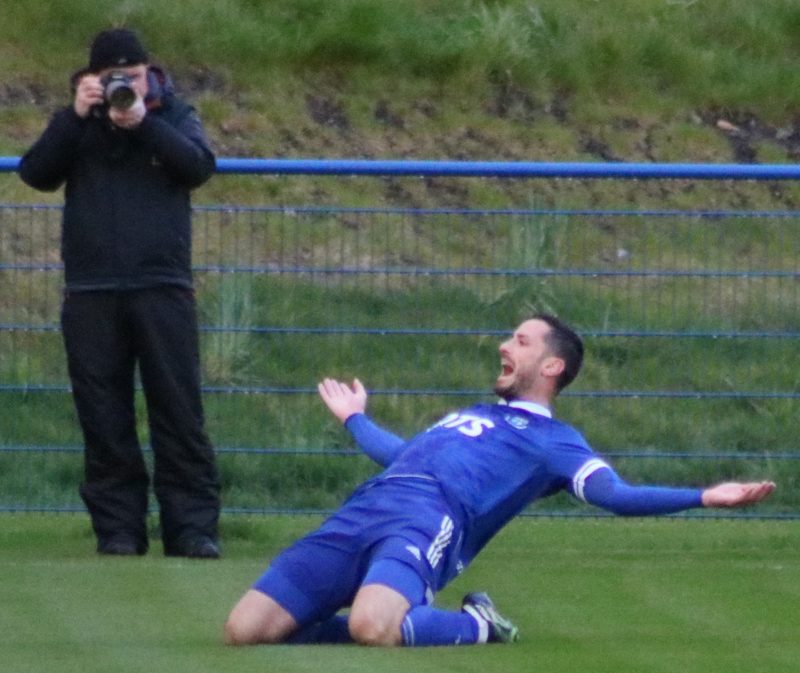 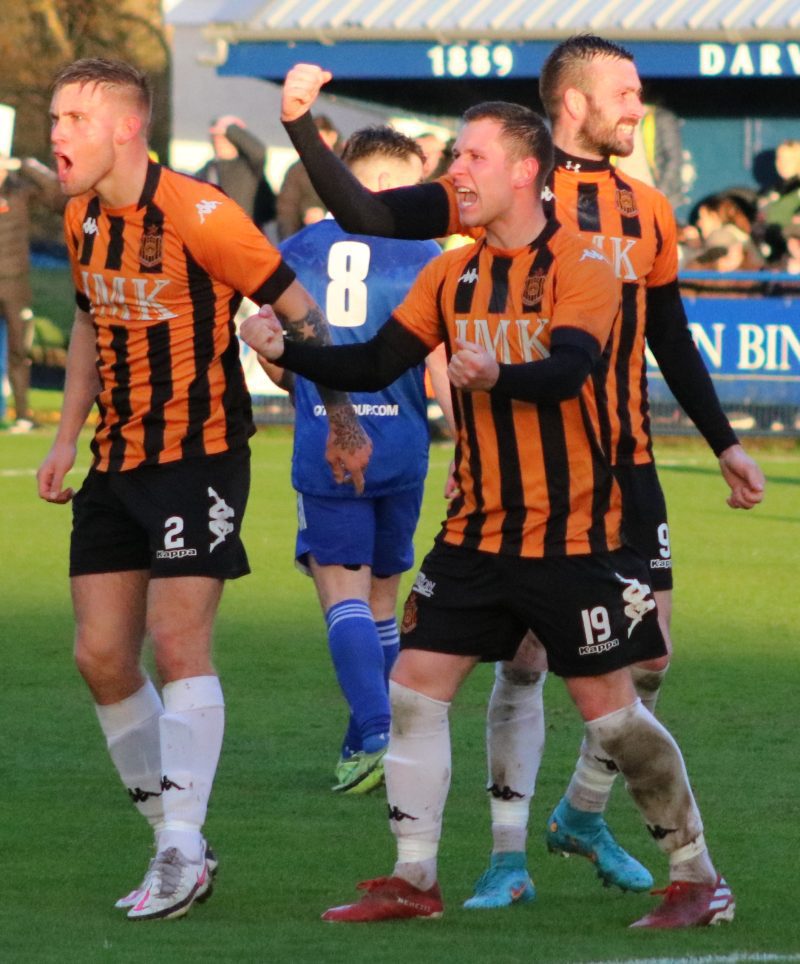 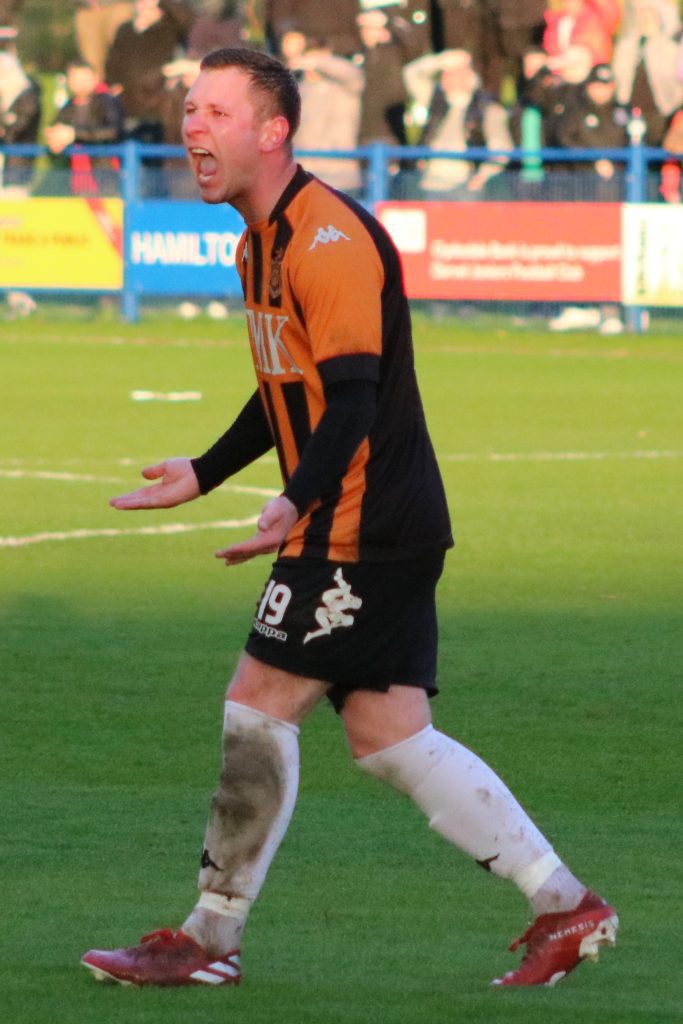 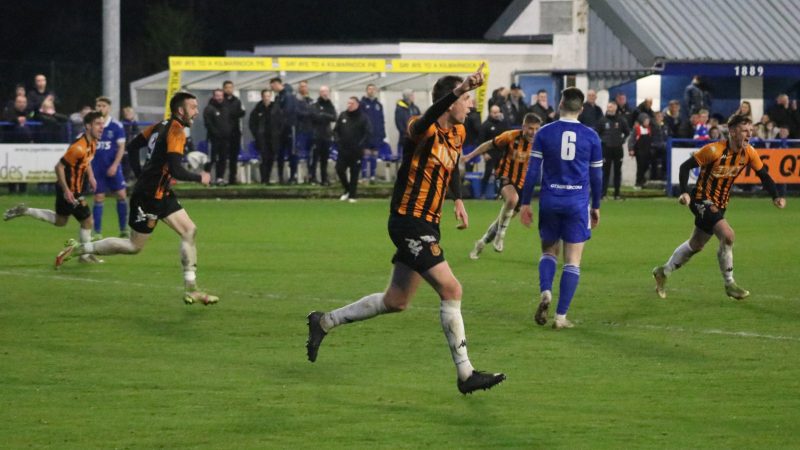 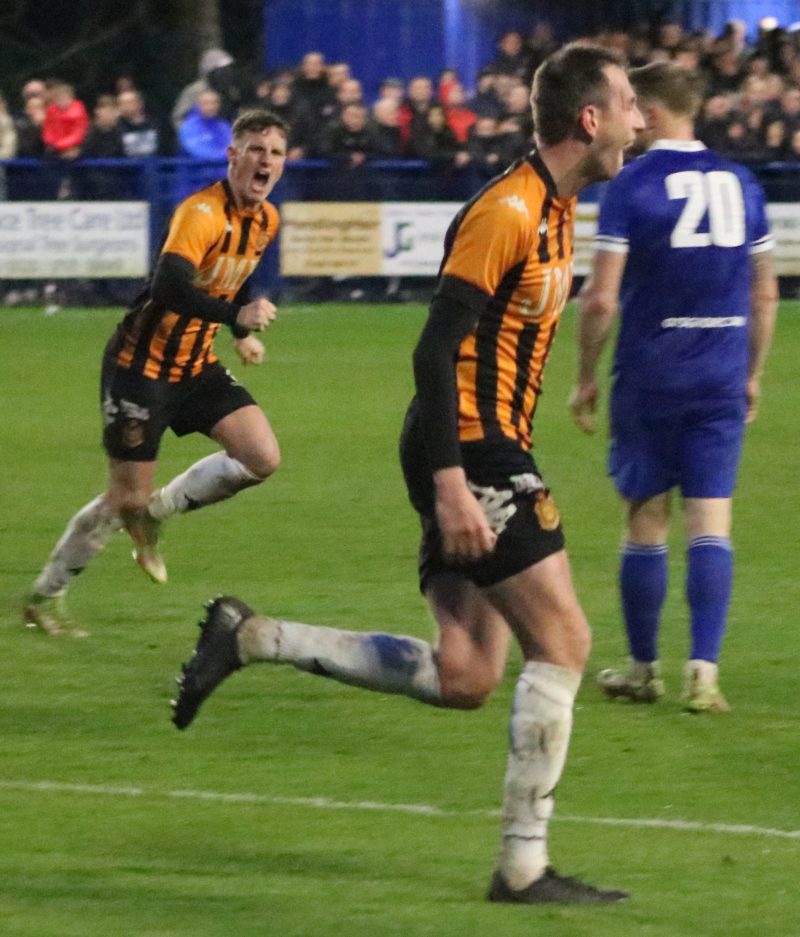