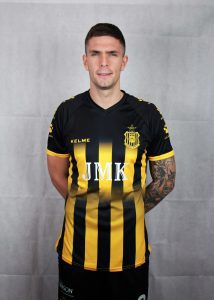 SPONSORED BY: AKA AESTHETICS PRESTWICK

BIO:  Craig joined Talbot after a career in the Ayr United Youth Academy. He was on loan to Talbot during the 2015/16 season where he was part of the successful league winning squad. He returned to Ayr  at the end of the season but joined Talbot at the beginning of the 2016/17 season on a permanent basis. Craig made seven appearances for the Ayr first team.