Talbot booked their place in the last 8 of the West of Scotland with a bit to spare as they breezed past Cambuslang Rangers at Beechwood.
The writing was on the wall for the visitors as soon as the 4th minute when Talbot took the lead in the 1st meaningful attack of the match. Love raced to the bye line down the right & whipped a cross over to the back post. Gillies brought it down & fired a shot on target which Lynch did well to save but YOUNG was following up to place the rebound into the roof of the net.
Within a minute Talbot nearly doubled their lead. Gillies jousted in the air when Leishman launched it down field & although he didn’t win it, he did enough to prevent Newman heading it clear & the ball ran through to Shankland on the right of the penalty area who directed a shot inches wide of the far post.
Only the width of the woodwork prevented Talbot extending their lead in the 7th minute. Young’s square pass found Pope in space & he played it up the left to Shankland. He jinked inside his man into the area & curled an ambitious effort from a tight angle that had the keeper well beaten but came back off the face of the bar.
Talbot continued to control the game but it took until the 19th minute to double their lead. 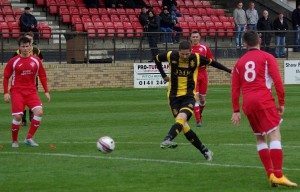 GILLIES bent a curling effort from the left, just outside the area, toward the far corner which should have been saved by Lynch but the ball skipped up off the surface just before the keeper & squirmed over his trailing arm into the back of the net.
Any dream of a Cambuslang fightback ended in the 24th minute when Talbot killed the tie off with a 3rd goal. Lyle knocked a good cross over that Shankland gathered just beyond the far post. He angled it back into the area where Young coolly stepped over the ball & his dummy allowed POPE the time & space to fire a low drive past Lynch.
The visitors had to make a change on the half hour mark. Brogan picked up an injury and had to be replaced by A Scanlan.
Gillies almost grabbed his 2nd in the 34th minute. He twisted & turned just outside the 6-yard area before firing for goal, only to see his shot deflected just over the bar.
Cambuslang had offered little in attack but should have pulled a goal back in the 36th minute. Ryan Scanlan won a corner down the left & when it was delivered into the centre, Newman met it unchallenged but sent his free header straight at Leishman.

Talbot ended the 1st half on the front foot & were unlucky not to add to their lead in the last minute of the half. Shankland whipped a quality in swinging corner over from the left that forced Lynch into a block at his near post. It came out to Young on the 6-yard line & his effort at goal was deflected past for another corner. This time Shankland hit it deeper & McCracken met it just beyond the far post but steered a free header over the bar.

Tucker made a change before a ball was kicked in the 2nd half, with Findlay on for Lyle.
With the comfort of a 3 goal cushion Talbot were on easy street & might have extended their lead in the 52nd minute. Love nicked possession off a defender 25 yards out & slid a great ball through to Steven Wilson. He had the chance to go one on one with the keeper but took a heavy touch & it ran away from him out for a goal kick.
One minute later Cambuslang gift wrapped Talbot’s fourth. Newman looked to be in control as he tried to shield it back to Lynch but he left it to the keeper & GILLIES nicked in to take advantage of their mix-up to steer it into the empty net.

Lynch produced a quality save a minute later to prevent further damage to the visitors. Shankland raced onto a ball over the top of the static defence & his shot was heading into the bottom corner until Lynch dived to his left to turn it round the post.
Love had a good chance to add to Talbot’s lead in the 55th minute. Steven Wilson broke down the right & hit the bye line before cutting it back to Love who placed a shot just wide of the right post from the opposite end of the 6-yard box.
Tucker now made a change with Hyslop on for Young.
It was still all Talbot & shortly after coming on Hyslop saw his short from distance held by Lynch & then in the 64th minute Pope drilled a low shot straight at the keeper from just inside the area.
Gillies had a good opportunity to claim his hat-trick in the 69th minute. Shankland floated an inch perfect cross in from the left to the back post where Gillies met it, only to direct his volley over the bar.
Talbot now made a further change with Graham Wilson on for Boyd.
With 10 minutes to go Talbot completed the scoring with a perfectly executed counter-attack. Cambuslang had a corner on the right that they knocked to the back post. McCracken turned defence into attack with one ball when he hit it from his own box to find Love racing down the right touchline. He made tracks before cutting the ball back to HYSLOP who placed a great finish behind Lynch to make it 5-0.
Five minutes from time Cambuslang threatened a consolation goal. McBeth spun inside the box to turn away from McGoldrick & Leishman did well to turn his shot over the bar from 6 yards out.

Talbot kept pressing & threatening but couldn’t add to their tally and the game ended 5-0 to the delight of the home fans & the relief of Cambuslang.
Next up for Talbot is a crucial mid-week double header in the league, as they visit Glenafton & Kilbirnie before facing Clydebank at Beechwood next Saturday in the next round of the West.