Talbot’s remarkable record against Highland League opposition continued as they battled to a deserved away win at Fraserburgh to book their place in the last 32 of the senior cup where the Bot have earned an all Ayrshire tie with Ayr United.

Fraserburgh won a couple of early corners but nothing came of them. Talbot’s first attack saw Stephen Wilson burst forward before releasing it out right in an attempt to find his brother Graham but Leask was swiftly off his line to beat him to it.

Neither side had really settled & the game sped along at a frantic pace with both sides surrendering possession on a regular basis.

The referee reached for his notebook in the 20th minute when he booked Hay for a blatant trip on Graham Wilson as he broke into the Fraserburgh half. Pope angled the free kick to the far side of the box where it broke to McCracken on the right edge of the box. He tried to fire a low ball across goal but it was cut out by a defender at the near post & went behind for a corner. Glasgow knocked the free kick into the near post where Stephen Wilson’s effort at goal was blocked. It came back out to Glasgow who drilled a shot across the face of goal & wide of the right post.

Talbot’s next attack saw Lyle make tracks down the right & swing a good cross into the centre. Christie was caught late as he cleared it resulting in a booking for McIlroy.

McIlroy was involved in Talbot’s next attack when he raced to the bye line before cutting a cross back toward Graham Wilson who bulleted a header wide of the left post.

Shortly after, Talbot had a half chance when a poor clearance came straight out to Hyslop who volleyed it wide from 22 yards out.

Graham Wilson became the 2nd Bot player cautioned when he was penalised for a tussle with Macdonald in the 32nd minute, with the Broch midfielder making the most of the situation.

Talbot were having the best of it without creating too much and the game’s next half chance fell Talbot’s way in the 41st minute. McIlroy forced a corner down the left which Glasgow swept deep beyond the far post. Hyslop guided a header back across goal where McIlroy nodded it goal ward past the stranded Leask but there wasn’t enough on it & the keeper recovered to gather on the goal line.

A minute from half-time and the home side were reduced to 10 men. Pope played it down the line into the feet of Graham Wilson. He shielded the ball from Hay before turning his marker who hauled him to the deck. The ref awarded Talbot the free kick & sent Fraserburgh’s left-back for an early bath for a second yellow card. Glasgow took the resultant free kick & curled it low into the near post. Stephen Wilson got a touch on it & looked to have flicked it home but Hay managed to hook the ball clear off the goal line to ensure the sides went in level at the break.

Talbot started the 2nd half in sprightly fashion & carved out a good chance within a minute of the re-start. Graham Wilson gathered on the left & held off the challenge of Dickson before slipping a pass through for Glasgow who shot wide of the right post.

A minute later Talbot threatened again. McPherson flighted a free kick into the penalty area where Hyslop headed it back across goal & Cowie had to head over his own bar to concede the corner.

Talbot kept the pressure on & it looked as though Stephen Wilson was poised to head Talbot into the lead when Graham Wilson’s cross found him free at the back post but he lifted his header over the bar from 5 yards out; however, it wouldn’t have counted in any case as the assistant had raised his flag for offside.

Fraserburgh had offered very little going forward but tested the Talbot defence in the 52nd minute. An angled ball from right to left nearly found its way through to Barbour but McCracken did well to cut it out & cushion a header back to Leishman.

The action then immediately switched to the other end where it looked as though McIlroy was set to break through on goal but Leask read the danger & hared off his line to clear.

McCracken had his name taken in the 53rd minute for what looked to be an innocuous challenge.

Fraserburgh made the 1st change in the 54th minute when Campbell came on in place of Johnston.

The deadlock was broken in the 59th minute and it was a goal not only worthy of winning any game but a strong contender for goal of the round. A shy from the left came into Graham Wilson who flicked it inside into the path of STEPHEN WILSON who rocketed an unstoppable shot into the top right hand corner to put Talbot 1-0 ahead.

It could have been game over two minutes later. Graham Wilson raced through the centre of the defence but with only Leask to beat he drilled his shot just wide of the left post.

Tucker now made a change with Samson replacing McIlroy up top.

Fraserburgh had produced nothing in the final third yet they nearly levelled in the 63rd minute from a set piece. They won a corner down the left & when it came over Christie floated a header goal ward but Stephen Wilson was on the right post to clear.

A second goal for Talbot would’ve ended the contest & Graham Wilson had a great chance to grab it in the 69th minute. Samson did well outside the area, swivelling free of his marker before releasing Glasgow down the right. He burst into the area & pulled it back across goal where it landed at the feet of Graham Wilson 15 yards out but he lifted his shot over the bar with Leask stranded in no man’s land.

Pope became the 4th Talbot player cautioned when he conceded a free kick 25 yards from goal in the 78th minute. Cowie took the set piece but made a hash of it; curling his shot well over the bar.

In the 83rd minute Pope surged up the left & slung over a cross that Samson met at the near post; diving to meet it & send a header wide of target.

Young then picked up a caution for the home side for a late challenge on Hyslop.

The game was becoming stretched & Talbot twice had the opportunity to catch the home side on the counter-attack. On both occasions Talbot broke down the left & had Stephen Wilson free at the back post but couldn’t find the final ball.

With a minute remaining Tucker made a further change with McDowall coming on for Graham Wilson.

There was one final moment of drama when Fraserburgh almost produced an equaliser a minute into added time. The Bot defence were caught out by a ball over the top that found Davidson inside the area & he steered a 1st time shot from 15 yards that came back off the base of Leishman’s right post before Lyle put it behind for a corner which Talbot successfully defended.

Fraserburgh threw men forward deep into injury time but it was too little too late & Talbot held on to claim the win. A fantastic achievement for the Bot who have now made the 4th round of the senior cup for the 2nd time in their history. Next week it is back to the defence of the Scottish Junior trophy when Talbot travel through to South Lanarkshire to face Blantyre Vics. 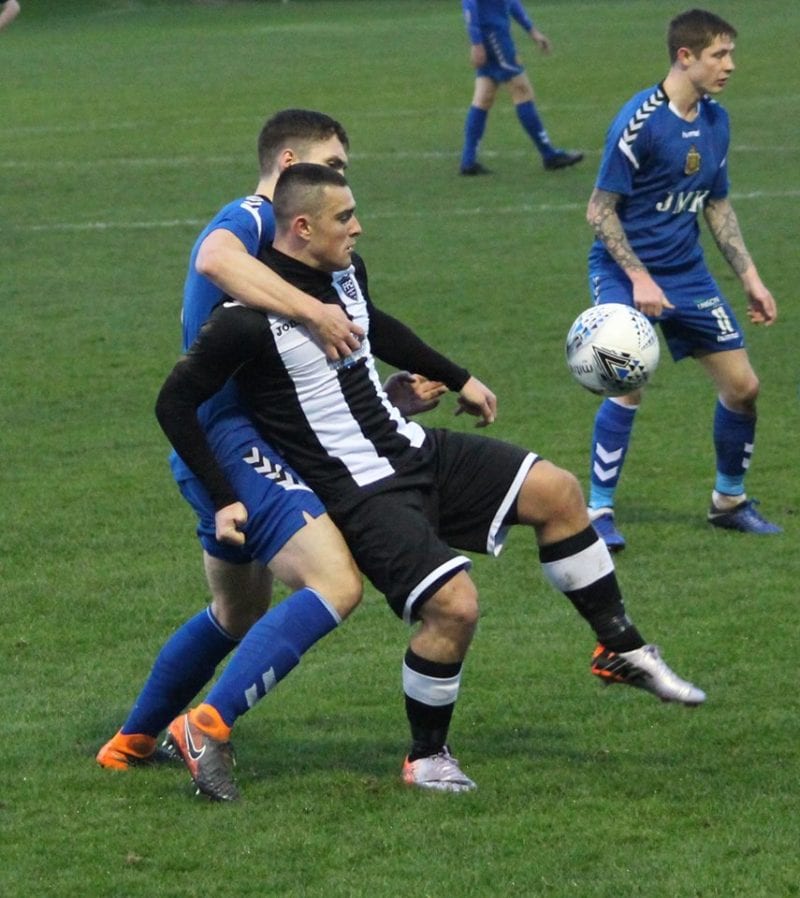 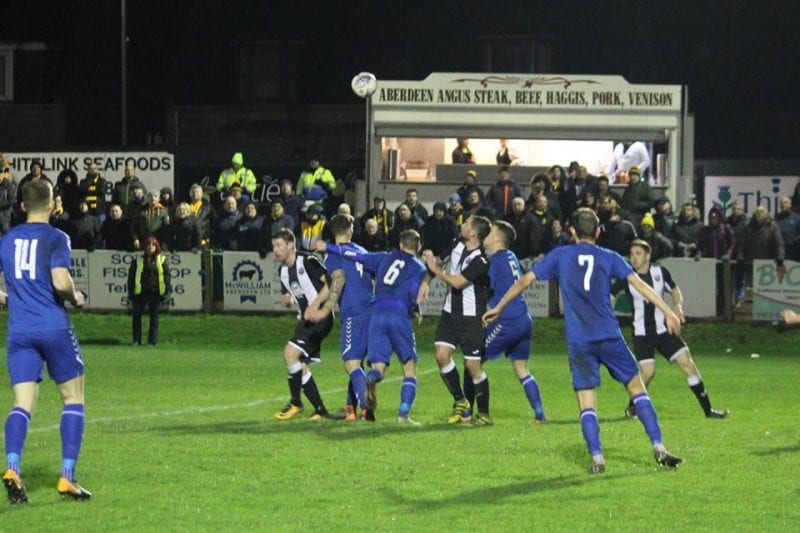