Talbot kept their winning streak going with a hard fought 2-0 win over the Peasies at Beechwood Park. 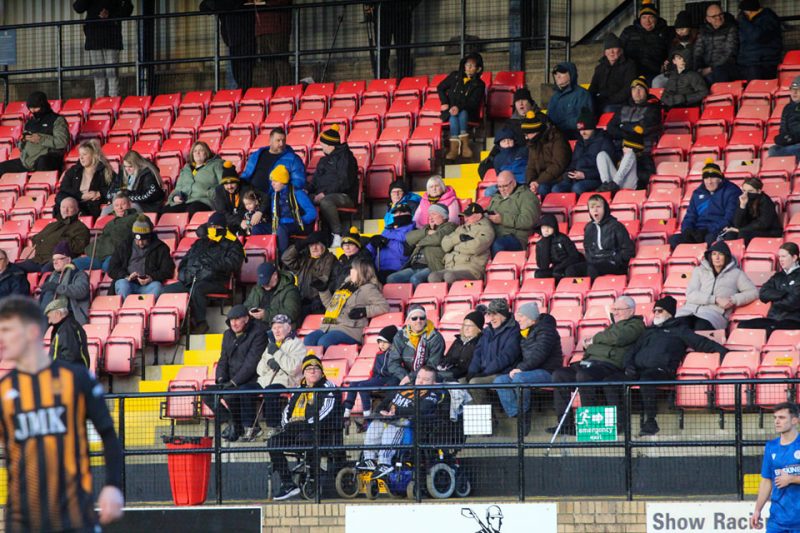 An early goal is good for settling the nerves and Talbot took the lead in the 9th minute. Shankland sent Boyle through on the right with a well-weighted pass and his ball across the face was blocked behind for a corner. When the corner came over McNeil couldn’t claim it, McCracken gathered with his back to goal and shoved it back to the 18 yard line where ALLY PARK hammered it straight into the roof of the net.

Three minutes later Talbot nearly unlocked the Peasies defence. Shankland slid a ball through to find Taylor racing in behind but McHugh did well to get across and clear.

Petershill’s first effort at goal came in the 13th minute. Nade took it down on his chest 30 yards from goal and opted to hit it 1st time – pulling his shot well wide of the right hand post.

On the quarter hour mark Shankland found Boylan on the left of the penalty area and he cut it back into the path of Park who saw his low drive blocked by a defender.

Aiden Wilson received a double blow in the 22nd minute. He received a caution for impeding Hepburn out on the touchline and took a heavy knock in the process and was unable to continue. Healy came on in his place with Park moving to left-back. 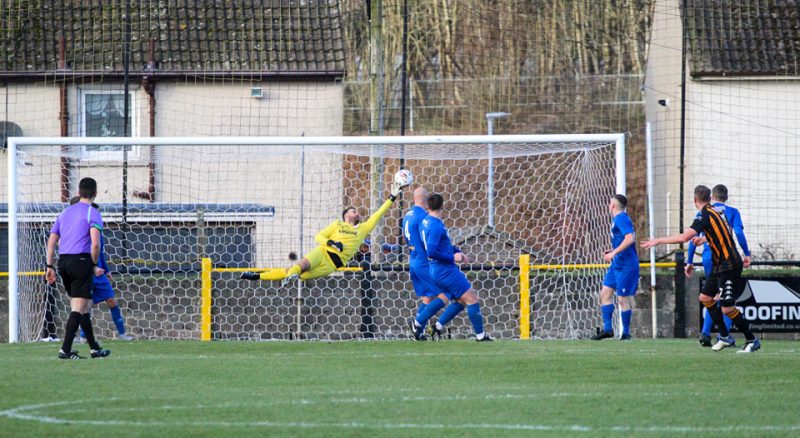 Leishman came to Talbot’s rescue in the 27th minute. A ball up the middle skited off the top of McCracken’s head and fell perfectly for Nade in the centre of the box but Leishman was quickly off his line to dive at his feet and touch it away.

Talbot’s next attack saw the ball moved from left to right to find Stafford on the overlap. He fired it into the centre where Boylan got across his marker but couldn’t direct his effort on target.

In the 37th minute Talbot had a good chance to double their lead. Boylan fed the ball to Taylor who raced down the wing before cutting it back into the path of Boylan 12 yards out but his shot lacked power and failed to trouble the keeper.

Shortly after, Talbot won a free kick 25 yards out which Shankland got over the wall but well wide of the right post.

Three minutes from the break Talbot were almost undone after an error in midfield. Talbot players left the ball to one another and Petershill were able to slide a pass through to Nade in the area. He looked a cert to score but McPherson got back to make a great sliding tackle to nick it away just as he was about to shoot. 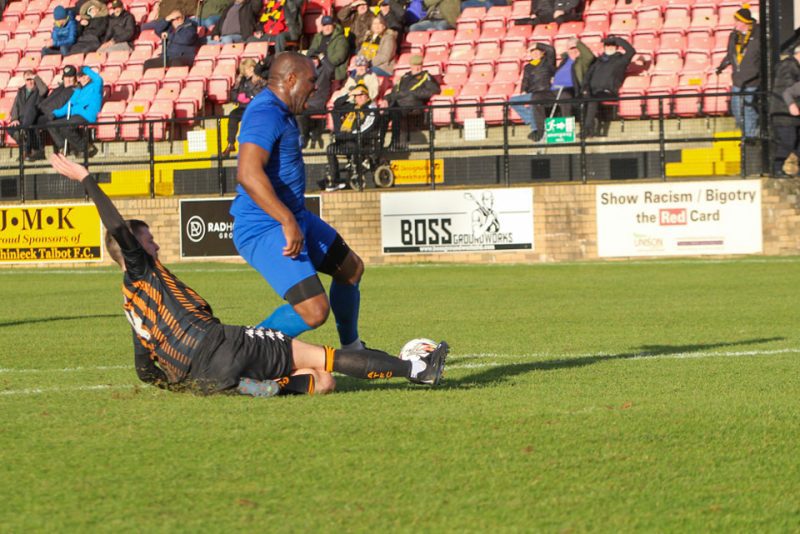 A minute later play switched to the other end where Shankland let fly from 20 yards only to see McNeil produce a top class save to his right to keep it out and Talbot saw the half out to go in a goal ahead at the break.

Talbot started the 2nd half strongly and within a minute of the re-start Taylor raced down the wing before releasing it to Boylan whose low ball across goal was cut out by McNeil.

McCabe had his name taken in the 53rd minute when he took out Taylor as he looked to speed down the wing. The free kick was taken short and worked to Taylor who paced past McHugh and slung a good cross to the back post. The defence managed to head it clear and it came out to Boyle just inside the box but he misjudged the flight and took a fresh air swipe at it.

In the 56th minute Talbot won a free kick 25 yards out when Shankland was caught as he tried to pass it to Healy. Shankland took the set piece and curled it beyond the far post where McPherson guided a header back across goal but the defence were first to react and clear. 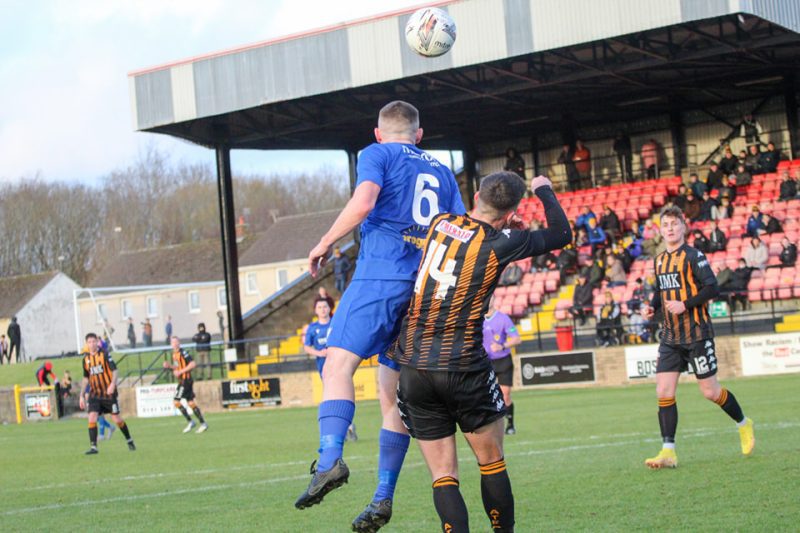 With an hour gone Talbot came close to grabbing their second. Shankland passed it inside to Boylan and he laid it into the path of Boyle who burst into the penalty area down the left side; however, McNeil did well, coming off his line to dive at Boyle’s feet and the ball cannoned off him and behind for the goal kick.

Two minutes later Hepburn slid a ball in from the right that landed at the feet of Nade inside the 6-yard area and he shot into the side-netting but the assistant’s flag was raised and it wouldn’t have counted in any case.

Tucker now made a double change with Samson & Graham Wilson coming on for Shankland & Taylor.

Petershill threatened a leveller in the 68th minute. Nade chested the ball out to Hepburn on the wing and he swung a cross over to the back post. Stafford managed to head it away but it came straight out to Aubrey on the left of the box and Leishman was well-positioned to save his powerful drive at his right hand post.

With 69 minutes on the clock Gracie became the 2nd Peasies player in the book when he was cautioned for going through the back of Healy.

Two minutes later and Talbot got the 2nd goal they needed. Samson won a corner out on the right which Healy delivered into the centre where CRAIG MCCRACKEN looped a header under the bar and over the defender on the line to put Talbot 2-0 ahead. 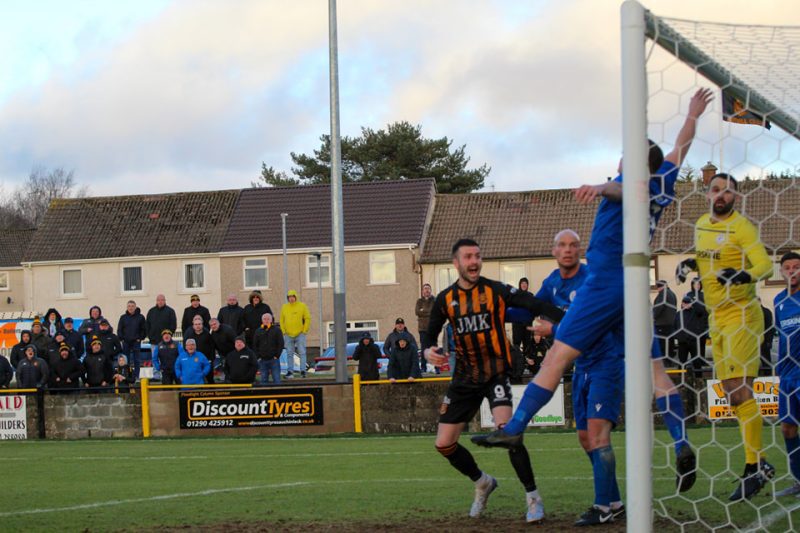 In the 80th minute a cross in from the left was only partly cleared and came out to Aubrey on the 18 yard line who drilled a powerful shot on target but straight at Leishman.

Play then switched to the other end where Mason whipped a good cross in from the left toward Samson that the defence did well to head clear.

Healy had a half chance to extend Talbot’s lead in the 82nd minute. The ball came to him in space 20 yards out but he got underneath it and blazed his shot over.

Within a minute Talbot had another opportunity. Smith could have went for goal himself from the edge of the box but instead slipped the ball to Mason in space on the left of the area but his shot went tamely at McNeil.

The same two players were involved in Talbot’s next attack. Smith head flicked it inside to find Mason just outside the box. The ball wouldn’t come down for him and he had to take it on the volley – firing it high and wide of the far post.

In the 84th minute Nade was booked for dissent. 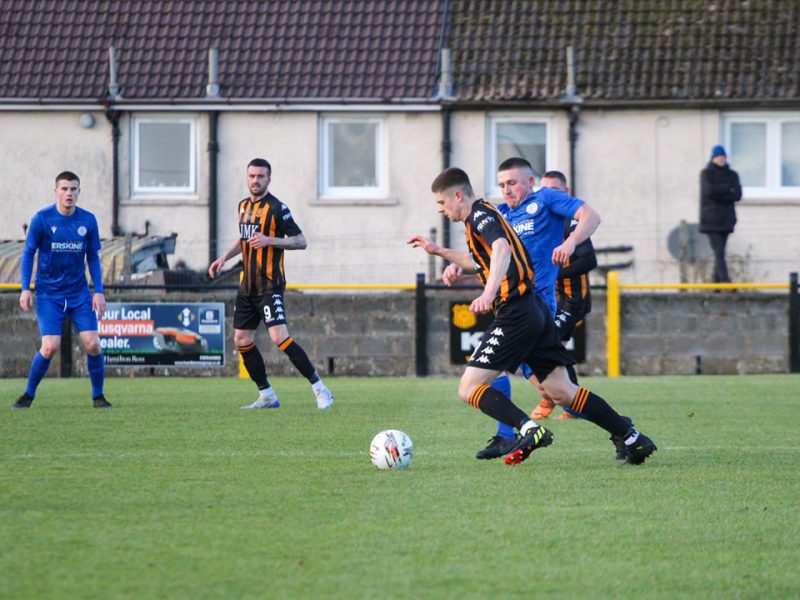 Three minutes from time Talbot won a corner down the right when Smith’s cross beyond the back post was headed behind by Cappie. Healy hit the corner into the near post where Samson’s attempted volley was blocked behind for another corner. This time it was delivered to the back post where McCracken met it but this time his header flew over the bar.

Talbot were still pushing forward and twice came close to adding to their tally. Smith cut in off the left and fired a low shot that looked to be sneaking inside the near post but McNeil got down to turn it behind for the corner. When the corner came in the defence couldn’t clear it and Talbot worked it back to McPherson in space on the edge of the box and his low drive looked to be heading into the bottom corner but again McNeil produced a good stop – diving low to his right to make the save.

As the game moved into added time Healy picked up a yellow card and Talbot saw the remaining injury time out with no alarms to secure all 3 points.

A good win over a Peasies side who looked better than their league position would suggest. Next up for Talbot it’s the visit of Broxburn in the South Challenge Cup next Saturday.

SPONSOR’S MAN OF THE MATCH AWARDS 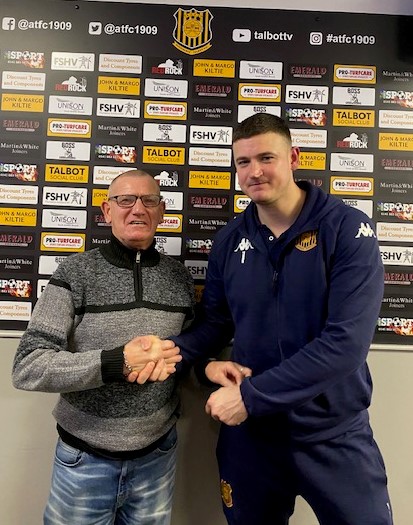 The Mauchline BC award was won by Gareth Armstrong and was presented by Johnny Eaglesham. 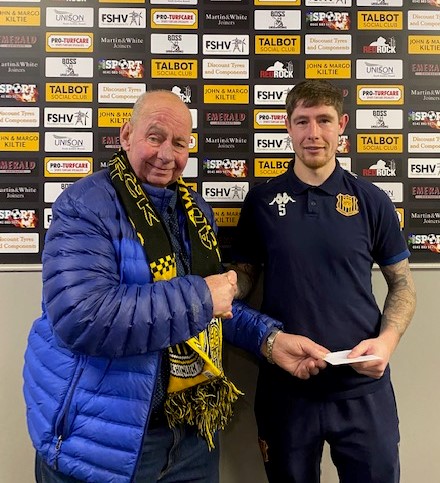 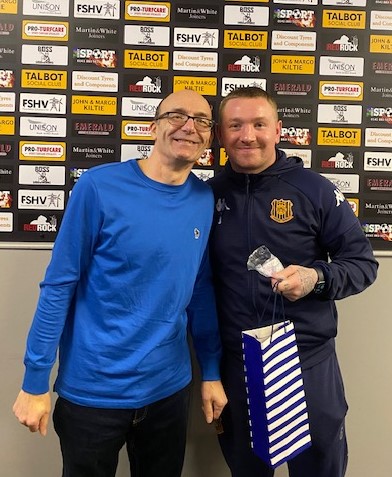