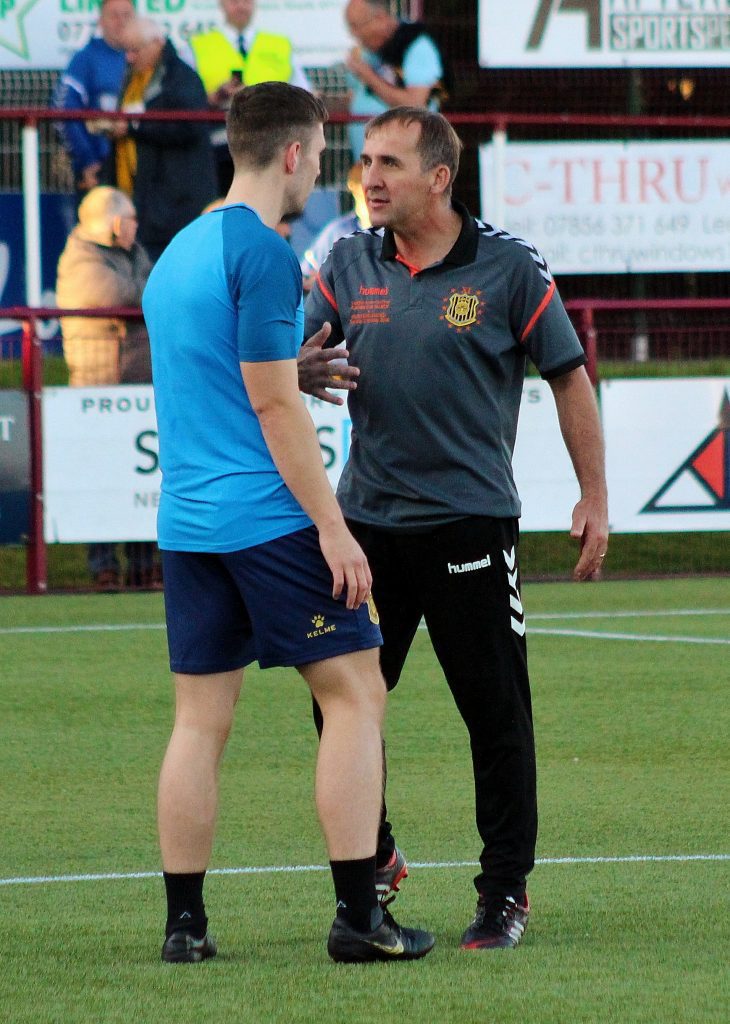 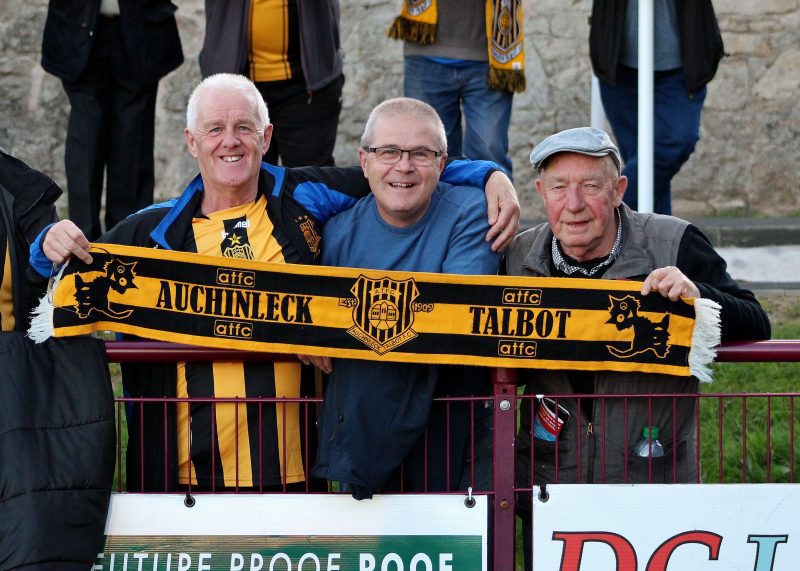 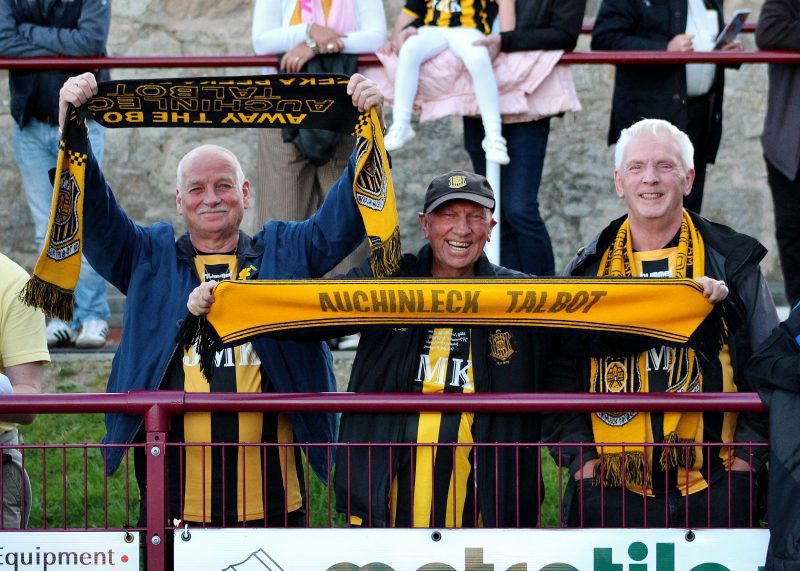 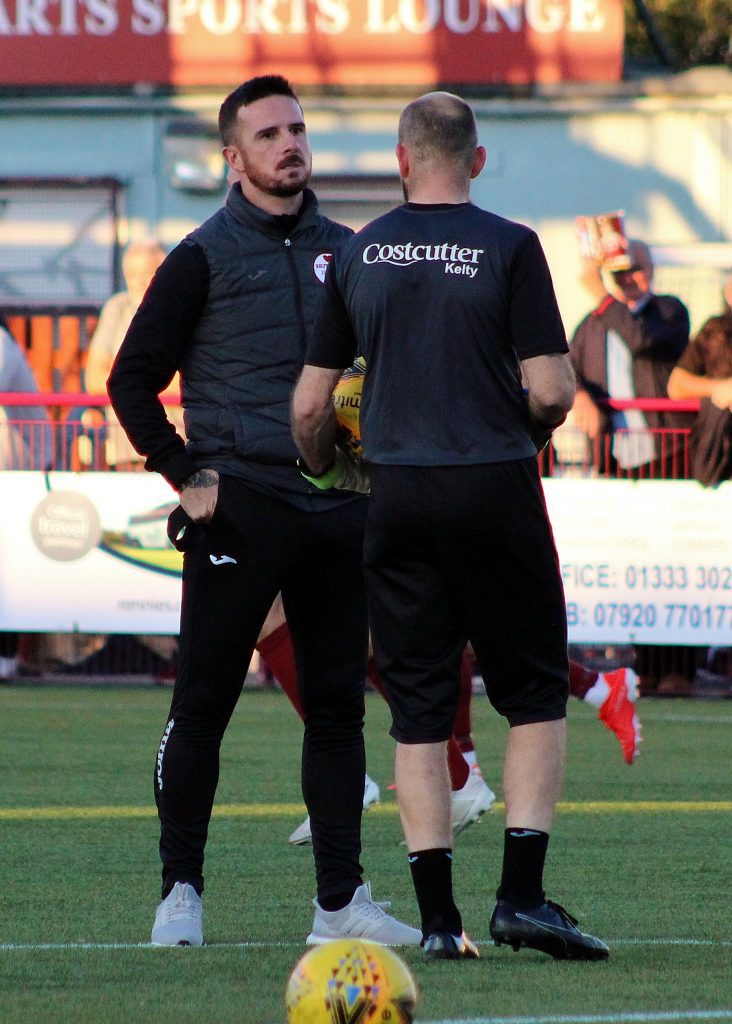 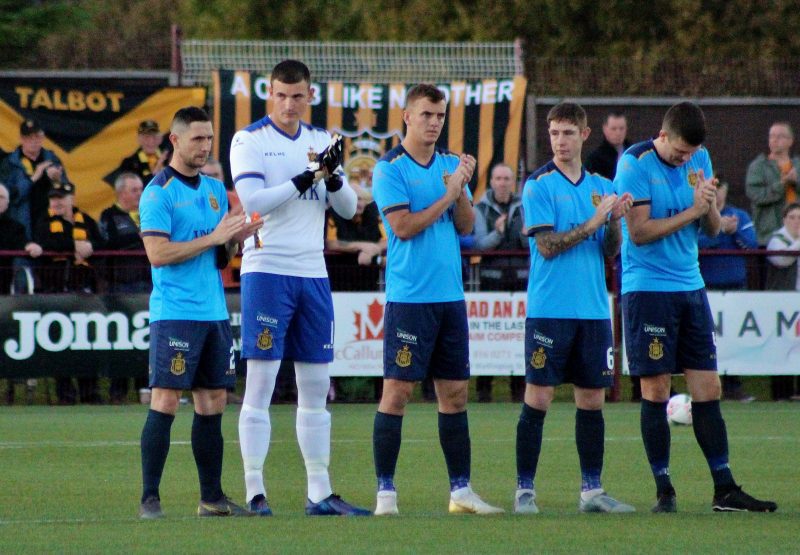 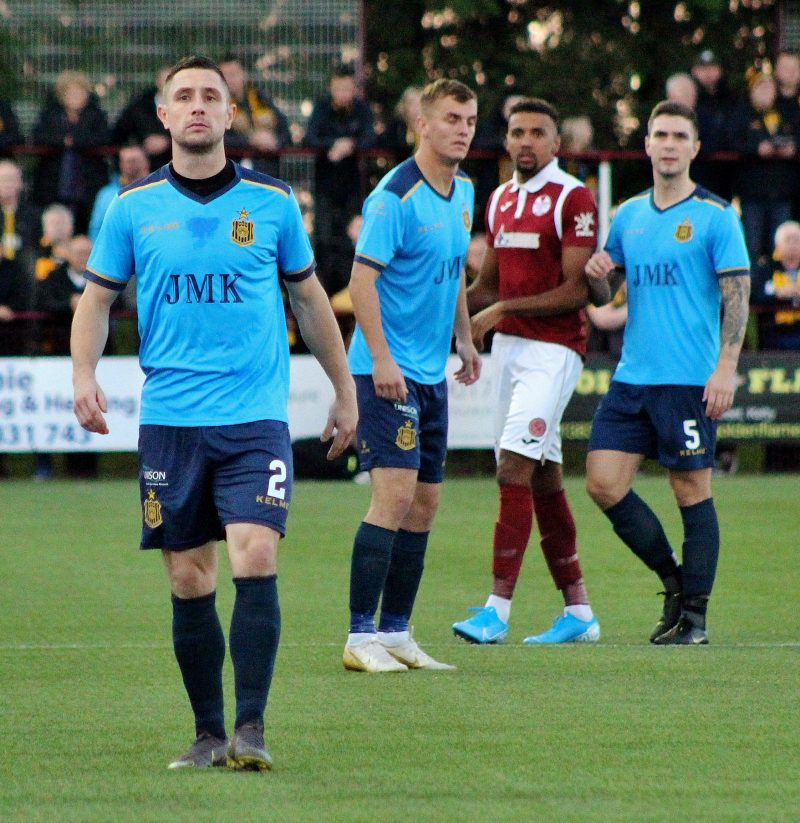 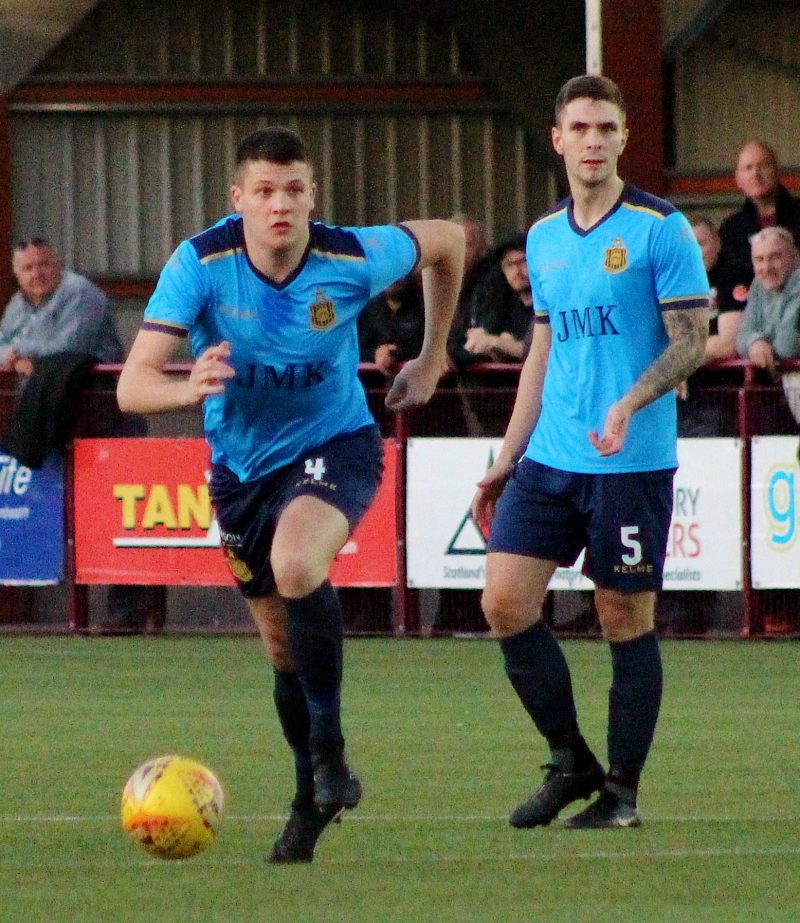 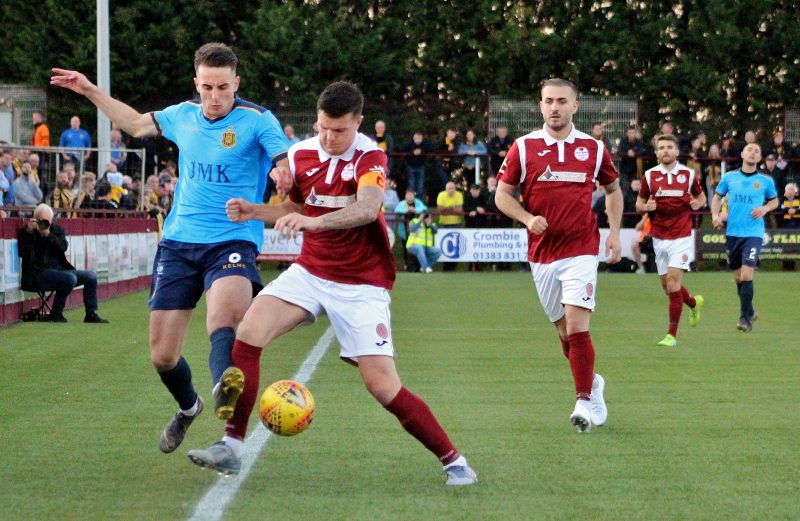 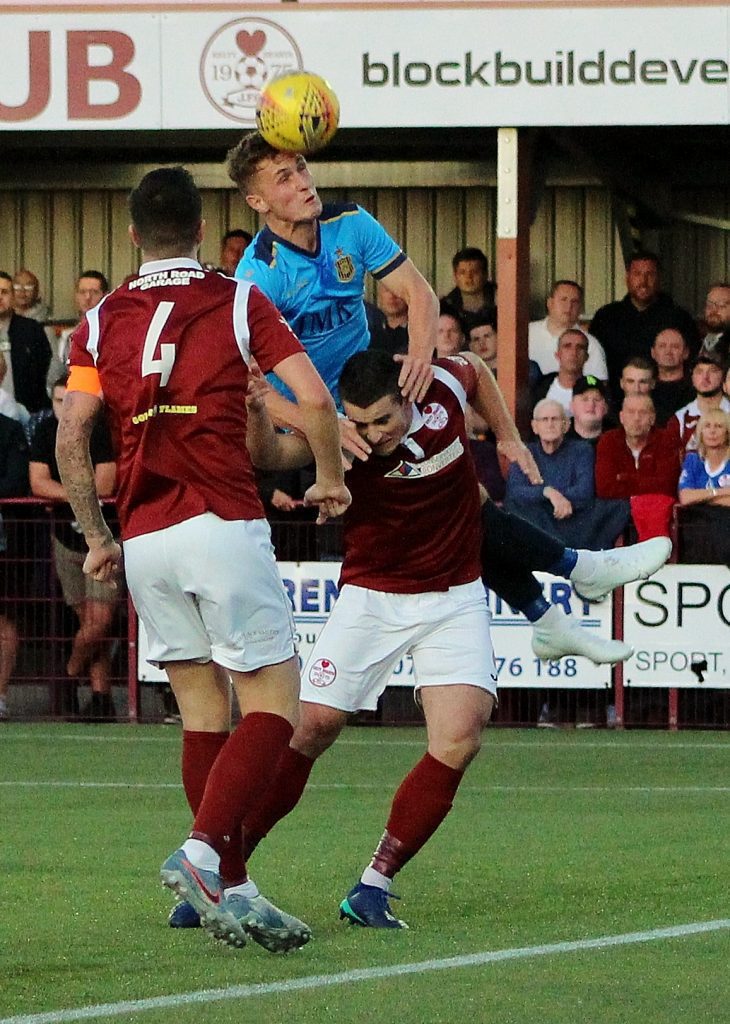 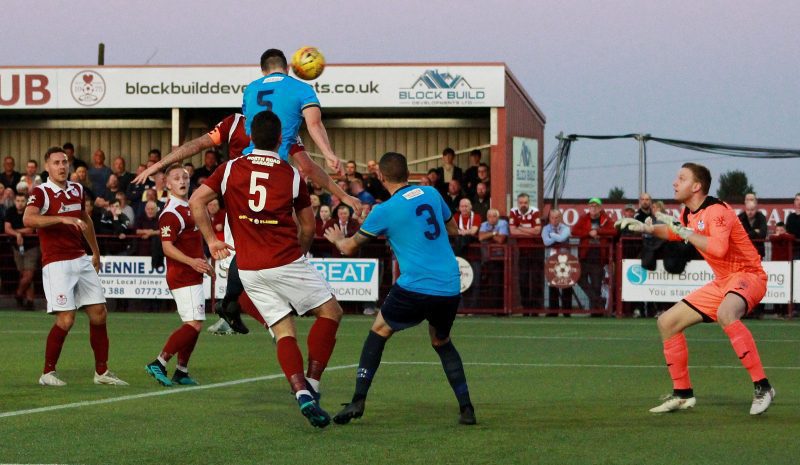 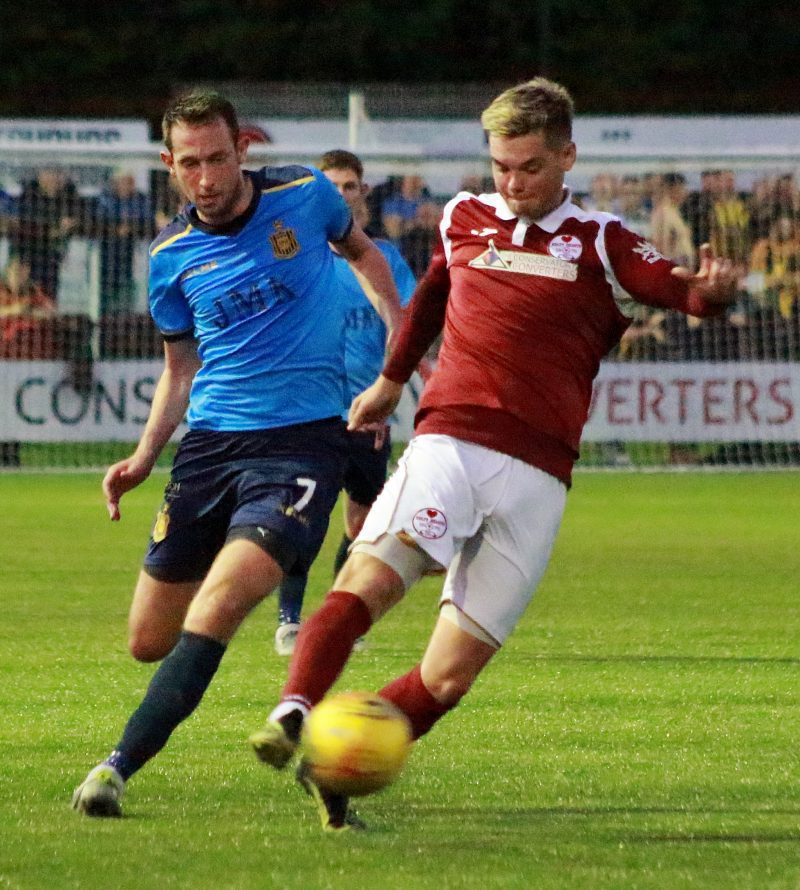 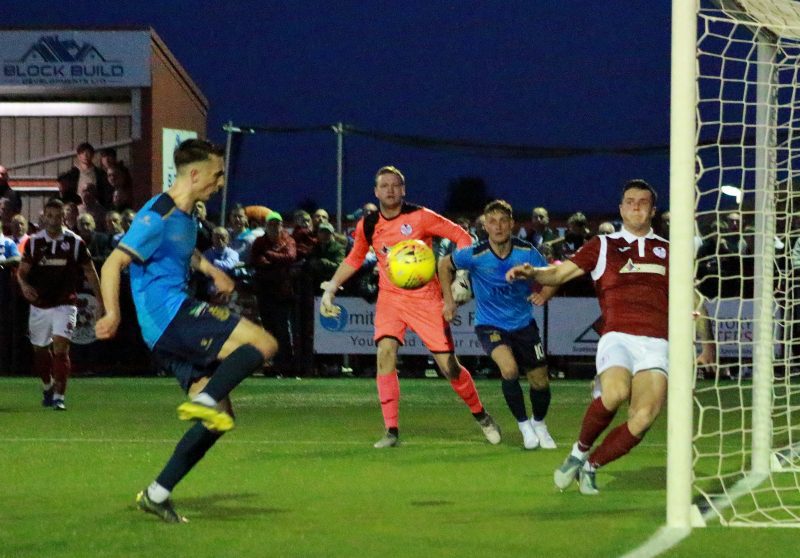 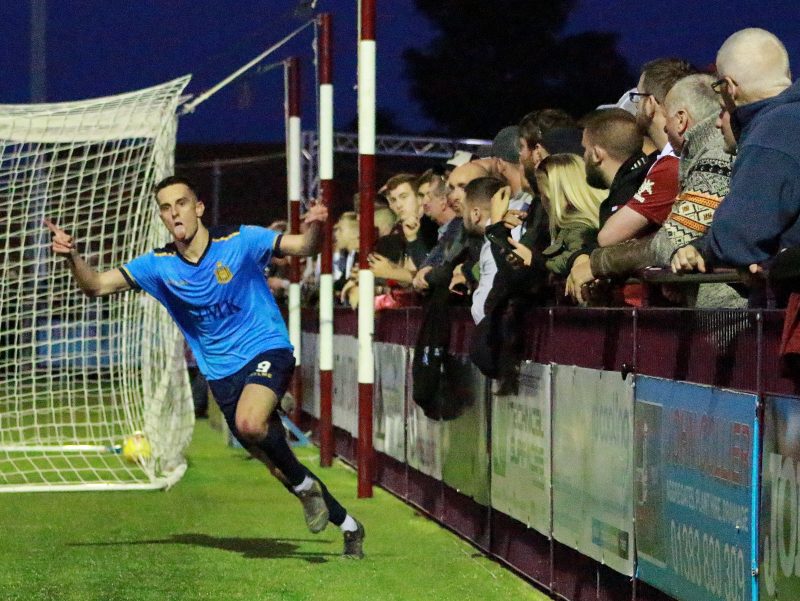 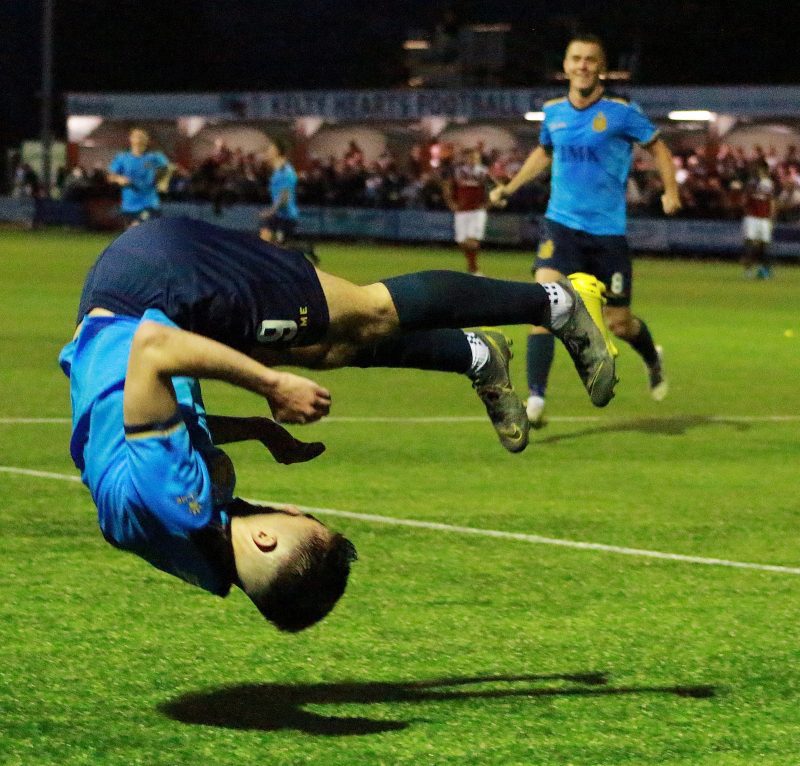 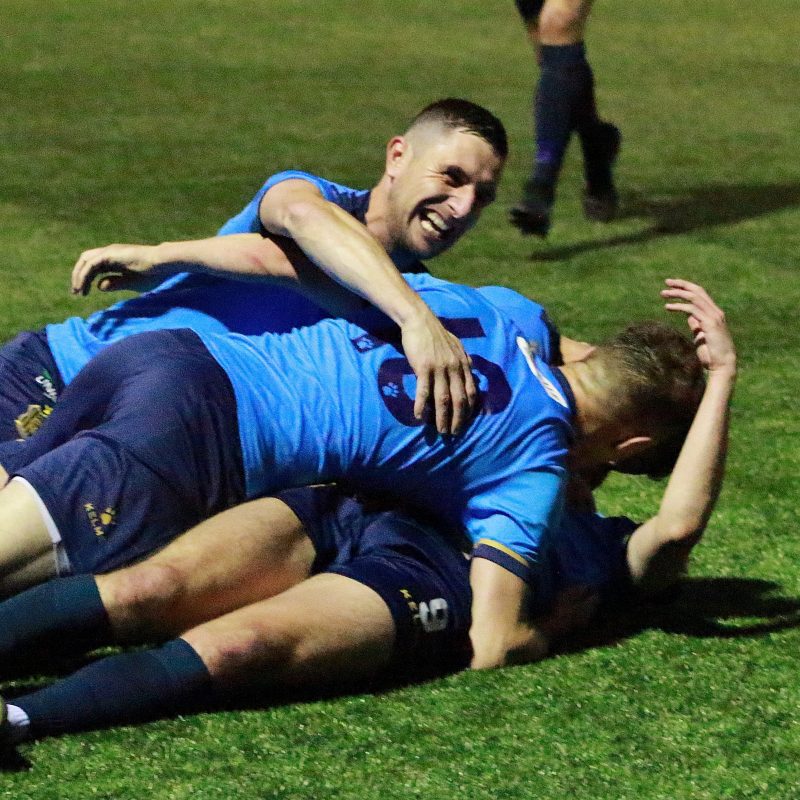 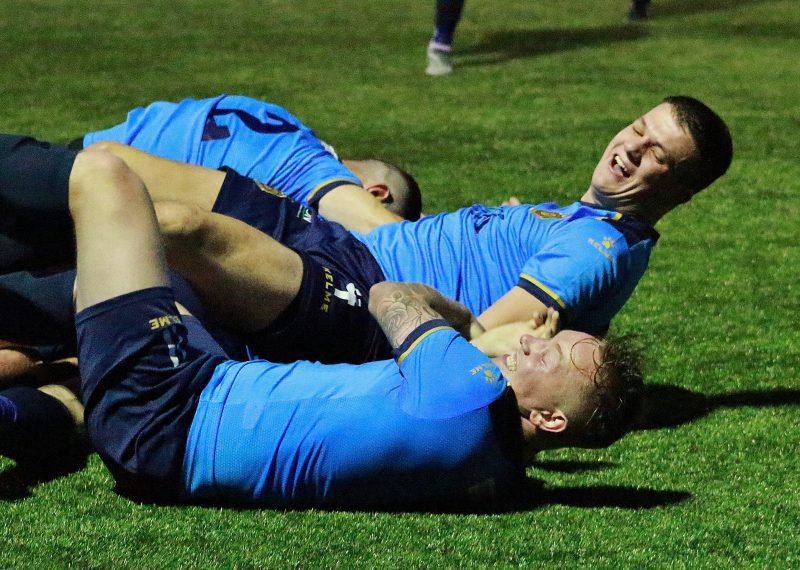 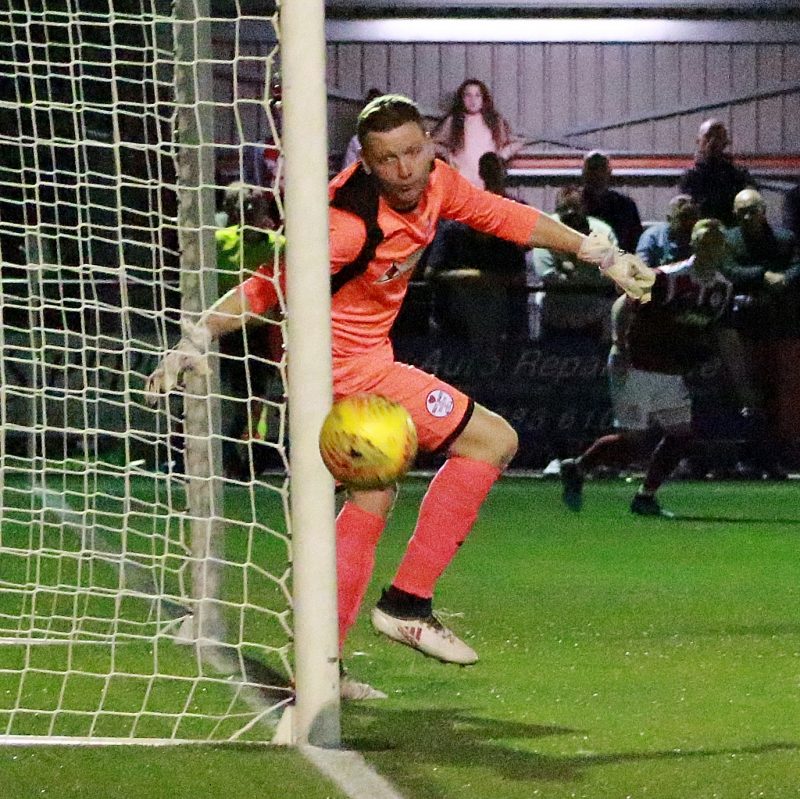 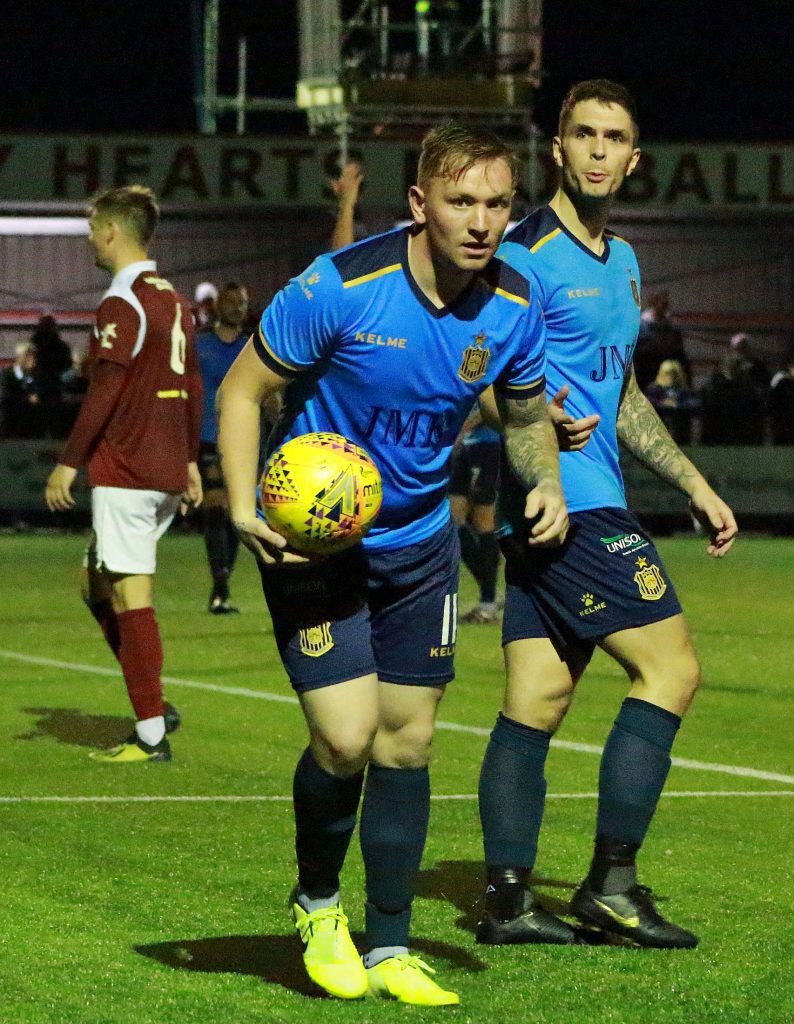 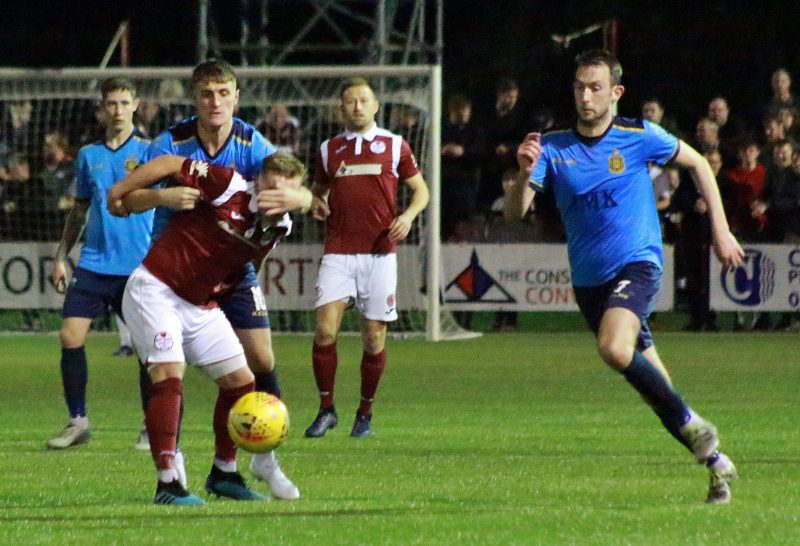 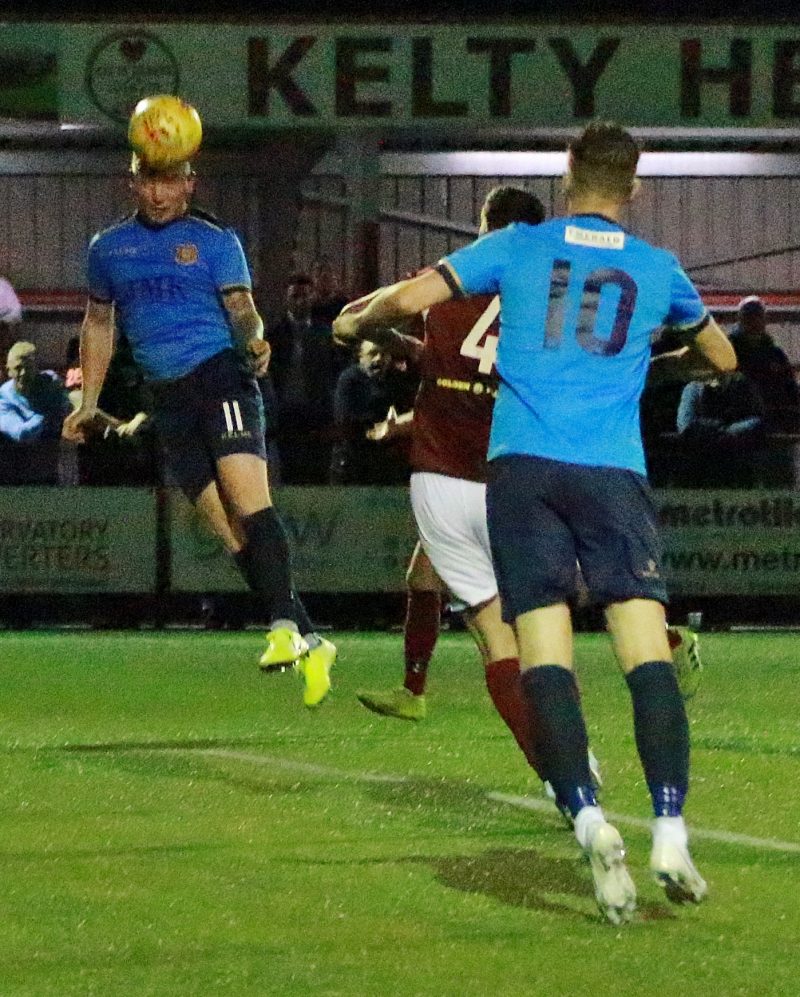 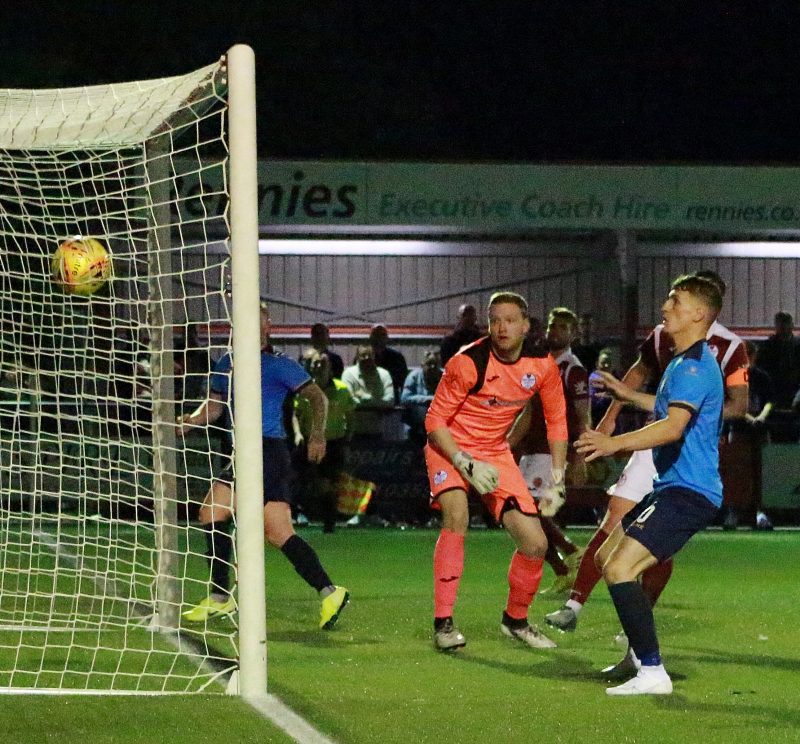 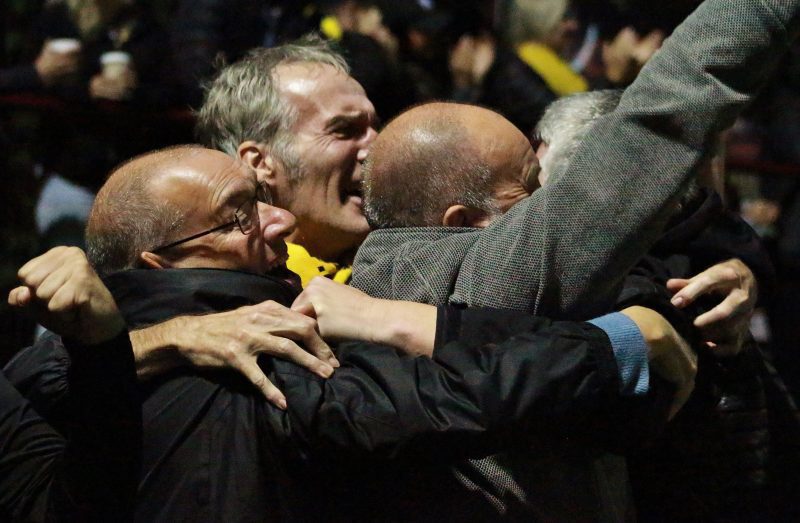 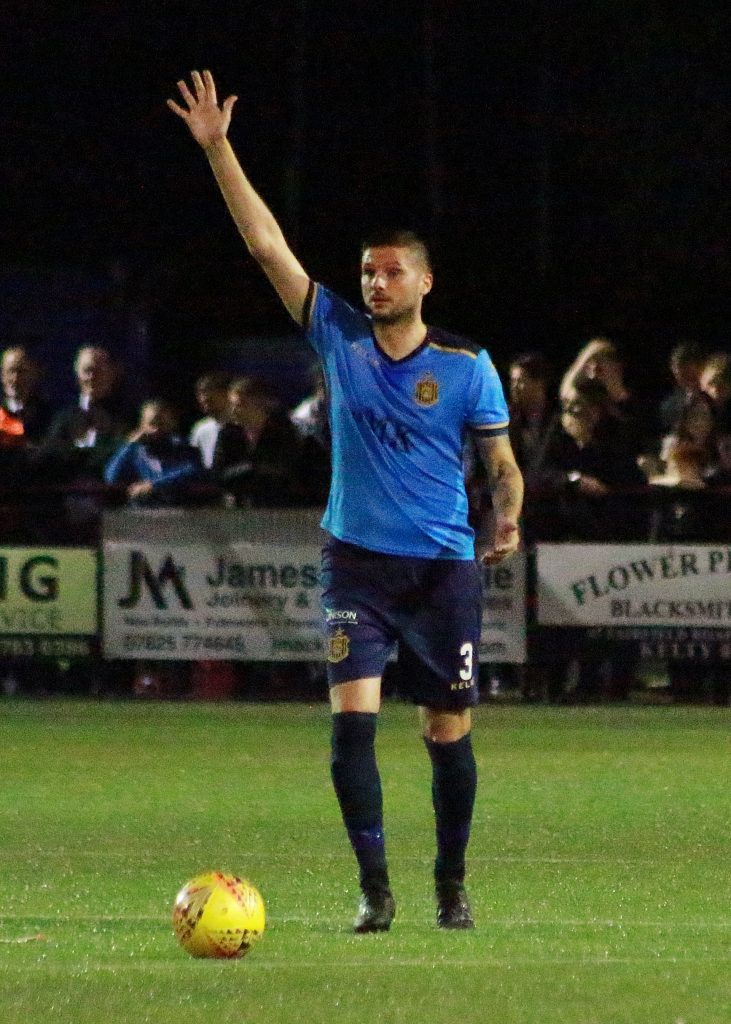 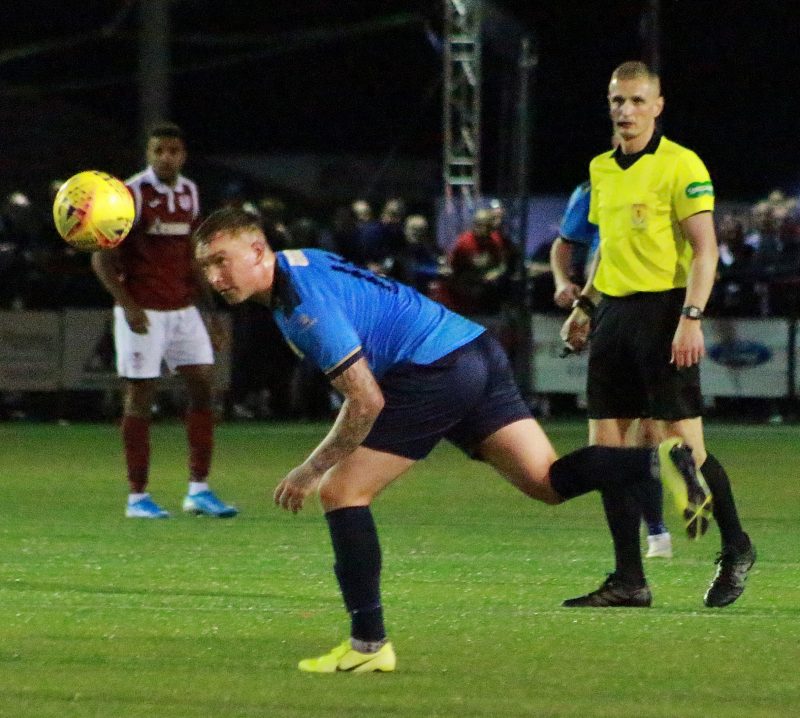 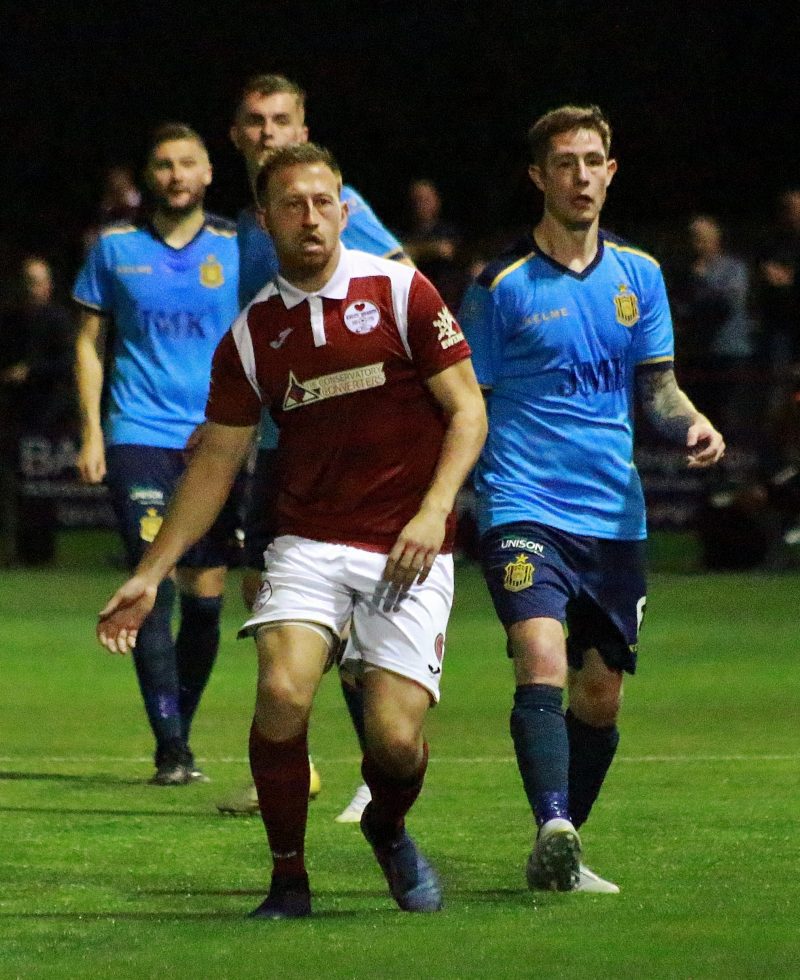 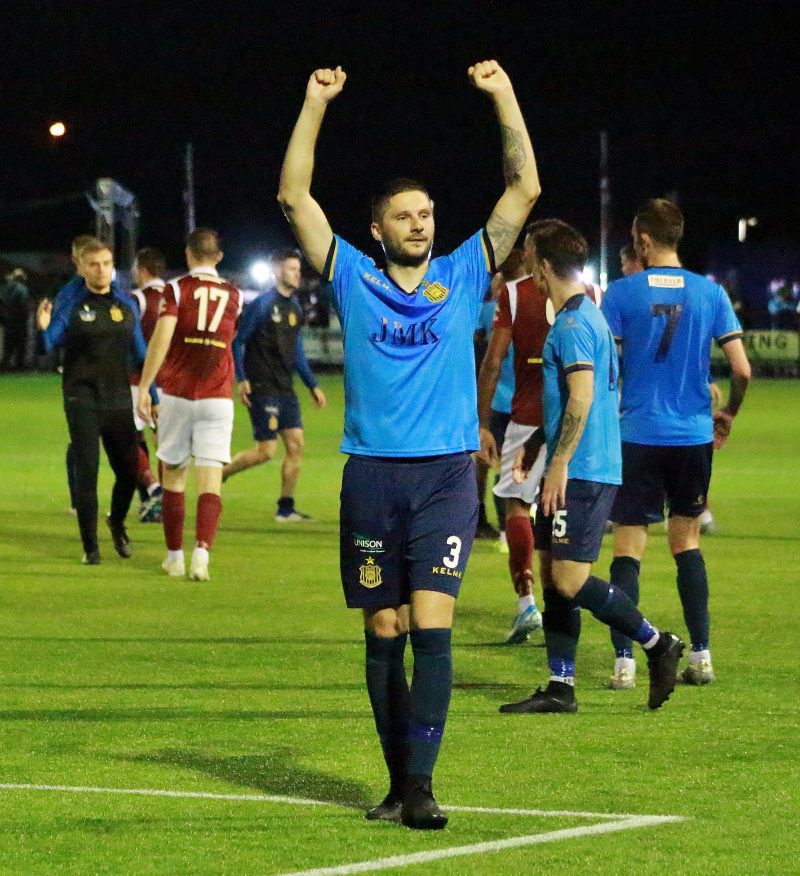 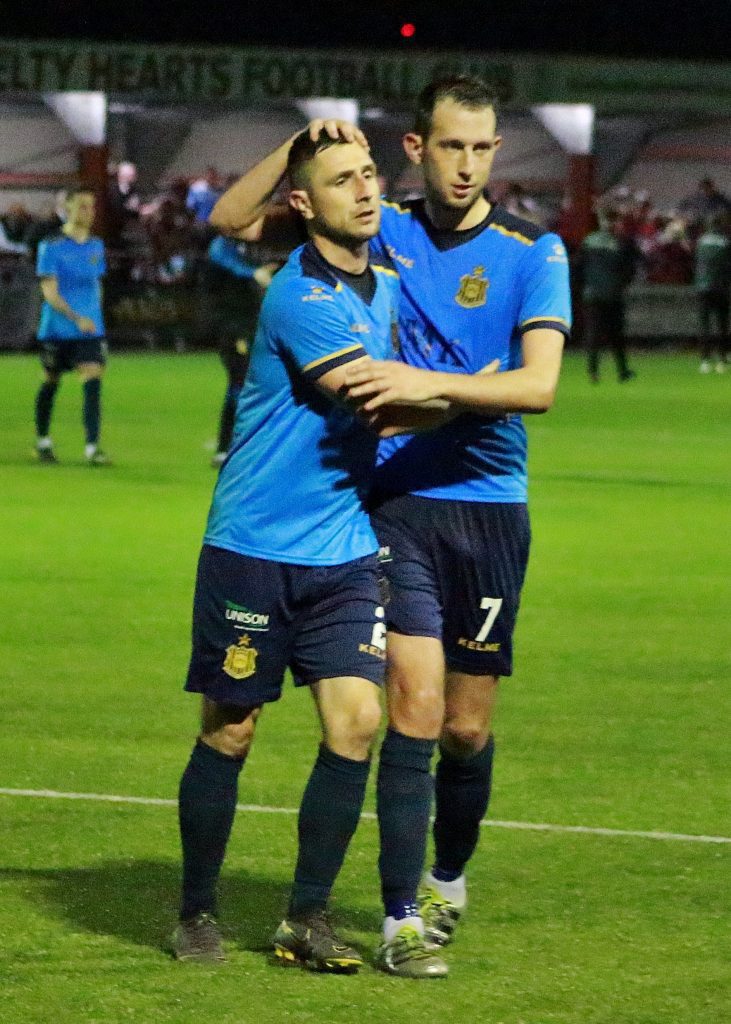 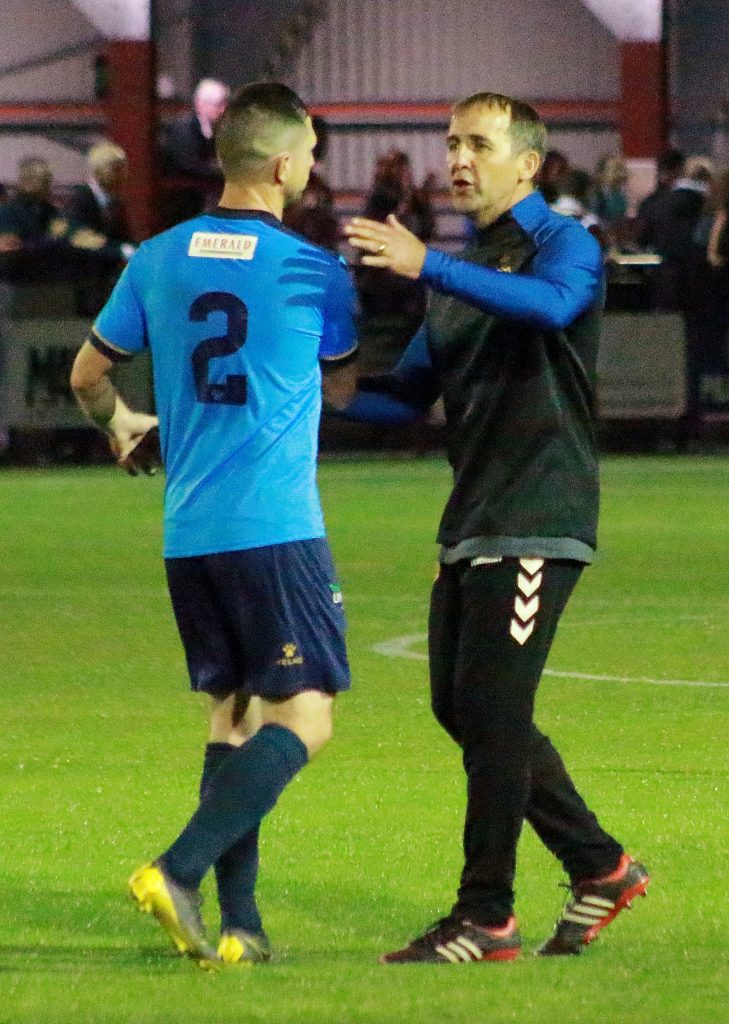 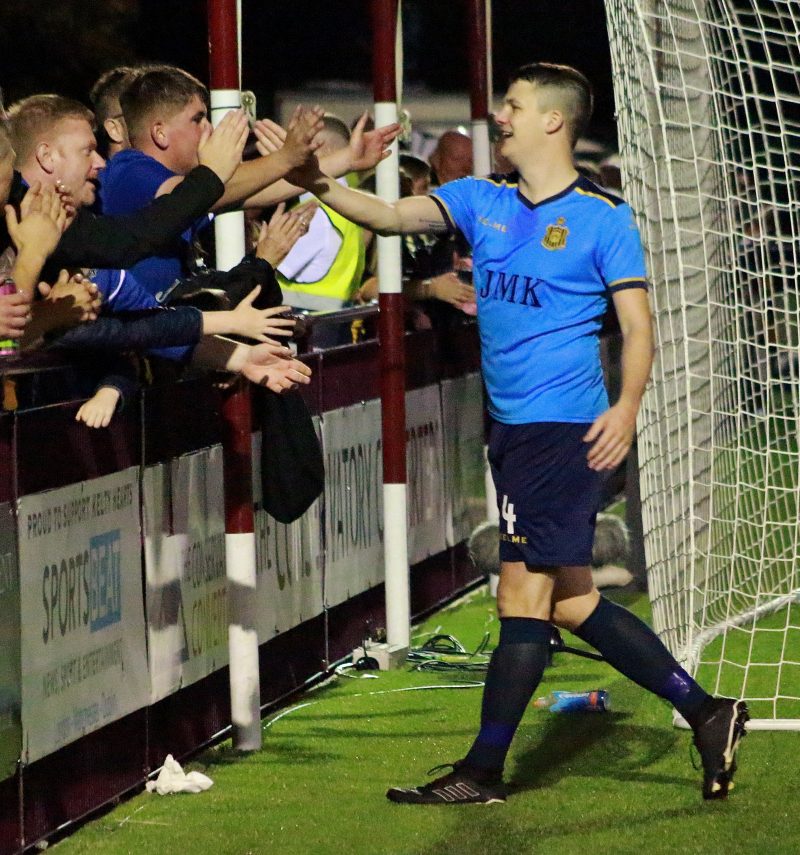 No strangers to the tv, Talbot once more rose to the occasion, imperiously sweeping aside the much fancied Kelty Hearts to book their place in the 2nd round of the senior cup.

The last time Talbot travelled through to the kingdom of Fife to face Kelty the tie had to be re-located to Ballingry as Kelty’s park was permanently unplayable but that wasn’t an issue this time round as the big spending Lowland league outfit have redeveloped their ground to a top of the range artificial surface with matching surroundings.

The Bot nearly made the perfect start within a minute of kick off. Shankland picked up a loose ball 25 yards out and let fly with an effort that swerved just wide of the anxious Mackenzie’s right post.

Kelty now settled into a pattern of play they rarely deviated from; content to keep easy possession deep in their own half before pinging long balls at a resolute Talbot defence.

Talbot’s first effort on target came in the. 11th minute. Pope fired a cross over that Samson headed back across goal & Graham Wilson out-jumped his marker but his header went straight at Mackenzie.

Kelty were having plenty of the ball but doing little with it & the next opening came Talbot’s way in the 11th minute. Shankland slipped a pass through toward Samson on the left of the area but the keeper was quickly off his line to make the challenge.

The opening goal came after 20 minutes and it had echoes of Talbot’s winning goal against Ayr United. Graham Wilson was up-ended by Russell out on the left touchline & Shankland whipped over a tremendous delivery to the far post where CRAIG MCCRACKEN raced onto it to bullet a header home.

Kelty had a half chance to pull back level a few minutes later. Husband fired in a decent ball from the right that broke off a defender toward Dodd but his low drive from 15 yards was blocked by McCracken then cleared by Lyle.

Kelty were making less headway than a feather heading into a headwind and Talbot threatened again in the 38th minute. Shankland pounced on a loose pass down the left & switched it inside to Graham Wilson who laid it back out to him on the wing. He drilled it low into the near post where Carstairs knocked it away for a shy.

Talbot kept the attack going and Pope whipped over a cross that Hyslop sent crashing off the right post with the keeper stranded.

The Bot were ending the half on the front foot and opened the Kelty defence again in the 40th minute. Shankland slid a pass through to Samson racing through on the left of the area and he drilled it low into the side-netting.

With half-time looming Talbot doubled their lead. Stephen Wilson lifted it up the left for his brother Graham to chase and he put Ashe under severe pressure. The Kelty defender fluffed his header back & Wilson latched onto it & tried to lob the advancing keeper. Mackenzie got a hand to it but the ball sailed through to KEIR SAMSON who hammered it home from close range at the far post to send Talbot in with a deserved two goal cushion at the interval.

Kelty had offered precious little so it was no real shock to see them make a change at the interval with Husband making way for Philp.
Talbot have a good habit of starting the 2nd half from the off & Tucker’s half-time team talk did its work again as the Bot got off to a flyer.

Within two minutes of the re-start Graham Wilson picked the ball up on the right & surged forward before floating a cross toward the back stick that had Mackenzie scrambling to turn it behind for a corner. Cennerazzo managed to head Shankland’s corner clear at the near post but only out to Stephen Wilson who plunked the ball back out to Shankland who promptly forced a 2nd corner. This time Shankland whipped it into the centre where Mackenzie only just beat McCracken to it under the bar to punch clear.

Talbot’s next attack saw Kelty’s captain in the book as Carstairs was forced to haul Stephen Wilson down he threatened to race clear. Pope took the free kick and in a trademark Talbot move he angled the ball toward Hyslop who easily out-climbed Cennerazzo to head it across goal where MARK SHANKLAND guided a header back across goal and into the top corner. Shanks leaped the fence to celebrate with the fans and picked up a booking for his troubles but with the game done & dusted no Bot fan minded.

Kelty were incapable of coping with Talbot at set pieces and the Bot nearly added a fourth in the 53rd minute. Stephen Wilson’s shot was deflected behind for a corner on the left and when Shankland fired it over McCracken was inches from connecting at the back post.

The home side had been muted but they did have an opportunity to snatch a goal back on the hour mark. Dodd lifted a cross over that Austin headed on toward Philp at the back post but he mis-controlled it and the ball ran through tamely to Leishman.

In the 63rd minute Kelty made their second change with Ritchie on in place of Dodd.

The Fifers picked up their 2nd caution of the evening with 65 mins gone when Russell slid in late on Hyslop; resulting in a Bot free kick out on the right. Shankland again produced a top class delivery & McCracken looked a cert to grab his 2nd from close range but Mackenzie saved his header on the goal line.

Kelty had a half chance to grab a consolation in the 72nd minute. They put together a good move down the right that ended with Austin firing a shot on target that Leishman blocked at his near post.

With quarter of an hour remaining Talbot nearly added a fourth. Pope combined well with Samson down the left before Samson cut in off the left flank & curled a shot just past the far corner with the keeper scrambling.

All Kelty were playing for now was their tattered pride & Philp had a half chance to pull one back in the 83rd minute. Reilly made a good run forward before releasing it to Ritchie who blazed over from 20 yards.

Leishman had been as much of a spectator as the Bot fans partying behind the goal but demonstrated that he’d kept his concentration when he pulled off a top class save to deny Kelty a late consolation with 5 minutes remaining. Cennerazzo waltzed in off the right wing & curled a shot toward the far corner which Leishman flew through the air to turn wide of the post.

As the clock ran down Talbot made a flurry of late changes with Graham Wilson and Shankland making way for Glasgow and White and then Healy replacing Samson.

The noisy travelling support raised the volume levels up a notch at the final whistle as the Bot fans celebrated a superb team performance and a comfortable win. Next up for Talbot it is a return to cup action as they begin their defence of the Scottish Junior cup at Beechwood against Bellshill Athletic.