This proved to be a game of one half with Talbot securing all 3 points after stepping up a gear in the 2nd period after a forgettable first half.

Talbot started the game positively but without forcing any clear cut chances. In the 8th minute Wardrope worked a one-two with Aiden Wilson before cutting in off the left but his shot flew wide of the left hand post.

The next notable effort came in the 18th minute when Taylor drifted in off the right onto his left foot and sent a shot wide of the right post.

Largs had barely been out their own half but thought they’d taken the lead in the 20th minute. Leishman’s clearance went straight to a Largs player who hoisted it straight back down the centre. It skidded off a Talbot head into the path of Ramsey who tucked it into the net but the assistant’s flag had went up early and the goal was chalked off for offside. 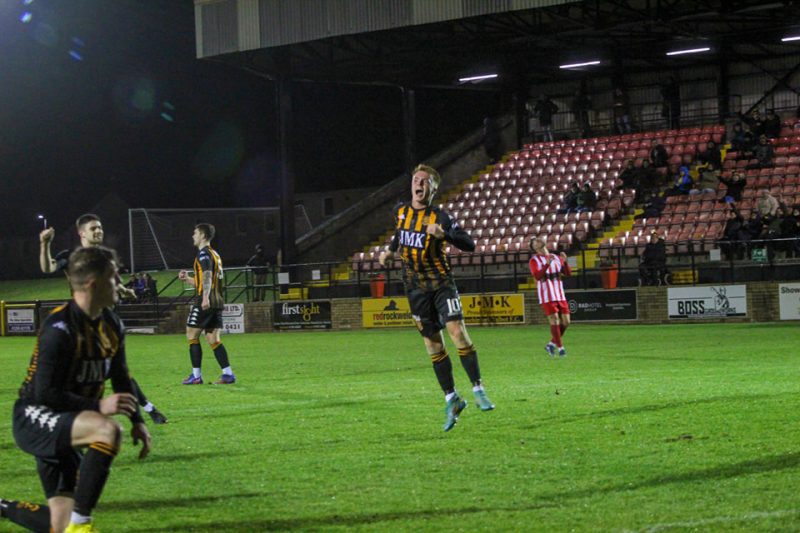 Wardrope had a half chance in the 23rd minute when Graham Wilson found him inside the area but his shot from 16 yards trundled straight at the keeper.

McPherson came to Talbot’s rescue in the 26th minute. Ramsey burst into the area and looked set to press the trigger but McPherson slid in to make a crucial tackle.

Talbot had a great chance to take the lead in the 29th minute. The Largs defence failed to cut out a ball to Graham Wilson and he fed it to his right to find Taylor in space inside the area; however McGowen spread himself well to block his drive at the expense of a corner.

The Largs keeper produced another good stop in the 32nd minute. Mason controlled a ball up the left before knocking it inside to Graham Wilson on the left of the area. He fired a low drive on target from a tight angle that the keeper saved with his legs.

At the tail end of the half Talbot were denied the lead by an impressive double save. Taylor released Boyle down the right and when he squared it across Mason met it 6 yards out only for McGowen to block his effort. The rebound came to Wardrope who drilled it low on target but the keeper recovered to make the save and Talbot couldn’t force it home with Largs able to hang onto the interval.

The visitors made a change at half-time with McLeod on for Tennent.

The Bot started the 2nd half strongly forcing a couple of corners soon after the re-start which the Largs defence coped with. In the 49th minute Taylor did well to steal the ball at the bye line as Devine tried to let it out run out. He made it into the penalty area where his cut back was cut out and ran into the path of Armstrong. He went for goal from 18 yards and his shot across goal was deflected over the bar by Mason.

Talbot’s next attack saw Boyle on the left side of the penalty area and he touched it inside to Mason who had a half chance to hit it early but took a touch and was crowded out.

Largs had a lucky escape in the 54th minute. Wardrope lost out in a 50/50 with Devine but the ball broke to Taylor who swept it 1st time across the area where Graham Wilson looked set to score but he scooped it over the bar from 6 yards out. 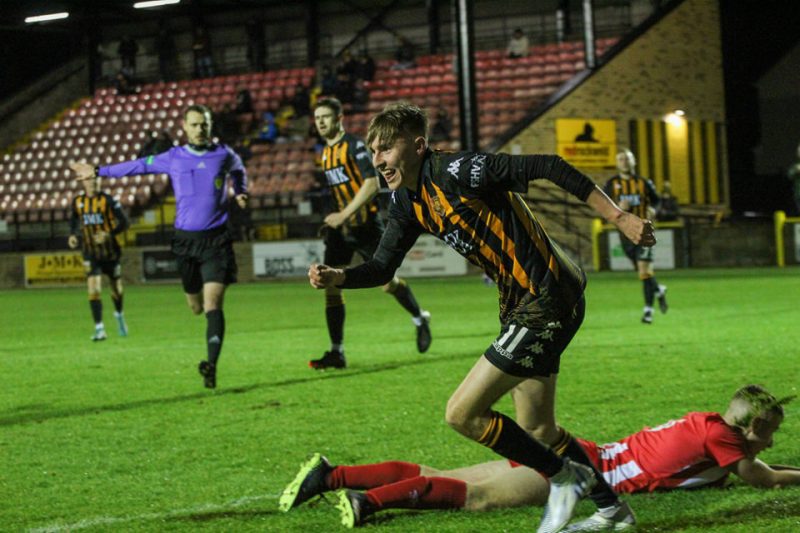 Two minutes later Talbot were again on the attack. Boyle helped it on down the right where Graham Wilson paced down the wing before cutting it back into the penalty area for Mason but he couldn’t get it out of his feet and he prodded it wide of the left post.

Eventually Talbot’s pressure told and the Bot took the lead in the 59th minute. Taylor got free on the right and fired a low ball into the box that Wilson just missed and AARON MASON placed it low inside the left post.

Barely a minute later Talbot doubled their lead. Boyle burst through the defence on the left and carried it into the box where he unselfishly slid it across for ROSS TAYLOR to fire it home to make it 2-0.

Largs weren’t ready to give up without a fight and threatened to pull one back in the 67th minute. McLeod got to the bye line and lifted a dangerous cross toward the back post where Lewis saw his effort blocked en route to goal.

Three minutes later Largs passed up a clear chance to reduce the deficit. McLeod managed to wriggle past Boyle at the bye line and angled it back right into the path of Ramsey who fired it over the bar from 6 yards out.

In the 72nd minute Wardrope intercepted a pass inside the Bot half and released Graham Wilson down the left. He raced into the area but fired wide of the right hand post under pressure.

A minute later Taylor whipped a good 1st time ball in from the right that McCreath managed to turn behind for a corner.

Largs had a half chance in the 74th minute. Davidson latched onto a poor clearance and threaded a pass through to Frizzell on the right of the 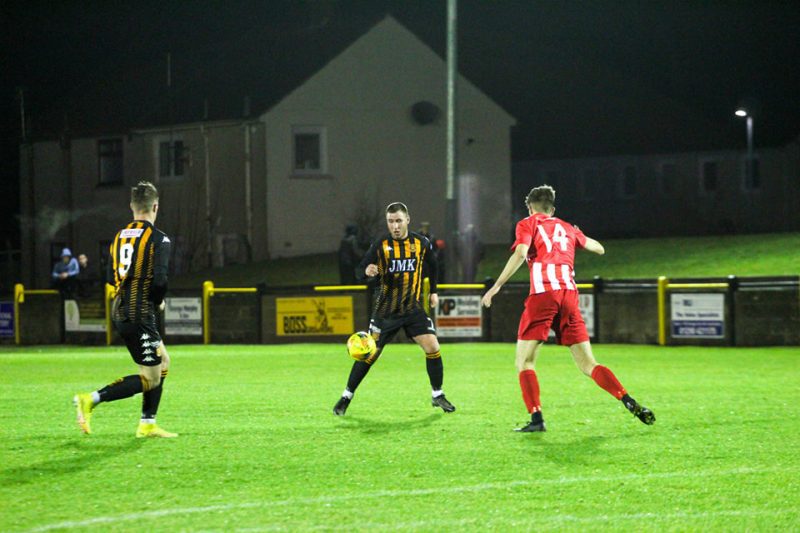 penalty box. He fired it across goal and wide of the right hand post.

With quarter of an hour remaining Talbot made a triple substitution with Shankland, Samson and Smith coming on for Graham Wilson, Mason and Wardrope. Largs also made a further change with Adam replacing Frizzell.

Talbot threatened to extend their lead in the 77th minute. Samson sped clear on the right and pulled it back into the path of Taylor whose low drive looked net bound til blocked by a defender.

Tucker now made another change with Healey making his return from injury – coming on for Taylor.

Six minutes from time Shankland swept the ball from left to right to find Healey who held it up before releasing Stafford on the overlap. His cross was blocked behind for the corner and when it came over McCracken met it to volley over the bar.

A minute later Talbot grabbed a 3rd goal to seal matters. McCreath misjudged a header back to his keeper under pressure and sent it wide of McGowen where KIER SAMSON raced onto it to pass it into the empty net.

Two minutes from time Talbot nearly added a 4th. Stafford hared up the right and fizzed a ball across the face of goal that Samson just failed to convert at the back post.

A minute later Healey cushioned the ball into the path of Boyle who volleyed over. Talbot now made their final change with Ballantyne on for Boyle. 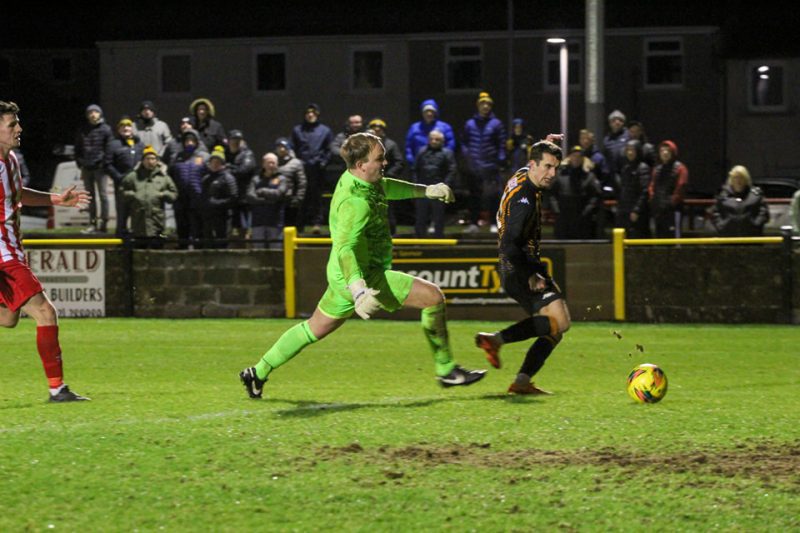 the game moved into added time Talbot had one final opportunity. Ballantyne was wrestled to the deck out wide on the right and Talbot took the free kick short working it to Healey who fired a ball to the far post where Smith was inches from connecting.

A good 3 points for the Bot who return to league action this Saturday when they host Petershill at Beechwood.