Very few Junior fixtures beat the weather & Talbot were left wishing the Arctic conditions had put paid to their visit to Newlandsfield.

Pollok made a sprightly start & almost took the lead within 2 minutes. Monti slid a well-weighted pass through to D Winters inside the area. He knocked it past Leishman, but from a tight angle his shot came back off the outside of the post & Leishman gathered.

Two minutes later Talbot’s defence were exposed by a long ball downfield from Longmuir. It came straight through to D Winters on the right side of the box who controlled it instantly before cutting it back toward Monti whose low drive was held by Leishman. 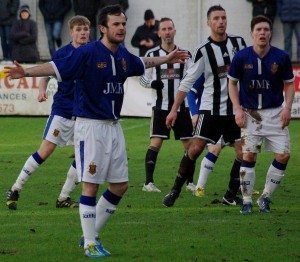 As the cliché goes, the goal was coming, and it arrived in the 5th minute. McAleenan hit the bye line down the left before pulling it back to the corner of the 6-yard box where MONTI guided it inside the right post.
Talbot recovered from their false start & Hyslop had a half chance in the 7th minute. Young flighted a good cross into the centre where Hyslop rose to loop a header back across goal but it flew wide of target.
Pollok threatened to extend their lead after 11 minutes. McGoldrick headed Mackenzie’s cross behind for a corner on the right and when it came over R Winters met it unopposed to head toward goal. His header was on target but appeared to be cleared out the goal mouth off his team mate Monti before coming to Walker whose tame volley was easily saved.
The next effort at goal came a minute later as Young threw himself to meet Latta’s cross but his diving header flew just wide of target.
The game then entered a lull, with both sides competing for every ball all over the park, but neither side remotely threatening.
That changed in the 23rd minute when Young pitched a good ball down the right for Wilson to chase. He was in behind the defence but Longmuir did well to race to the edge of his area to clear.
Talbot had a golden chance to equalise in the 28th minute. Following a good spell of Talbot possession and pressure the Bot won a corner down the right. Young aimed it to the far post where McGoldrick climbed to power a header on target. A defender cleared it off the goal line but only as far as Hyslop who somehow 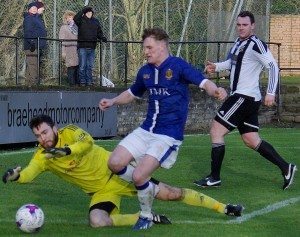 scooped the ball over the bar from 6 yards out.
Once again the game entered a sterile stage with neither keeper being troubled and little to keep the spectators warm.
It wasn’t until the 39th minute that the next noteworthy incident occurred as Talbot again went close to a leveller. Leishman hoisted a free kick deep into the Lok half which eluded the home defence. Shankland ran onto it inside the penalty area and attempted to knock it past the advancing Longmuir. The keeper got a touch to it but the ball looked to be drifting into the net until Hanlon raced back to hook the ball clear on the line.
Milliken then had two chances in quick succession. In the 1st instance he cut across the penalty area before firing wide of goal on his right foot, and then moments later he found himself in space just inside the Lok box but he pulled his left footed effort well wide of target.
It was all Talbot at this stage & Wilson was next to have an effort at goal when Shankland freed him inside the area. He drilled a low shot on target that Longmuir blocked but couldn’t hold before a defender completed the clearance. 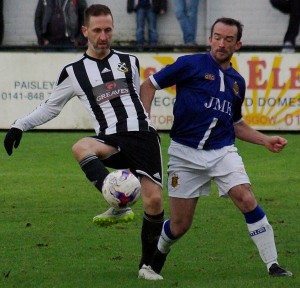 On the stroke of half time Wilson broke down the left & swung a dangerous cross into the centre which Longmuir gathered under the bar and so Pollok made it into the interval 1-0 up.
Talbot started the 2nd half much sharper than they did the 1st and put together their best move of the game in the 47th minute. Latta knocked the ball up to Young who fed it inside to Shankland. He in turn rolled it into the path of Hyslop who was up ended by Williamson just outside the box, resulting in a booking for the Lok man & a Bot free kick. Unfortunately, Shankland couldn’t make anything of the opportunity & fired the set piece into the wall. It came out to Wilson on the right but his cross swung beyond everyone at the far post and behind for the goal kick.
White looked unfortunate to be penalised in the 50th minute when he won the ball in the air, only for the referee to award Pollok a free kick. Hanlon curled it in from the left right onto the head of Gallagher who glanced a header wide of the right post.
Down the other end Talbot came close in the 55th minute. Young pounced on a loose ball midway inside the Lok half before feeding it out to Shankland on the left. He released Milliken on the overlap & he fizzed a ball right across the face of goal that beat Longmuir but had no one to turn it in and flew behind for a goal kick.
Pollok made their 1st change in the 61st minute when Frye replaced McAlennan in midfield.
The home side had a great chance to kill the game off in the 68th minute. Mackenzie switched the ball out right to find Monti running clean through but Leishman raced off his line to narrow the angle and make the block.
A minute later Boyd had a pop at goal from 25 yards but his shot swerved away wide of the right post.
Pollok now made a further change with McLennan on for R Winters.
With quarter of an hour remaining Tucker made a double switch with Shankland & Milliken making way for S Wilson & Love.
The final stages were a bit of a damp squib with Lok content to run the clock down & Talbot unable to carve out any clear chances.
In the 82nd minute Higgins replaced Monti and the sub’s only telling contribution was to pick up a booking 4 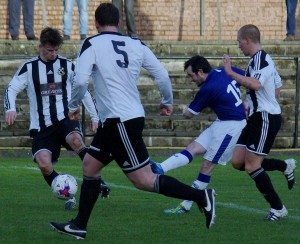 minutes later when he marred a good run into the box with a feeble dive looking for a penalty.
With 2 mins remaining on the clock Talbot had their last chance to salvage a share of the spoils when they won a free kick deep in the Lok half. Young delivered it into the danger area where McGoldrick’s header on target was held by Longmuir.
This wasn’t Talbot’s day & we paid the price for a sluggish start & failing to convert a couple of good chances to level before the break. Still, it could have been worse and luckily, results elsewhere went our way so little has changed at the top of the table in what is turning out to be the most open league title in years. Next up for Talbot is a local derby when title rivals Glenafton visit Beechwood.