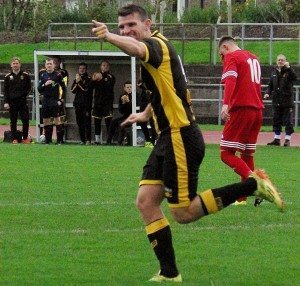 Talbot followed up last week’s impressive display with another fine showing, as they swept past Greenock 4-0 at a rain lashed Ravenscraig stadium.
The home side didn’t stand on ceremony, playing very direct football which almost paid off in the 5th minute. Munro found himself in space on the left of the area and hit the target but Leishman fell to his left to smother his effort. Talbot then went straight down the other end where Milliken bundled the ball home from Wilson’s cross but he’d moved too early & it was chalked off for offside.
Greenock came close to taking the lead in the 9th minute. White headed Munro’s cross out the box where it came to McGarrigle who ran onto it & fired a shot just wide of the left post.
Leishman was called into action in the 14th minute when Grana slid a dangerous ball across the face of goal toward Munro at the far post but Andy cut it out in the centre.
Talbot grabbed the opening goal in the 25th minute and never really looked in any trouble once they’d edged ahead. It came from a free kick out on the right which Young whipped into the centre where MCGOLDRICK thumped a header into the back of the net.
Six minutes later Talbot doubled their lead. Milliken won a corner out on the left and YOUNG repeated his feat from last year’s Hurlford semi-final; scoring direct from the corner kick.
It was all Talbot and the next chance came in the 33rd minute. Milliken cut the ball back across the face of goal where Wilson met it but it came at him too quickly for him to steady himself and hit off him and over the bar.
Talbot’s next effort at goal came about as a result of good work down the left by Milliken. He raced clear before cutting the ball to Young at the edge of the area and his shot flew just over the bar with McWilliams beaten.
Milliken ought to have put Talbot three ahead in the 42nd minute. Scott was short with a header back & Milliken raced onto it and it took it round the keeper but with the goal gaping he blasted it into the side-netting.
He made amends a minute later when he out-paced Doherty down the right and squared the ball to the unmarked WILSON who stroked it home to send Talbot in 3-0 ahead at the interval.
Both sides emerged unchanged for the 2nd half and Talbot continued where they’d left off; pushing forward to add to their tally.
The 1st meaningful attack of the half saw Young latch onto Leishman’s long clearance and hit a great early ball into the centre where Wilson was caught on his heels allowing Scott to clear.
Greenock weren’t at the races and it was no surprise when they made a change after 54 minutes, with McNeil replacing McBryde. 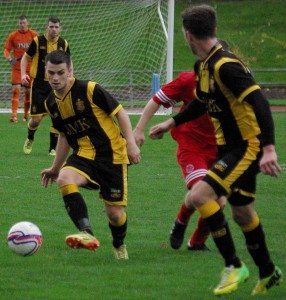 Cochrane almost extended Talbot’s lead in the 56th minute. Greenock’s defence managed to clear out a corner but Latta helped the ball back into the box where it fell at the feet of Cochrane. He attempted to pass it into the bottom corner but McWilliams produced a top save, diving to his left to tip it wide.
Three minutes later Cochrane again hit the target. McGoldrick went on a mazy run up the left wing and swung a cross into the centre which Cochrane glanced on goal but it lacked the power to beat the keeper.
Talbot made their 1st change in the 62nd minute when Love replaced Milliken up front.
Greenock hadn’t made any impression in the 2nd period but were given a good chance to test Leishman in the 63rd minute when awarded a free kick just outside the penalty box for a foul by White. Begley laid it off for McNeill to hit but he struck his low shot straight into the wall.
Soon after both sides made further changes, firstly Greenock brought Patton on for Docherty and then Tucker brought on Shankland in place of G Wilson.
McWilliams was tested in the 69th minute when Hyslop threaded a ball through the right to find Love inside the area. He hit it early and McWilliams saved to his left. 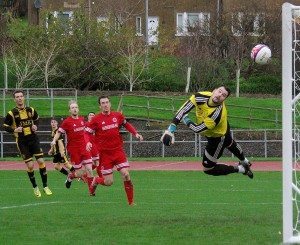 The keeper was being kept busy and made a crucial interception minutes later. Boyd’s pass sent Hyslop clear on the right and he fizzed a cross across the goal mouth which McWilliams cut out before it reached Love who was waiting for a tap in.
Talbot completed the scoring in the 75th minute. Boyd slid a perfectly weighted pass through to Latta and he knocked it across the face of goal where LOVE turned it home.
Tucker now made his final change with S Wilson coming on for Young and Greenock also made their last change with Lyden replacing Scott.
The sub was involved straight away as Wilson lifted the ball over the defence to send Love free on the left. He angled a shot toward the far post that had McWilliams beaten but Begley got there in the nick of time to clear off the line.
Love had another effort at goal in the 80th minute. He turned smartly out on the right and powered a shot just over the crossbar.
Greenock had an opportunity for a consolation effort in the 83rd minute. Brown saw his shot blocked back to him and he laid it back to Murray whose effort was deflected behind.
With 5 minutes remaining Doherty conceded a free kick out on the right for a foul on Shankland. He curled the free kick into the centre where it was headed clear, but only out as far as Latta who hammered a shot on goal that the keeper did well to parry.
A minute later the Bot had another chance from a set piece after Wilson was fouled just outside the penalty box. Shankland lifted it over the wall but it didn’t dip quickly enough and sailed over the bar.
In the final minute Talbot had one final chance to add to their lead. Shankland’s low drive from the right side of the area beat McWilliams only for Lyden to stretch out a leg to clear off the line. It came back to Shankland who opted to square it for Latta who sent his shot past the post.
Talbot won this cup tie convincingly and might have won by a wider margin. Next week Talbot are again on cup duty, as they travel through to Perth to face Kinnoull in the Scottish.