Talbot edged this derby encounter at Townhead winning an average game with a wonder goal to notch their first win of the season.
The first opportunity came Cumnock’s way after 4 minutes when McCracken was caught on the ball just outside the penalty area. McKenzie surged into the box but failed to make the most of the opening.
A minute later Talbot had their first chance when Kemp cut in off the left wing & fired a low drive wide of Johnson’s left post.
McKenzie squandered a great chance to put the home side ahead in the 10th minute. Cumnock had a slice of luck when White’s attempted clearance was blocked & spun straight into the path of McKenzie as he bore down on goal but Leishman came off his line & dived at his feet to make the block.
Cumnock wasted another clear opening in the 17th minute. They won a corner out on the right when Esplin’s shot from the edge of the area was deflected behind off White. When the corner came into the near post Anson was in space but glanced a free header well wide of target.
Talbot’s next attack saw Muir bundle Pooler over just outside the box resulting in a Bot free kick. Kemp lifted it over the wall & on target & Johnson just managed to punch it clear under pressure from McIlroy. Cumnock couldn’t clear their lines & when Pooler headed the ball down onto the 18 yard line FAULDS met it to lash an unstoppable effort into the top corner to put Talbot 1-0 ahead after 19 mins.
Crawford became the 1st name in the notebook when he was penalised for a late challenge on Thomson in the 25th minute.
The Talbot defence had a lucky escape in the 27th minute. Murray launched a long throw into the penalty area which the defence failed to deal with. It broke straight at the feet of Muir who missed the target from 15 yards.
Thomson had his name taken soon after for catching Samson late.
Half an hour in Talbot threatened to double their lead when a ball over the static defence found Pooler running in behind. He looked to be in but Johnson raced outside his box to make a crucial tackle & slide it out for a shy.
In the closing stages of the half McKenzie wasted two chances in quick succession to draw Cumnock level. Firstly, Muir swung a dangerous cross in from the left that he failed to connect with at the back post and then a minute later a header through the centre sent him through on goal but he lifted his shot over the bar.
Cumnock started the 2nd half on the front foot & came close to equalising in the 50th minute. McCracken headed Muir’s cross clear but it only came out as far as Montgomerie whose half volley just cleared the bar with Leishman stranded off his line.
Tucker was forced into a change in the 54th minute when Samson cynically took out Faulds in the centre. Samson received a yellow card for the challenge & Faulds had to limp from the field to be replaced by Pope. This led to a re-shuffle with Lyle moving to right-back & Armstrong into midfield.
Talbot had a chance in the 57th minute when McIlroy intercepted the ball midway inside the Nock half. He sent an early ball out right to find Pooler inside the penalty area but he was stretching to reach it & his low drive was saved by Johnson.
Cumnock’s Murray picked up a knock in the 65th minute & unable to continue he was replaced by Woods.
Two minutes later Montgomerie was fortunate to escape a caution when he rashly went in with studs showing.
In the 69th minute both sides made a further change with Forsyth coming on for Muir for the home side & Glasgow replacing Pooler for Talbot.
With quarter of an hour remaining Talbot made their final change with Shankland on for Kemp.
In the closing stages the home side huffed & puffed to break Talbot down without any joy & Talbot were able to close the game out & hold on for the 1-0 win.
A below par performance from Talbot but any win over Cumnock is a welcome one & Talbot now continue their Ardagh group stages with a visit to Rosebank on Wednesday night to face Lugar Boswell. 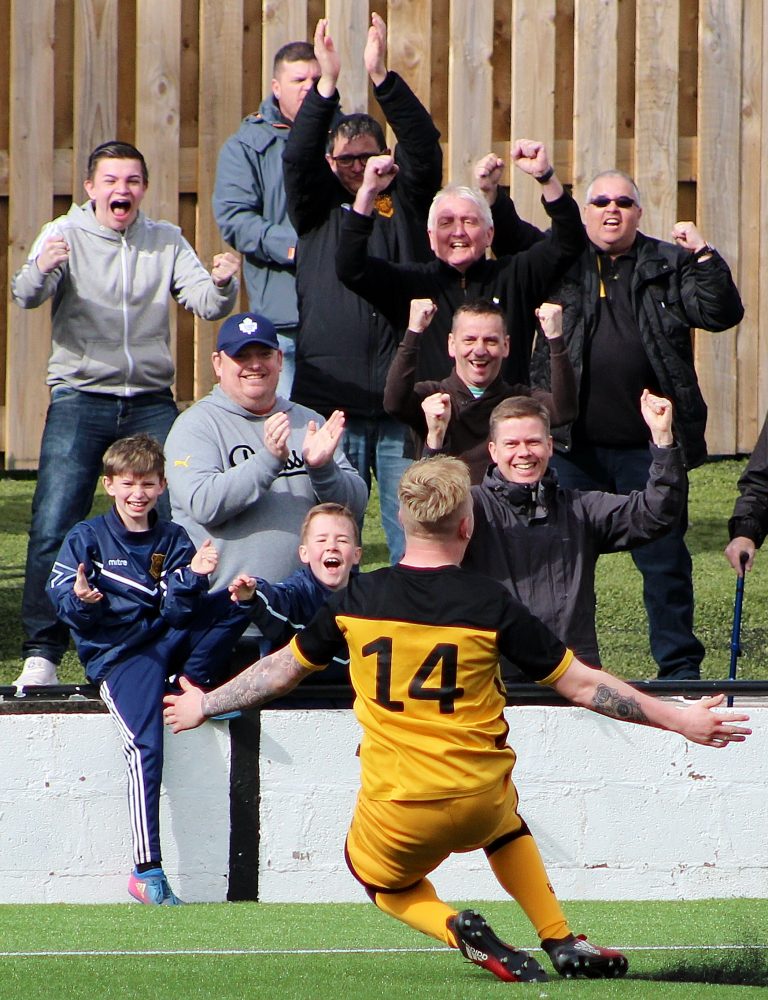 Under sunny April skies Talbot leapfrogged Glenafton to climb to the top of the table thanks to a hard fought derby win at Townhead.

The game was a bit of a contradiction, Schrondinger’s match, which simultaneously had very few chances or shots on goal but plenty of incident & talking points.
Talbot started brightly & won a free kick just wide of the penalty area within 2 minutes when Crawford tripped Graham Wilson. Pope whipped a dangerous ball over to the far post but no Bot player read it, and it sailed wide for a goal kick.

The Bot’s next attack saw Graham Wilson cushion Lyle’s cross back toward Latta who was just beaten to the loose ball.
Anson was causing the Talbot defence problems in the air but Cumnock weren’t able to capitalise on any on his head flicks. Anson had the ball in the back of the net after 15 minutes, but only after clearly shoving McGoldrick over & the linesman’s flag was up long before he knocked the ball past Leishman.
Neither keeper was being over-worked. Watt lashed a half volley miles over from the edge of the box following a corner & down the other end Young lobbed a ball across the face of goal which Milliken met at full stretch to direct on target but it lacked power & Johnson held comfortably.

Talbot should have taken the lead in the 24th minute. Pope’s perfectly weighted pass found Latta free on the left & he cut it back into the centre where Graham Wilson ran onto it but sclaffed his shot off target.
Cumnock won a set piece in a dangerous area when Esplin crumpled under an aerial challenge just outside the box. Watt tamely hit it into the wall but got a 2nd bite at the cherry when it came straight back to him & this time his low drive was deflected wide.
Hunter was cautioned in the 27th minute for a late challenge on Steven Wilson.

Cumnock were seeing most of the ball without doing any damage and Talbot weren’t having any joy at the other end.
The Bot did have a half chance in the 40th minute. Milliken swept a cross over from the left that Latta retrieved on the opposite wing. He slid it inside to send Lyle bursting into the area & his cross come shot flew wide of target.

The home side should’ve been a man light in the 42nd minute when Lundie floored Steven Wilson with a poor challenge but the referee only showed a yellow card. Both Graham Wilson & Esplin were cautioned as a result of the fracas following the tackle.
Cumnock were gifted a chance in the last minute of the half. Harvey’s slack pass out of defence was intercepted & ended with Burns who drilled a low shot just wide of the left post from 20 yards.
The home side ought to have moved ahead shortly after the break. Anson’s head flick found Montgomery racing clear through the centre. He strolled through on goal but tamely passed the ball straight at Leishman.
The referee reached for his cards again in the 49th minute. Anson dived inside the area sparking an angry exchange which ended with Anson & Pope being cautioned.
Burns should’ve joined them in the book two minutes later when he flattened Steven Wilson in an aerial challenge but the ref let him off the hook.

Anson was unfortunate in the 53rd minute. Montgomery centred the ball to find him in space 30 yards from goal & his shot flew just wide of the right hand upright.
The cautions kept coming & Wood received a yellow card in the 61st minute for a trip on Young.
Cumnock were the 1st to make a change; bringing on Samson for Watt.
Johnson had spent most of the 2nd half spectating but he was called upon in the 70th minute. Graham Wilson knocked the ball down to Milliken who squared it across to White on the 18 yard line. He drove a powerful shot on target but it flew straight at Johnson.
The referee’s notebook claimed another name when Harvey was booked in the 71st minute for a foul on Samson. A minute later, Tucker made a change with Shankland on for White.
Shankland was only on the park two minutes when he was harshly booked for a shove on Anson.
McGoldrick came to Talbot’s rescue in the 75th minute. Samson’s pass would have sent Burns through on goal had McGoldrick not stretched out a leg to intercept it.
Tucker made a further change in the 82nd minute when Thomson replaced Young.
The referee had a big decision to make in the 84th minute. Harvey was short with a pass back to Leishman & Anson tried to chase it down. He went over inside the area claiming Harvey had impeded him but the ref dismissed his penalty appeal.
The game was finally settled two minutes from time thanks to a strike worthy of winning any game. Wood sent Steven Wilson to the deck as he surged forward & the ref produced a 2nd yellow for the full-back who made the hardest walk; all the way back to the clubhouse.
SHANKLAND took the free kick & Johnson never saw it coming as Shanks curled a peach of a shot over the wall & away to the static keeper’s right to make it 1-0.
Not a classic by any stretch of the imagination but it’s always nice to get one over on Cumnock & the 3 points gained sees Talbot move above Glenafton who crashed to an unexpected defeat at Largs.
Next up for Talbot it is back to cup duty as they head south to face Maybole in the West. Talbot fans travelling to the game should be aware that it is an earlier 1.30 pm kick off.Cumnock – Johnson, Wood, Crawford, Lundie, McKenna, Hunter, Montgomery, Esplin, Anson, Burns, Watt