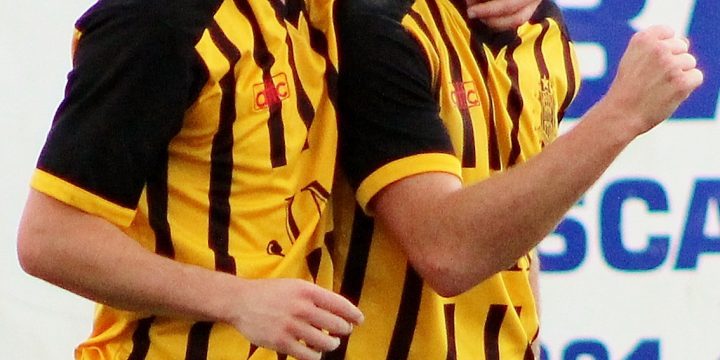 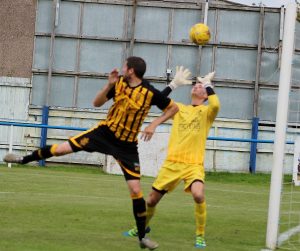 From the near post, as the ball gets whipped in, Gordon Pope instinctively heads the ball backwards over the ‘Lie ‘keeper and into the back of the net. 0-1. 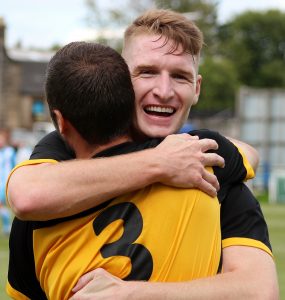 Its all ‘Cheshire cat grins’, as Danny Boyle congratulates Pope.

Never a classic, but Talbot fought their way to a very impressive away win at Dunterlie Park, starting the league campaign with a 4-0 win over Arthurlie.
As often happens at Barrhead the game was fiercely competitive and the opening spell passed in a blur of challenges and heady tennis.
There was little goal mouth action; however Talbot converted their first real chance to take the lead in the 13th minute. Palmer conceded a free kick when he shoved Hyslop out on the touchline. Young whipped a good ball in which Wilson headed for goal. Hay produced a brilliant save to tip his header onto the bar but Latta reacted sharply to steer it across goal where POPE headed home from close range.
Talbot’s defence were playing well & Arthurlie were being afforded few opportunities to test Leishman. The Bot keeper was tested by Palmer’s hanging cross and got a hand to it but failed to clear & it came to McGregor on the right whose low ball into the centre was cleared.
Leyden had his name taken in the 27th minute for a late tackle on Milliken.
Talbot doubled their lead on the half hour mark. Pope flighted a ball down the centre over the defence. Wilson ran onto it inside the box, controlling it with his 1st touch but before he could hit it, MORRISON stretched out a leg to lift the ball over his own keeper to make it 2-0 to Talbot.
Arthurlie should have been two goals down & a man down in the 33rd minute. Leyden led with his elbow in an aerial challenge on Hyslop right in front of the referee who bottled the decision.
The onus was on the home side to press to reduce the deficit but it was Talbot who finished the half the stronger without managing to add to their tally and Talbot went in at the interval with a two goal cushion.
Arthurlie made a change at the interval with Smith coming on for Gribben & this seemed to lift the home side who made the early running.
They could have halved Talbot’s lead within a minute of the re-start. Leishman came to punch McGregor’s cross clear but only succeeded in knocking it straight out to Deas & his shot from 15 yards looked destined for the back of the bet but Leishman redeemed himself with a fantastic stop to his right.
Leishman was tested again in the 51st min when he came off his line to gather a cross into the centre & spilled it in a scrum of bodies but fortunately the ball was swept clear.
A minute later Talbot had a lucky escape. Deas met McGregor’s low cross into the centre & although he sclaffed his shot at goal, Smith managed to flick it on & the ball rolled just wide of the left post.
Talbot’s sluggish start to the 2nd half ended in the 54th minute when Hyslop latched onto a weak headed clearance just outside the area. He controlled it on his chest & fired a low shot on target that Hay saved low to his left.
Carroll missed a chance to pull Arthurlie back into it just shy of the hour mark. Leishman failed to claim a corner from the left & when McGregor headed it toward goal Carroll spun it on 6 yards out but fired the ball over the bar.
A third goal would’ve killed it & nearly arrived in the 63rd minute. Young forced a corner on the right & when Milliken delivered it into the centre Pope ran across his marker but glanced a header across goal & wide of the right post.
When the 3rd goal did finally arrive it was a classic, worthy of sealing any game, and an early contender for goal of the season. Milliken started the move playing it out wide left to Pope just inside the Lie half. He played it inside into the feet of Young who cleverly back-heeled the ball into the path of MILLIKEN who coolly placed it inside Hay’s right post from 20 yards.
Arthurlie made a change in the 72nd minute with Nimmo making way for Convery & Talbot soon made their 1st switch with the tiring Wilson being replaced by Stevenson.
The game was effectively over as a contest but Arthurlie had a chance to pull a goal back in the 78th minute. Deas won a free kick out on the right touchline & he whipped the ball across the face of goal and beyond the far post. McGregor gathered out on the left wing & cut it back to the edge of the area where Smith ran onto it but sliced his shot wide of the left post.
Stevenson had a great chance to open his Talbot account in the 84th minute. Leishman’s ball down the centre found Milliken racing onto it. Hay came out his box to stop the danger & Milliken tried to flick the ball past the Lie keeper. Hay succeeded in blocking it but the ball spun left to Stevenson. With the keeper stranded he could have carried on down the left into the area & tried to place it home but instead went for the early effort & sent it wide of the unguarded net.
Tucker made a double substitution in the 86th minute with Pooler & Thomson coming on in place of Young & Milliken.
Talbot completed the scoring in injury time. Boyle powered a header straight the centre towards POOLER at the edge of the area. He turned his marker & kept a cool head to slot the ball past Hay into the corner of the net.
A great start to Talbot’s league campaign and a good confidence booster ahead of a tough double header against Beith. 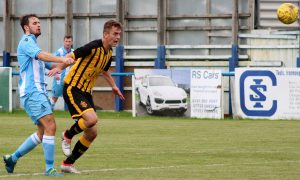 Stevie Wilson races into the box with the ball, however, the defender lashes out at the ball too hard and sends the ball flying over his own ‘keeper and into the back of the net. Own goal! 0-2. 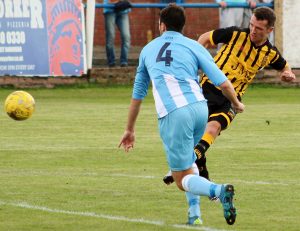 Milliken finishes off a great passing move by Talbot and smashes the ball home from outside the box. 0-3. 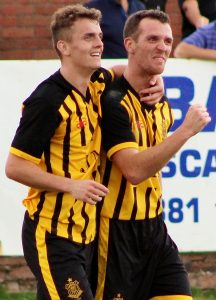 Stevie congratulates Keir, as he shows what it means to score for the Talbot! 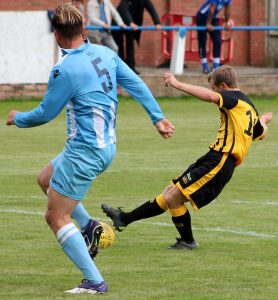 Dylan Pooler rounds off the scoring at the ‘death’ for Talbot, as he slots the ball into the back of the net from inside the box. 0-4. 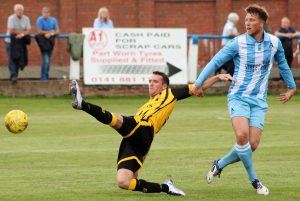 As the ball gets headed back to the ‘keeper, ‘Mulky’ tries his best to sneak in and get a foot to the ball. Oh so close! 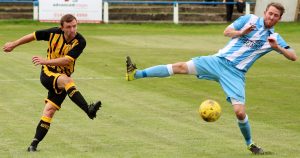 With Talbot on the ‘front foot’, Latta fires in a low cross into the Arthurlie box.[/caption[caption id="attachment_2964" align="alignleft" width="300"]

All eyes on the ball, as ‘Butch’ sends the ball forward from the touchline. 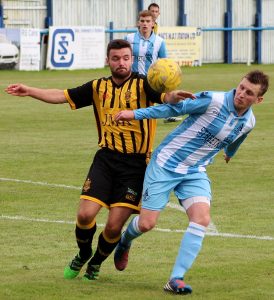 With the ball bouncing about inside the ‘Lie box, Dylan Stevenson tries to win it back for the boys in black and gold. 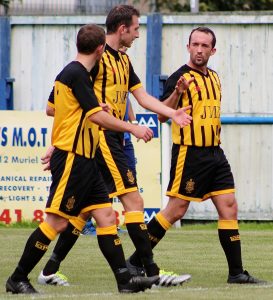 White, Hyslop and Latta discuss the past 45 minutes of play, as they head off for half-time. 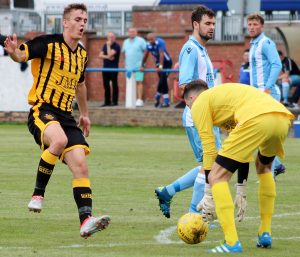 As he chases the ball down, Stevie Wilson just gets pipped to it by the Arthurlie ‘keeper. 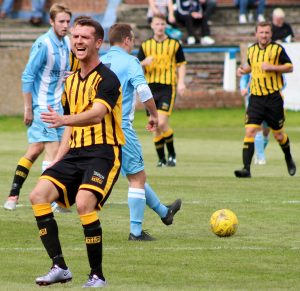 Keir Milliken shows his frustration, as the pass he was waiting on gets intercepted. 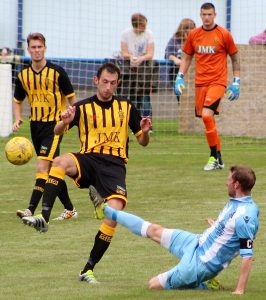 Hyslop loses possession, as the ‘Lie captain lunges into the tackle and wins the ball. 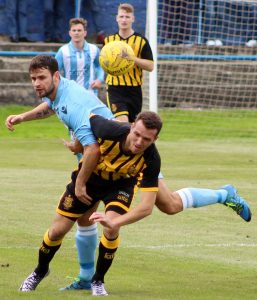 Another battle for possession ensues. 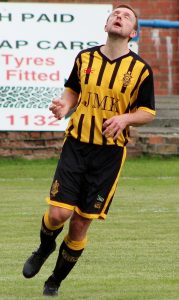 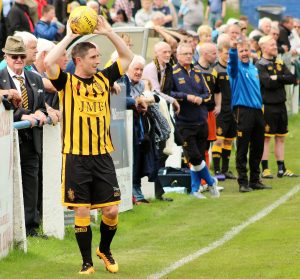 ‘Tucker’ roars out the orders, as Lyle tries to get the Talbot engine going again. 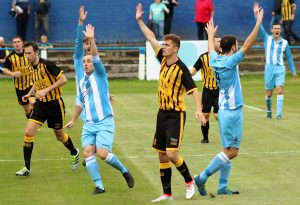