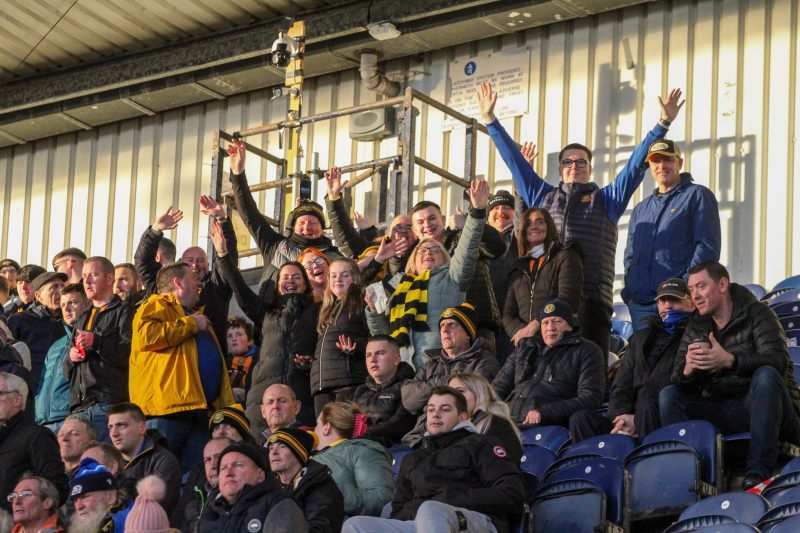 Talbot bowed out of the senior cup, beaten but not disgraced, after three 2nd half goals saw Raith Rovers through to the 4th round.

On an afternoon when Talbot were set up to contain the Bot didn’t have many chances although they did have the first effort at goal after 6 minutes. Boylan pounced on a slip from a Raith defender and went for goal from 20 odd yards forcing a save from McDonald low to his left.

Two minutes later Raith threatened down the left when the ball was worked to Ngwenya whose low ball across the face was well cut out by Armstrong.

In the 10th minute Stanton had a half chance for the home side from outside the area but he dragged his left foot shot well wide of target.

Raith were seeing a lot of the ball but not producing very much in the final third. In the 18th minute a ball up the left found Connolly in space and when he crossed into the centre Stafford had to head it behind. When the corner came over Nolan got his head on it but glanced it wide of the left post.

The first card of the afternoon came in the 31st minute for Raith’s Brown for a late challenge in midfield.

A minute later Easton whipped a dangerous cross over from the right toward the back post that the Bot defence put behind for the corner.

Raith’s next attack saw Ngwenya drill a low ball in from the left which Aiden Wilson cleared at the near post, taking a knock as he did so for a free kick to Talbot.

The Bot then won a free kick down the other end wide on the left. Wardrope swung it into the penalty area where McCracken got his head on it but flashed a header well wide from 15 yards. 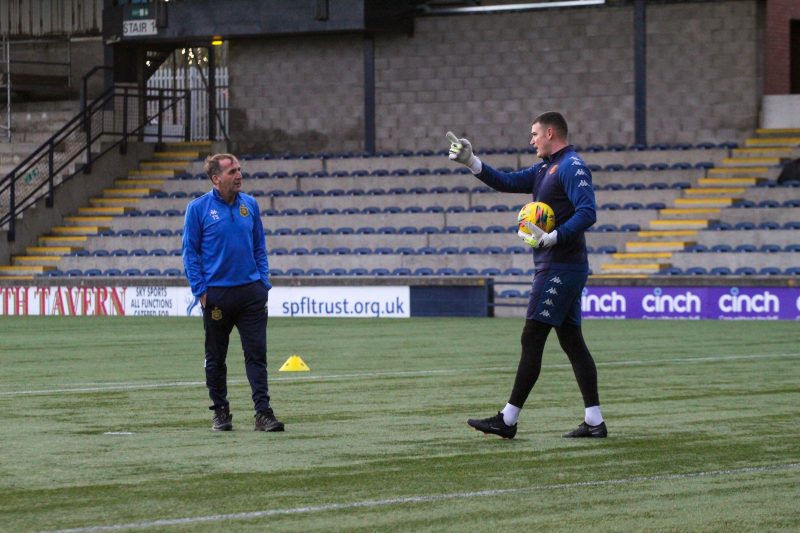 From then on til the half time whistle Raith huffed & puffed to no great effect and the sides went in level at the break with Leishman yet to make a save.

The home side came out fired up at the start of the 2nd half and in the 48th minute a Raith player let fly from 25 yards and his shot took a slight deflection as it flew just over the bar.

Talbot made their first change in the 49th minute when the injured Boylan made way for Mason.

In the 50th minute Wardrope won Talbot a corner out on the left when his cross was blocked. He took the corner and whipped a good low ball into the near post where Ngwenya dived to head it clear.

Three minutes later Mason met a shy from the left and flicked it inside to find Wardrope just outside the penalty area but he slipped as he went to hit it and it flew well wide of target.

Raith made their first change in the 56th minute with Connell on in place of Easton.

On the hour mark a ball slid through on the left found Connolly running in space out wide. He played it across the face of goal but there were no takers and Leishman was able to gather.

The breakthrough came in the 63rd minute. Connolly lifted a ball down the right to find the run of Brown and when he cut the ball back to CONNOLLY he cut inside onto his left foot and curled a peach of a shot for the far corner. Leishman managed to get his fingertips to it but couldn’t prevent it flying into the net.

Talbot now made a 2nd change with Shankland coming on for Graham Wilson.

Raith came close to grabbing the 2nd in the 67th minute. Millen swung over a dangerous cross from the right that flew off a defender’s head and clipped the top of the crossbar.

Two minutes later Brown tried his luck from distance but Leishman saw it all the way and made the stop.

Talbot then won a free kick out wide on the right after Taylor was caught. Wardrope lifted it into the edge of the box trying to find Armstrong but he was just beaten to it and the ball cleared.

It was game all but over in the 73rd minute when Raith doubled their lead. A low ball across the box broke into the path of CONNOLLY and his strike left Leishman wrong footed as it deflected off Boyle.

With 13 minutes remaining Tucker made a double switch with Park & Armstrong making way for Crawford & Ballantyne.

In the 81st minute Taylor received Talbot’s only caution of the afternoon.

Raith made their final change in the 84th minute with Coulson replacing Vaughan.

Five minutes from time Talbot had a brief glimpse at goal. A free kick was flighted down the centre and fell to Ballantyne 22 yards out in space. He could have shot but worked it out wide left and the move fizzled out.

The scoring was completed a minute later when Raith grabbed their third. A pass back was hit a little too wide for Leishman to gather out on the bye line. He was beaten to it and Raith calmly worked the ball across to CONNOLLY who passed it inside the left hand post to complete his hat-trick.

In the final minute Shankland cut in off the left and swung a cross into the goal mouth that McDonald gathered and soon after the ref blew up for full-time.

No one could fault Talbot for effort – the team gave their all – but came up short against a full-time side 4 tiers above us. Next up for Talbot it’s the short trip to Cumnock where they face their fierce rivals in the Scottish Junior cup.