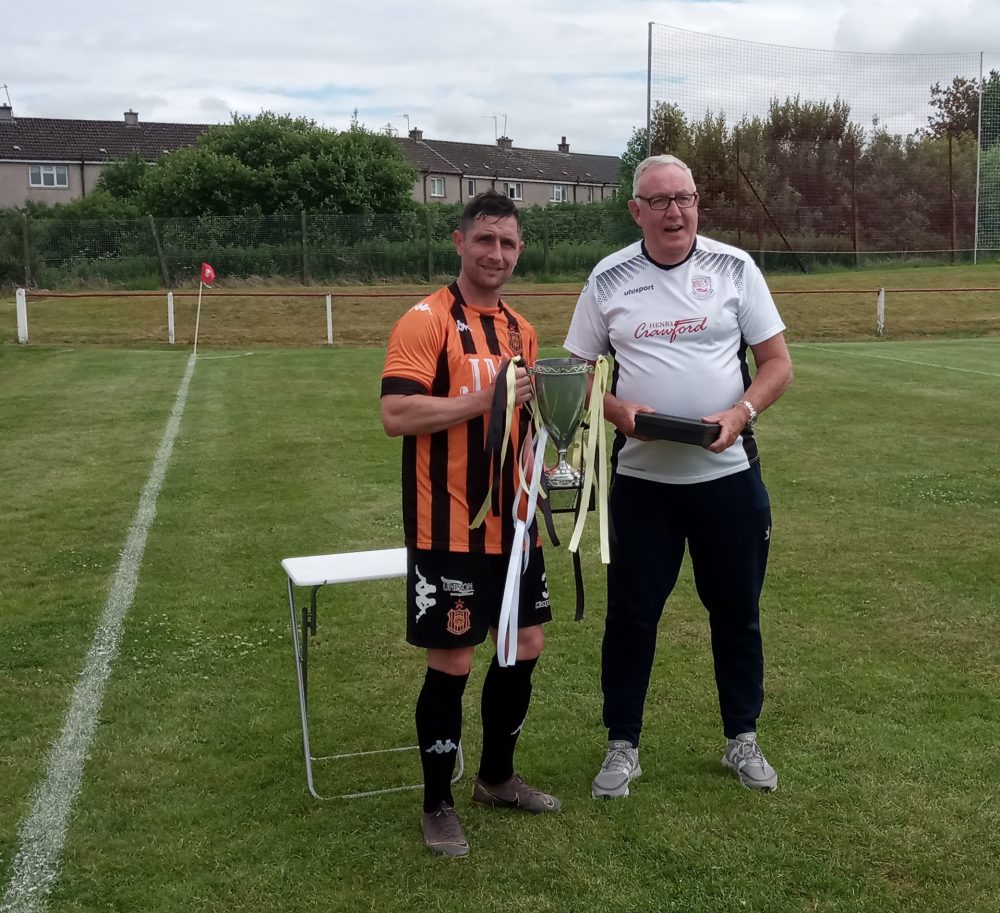 on Saturday. It was a match that saw both keepers being void of any saves to make as both sides nulified each other which resulted in a poor game overall.

Playing down the slope Neilston were the quickest out the traps forcing three corners in the opening five minutes, but these were well dealt with by the Talbot defence, On 8 minutes Talbot won their first corner which was cleared into the path of Bain but his speculative shot was well past the goals.

Neilston were dealt a blow on 16 minutes when their experienced defender Doyle had to go off with an injury he had picked up after a tussle with Samson, and was replaced by Haggerty who had just featured in the Development match an hour earlier. Two minutes later the first clear cut chance fell to the home side when a cross into the box by Bulger was missed by the Talbot defence but although managing to fashion an opening Jones miss hit his effort and it trundled into the hands of Leishman,

Neilston keeper Digney took a sore one on 27 minutes when he collided with McDowall as both players had an eye on the ball when Shanland whipped in a superb cross. A minute later Talbot looked to have taken the lead when Craig McCracken headed a Shankland corner off the underside of the bar where it looked to be well over the line before being cleared by Halliday. With no official linesmen in place the referee waved play on.

The game decended into a door midfield battle after this with both sides defending well, but failing to create many chances. The last real bit of action was when Shankland again found the head of McCracken but his diving headed went a couple of feet past the post.

At the start of the second half Talbot replaced Healy, Pearson, Boyd, Samson and McDowall with Robbie McCracken, White, Glasgow, Boylan and Armstrong. While the home side swapped McLaughlan with Fletcher.

The second half was hardly started when the first talking point emereged when McPherson and Brophy both went for a loose ball which resulted in the Talbot man picking up a yellow card as the Neilston player went through a series of rolls and screams, before playing on minutes later, much to the disgust of the travelling support.

Ten minutes into the second half Boylan cut down the right wing before sending in a delightful ball which was missed by a couple of Talbot players who actually got in each others way. Willie Lyle was next in the book when he swept the feet from Haddow as the player tried to set up an attack. Things were now getting fiesty with R. McCracken and Stirling squaring up to each other, and minutes later the Talbot youngster was in the book after fouling Loughlin.

Shortly after Boylan and Bain split the home defence with a break down the right wing but when the cross came over White was unable to stear his header toward the target. The breathrough came in the 72 minutes thanks to some neat play by Boylan where he picked the ball up in the box before smashing it past the keeper and a number of players.

This was to be the last real action of any note as Talbot weathered a late Neilston comeback where tension again rose with Brophy going into the book for mouthing after Fletcher had the ball in the net but he was well offside.