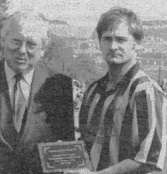 Talbot’s pre-season schedule kicks off on the 13th of this month with a visit to Neilston Juniors to take part in the Hugh Blair Trophy. It’s been a number of years since Talbot last visited the Brig O’ Lea Stadium and no doubt a fair number of supporters will be in attendance to have a look at the clubs new signings.

On the 17th Talbot visit Irvine Victoria with a 7pm kick off.

Saturday the 20th Talbot again travel, this time to Newtongrange Star to celebrate the midlothiam club’s 25th anniversary of the opening of their New Victoria Park in 1994. Back then Talbot provided the opposition for the gala day opening where we went down 2-0.