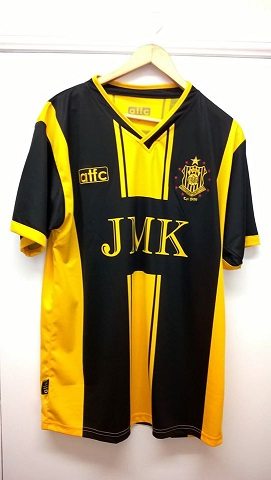 HALL OF FAME 2017
Voting for this year’s Hall of Fame is now taking place. Voting papers can be obtained from Colin Chisholm, John Holroyd, Colin Mitchell or in the Supporters Social Club where a box is also available for completed papers. Voting can also be done on-line on the Talbot Forum. Voting papers will also be available at the turnstiles for this week’s game against Pollok F.C.

Danny Boyle has been placed on the open to transfer list at his own request.

Rosemary and Hugh kindly donated a bottle of Talbot Whisky (see attached photos) to Auchinleck Talbot FC to enable us to raise funds in memory of Sam McCulloch for Alzheimer’s Scotland. This will take the format of a raffle with tickets being sold from behind the bar in the Talbot Social Club costing £1 each, and will run till the end of March. All proceeds will go to Sam’s Family to donate to this cause.

2001 – Glenburn 1 v 3 Auchinleck Talbot. Talbot’s performance today wasn’t quiet the high class performance that we have became accustomed to their laid back attitude became quiet frustrating at times against a 10 man Glenburn team who seemed up for a challenge  but even in an off day these lads still managed to pull off a victory and see us gaining another 3 points. Goals came from Jamie Conn, Taylor Kerr and Lewis Hood. Man of the match Lewis Bell.

2003 – Troon 4-1 Talbot. The boys fought hard and for long spells outplayed the league leaders. Troon used their height though and scored from three corners. Gavin Withers scored a penalty only to be told to retake it and the keeper then saved it which was a harsh descision and had a big impact on the score at that time and ultimately the game. Josh Jones scored his 17th goal of the season with an assist from Zak smith. Man of the match was captain Gavin withers, but Brad “the hitman” Harte and Logan Murray deserve special mentions for the way they played. The boys are home to hurlford on Saturday

2006 – Boswell and Tigers were on home duty this week against Bellfield. Both our teams played very impressive football at times which was really good to watch. Some good well worked goals were scored and great to see the boys playing as a team with smiles on their faces. Positive signs throughout our teams that we are progressing well now and hopefully we can keep up the good momentum we have enjoyed lately. Bit of work to be done on throw ins and playing out from the back but all in all a big improvement over the winter months by all the boys.

2007 – The boys played at home against Valspar on Saturday morning in what was an excellent, we’ll contested game. There was some good football on show from both sides. Talbot played some great attacking football and there was some solid defending and goalkeeping once again. The passing needs to be quicker at times though. Some nice goals scored and the woodwork was hit four times aswell. Special mention goes to Calum Auld for passing and shooting.

2009 – Both teams enjoyed their games today with some much improved play on show. Nice to see some of the things we worked on at training coming through in the games with goals coming from this . Special mentions to Finlay Ralphs for some nicely hit long range goals and good work ethic all round and Daryll underwood for his hard work in the middle of the pitch and good combination play with his teammates. Well done boys.