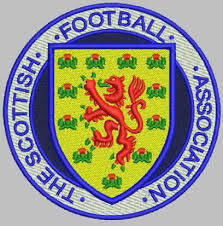 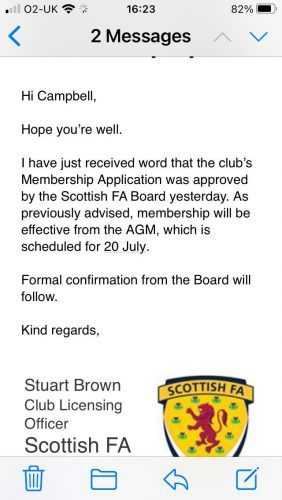 After a lot of blood sweat and tears by the club we have been awarded our Scottish Football Association membership which will come into effect on the 20th July after the association AGM. Our membership means that we are eligible for promotion in the Scottish tier system as well as having instant entry into the Scottish Cup.

The club along with the Beechwood Regeneration Committee and independent volunteers  worked hard to upgrade our beloved Beechwood Park, but let’s not forget  a lot of the work needed to gain our license was done behind the scenes. Thanks to the sterling work by Campbell Peden and his hard working colleagues the final acts needed to put the club into the association were finalised only a few months ago.

It seems strange that when the death knell was ringing for the Juniors, Talbot were one of the remaining club’s who were vocal about the change and still wanted to be part of the SJFA. With the wind of change blowing fiercely throughout Scottish non-league football the club has to be applauded for Embracing the Future and striving to better themselves in this new dawning.

The club would like to thank everybody who volunteered their service to the upgrade of our ground and all the supporters who financially backed all our ventures. Without the club, its sponsors and the magnificent Talbot Army all this work to help Talbot progress would be little more than a pipe dream.