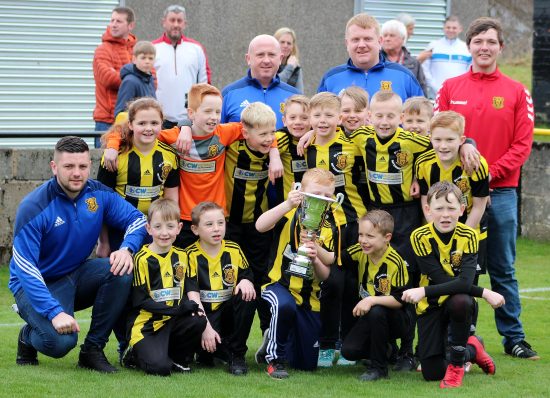 Talbot travelled to Loch park to take on local rivals Glenafton. With only 12 available players today was always going to be a difficult game. The first half was a contrast of styles as Talbot tried to play their passing game and Glens playing long balls, with both teams creating chances but failing to take them. Half time 0-0

The second half started the same way with chances at both ends. Midway through the second half a fumble by the glens goalkeeper fell to McLean and he gave Talbot the lead. Talbot started to dominate the game but couldn’t get the second goal. With 5mins left Glenafton were awarded a very dubious penalty. Rooney got a hand to the penalty and was very unlucky not to keep it out.

10 minutes to go 3-1 down and the boys pulled the socks up and dug deep and josh jones burst through and finished well under the goalie 3-2, jay Waddell then pulls the boys back level to make it 3-3, Talbot pushed for the win but unfortunately ran out of Time

Man, of the match: Callum McCoskrie

Only one game for the 06’s this weekend away to Dreghorn. Good start to the game from the Talbot boys. A few changes due to injuries changed the game a bit and Dreghorn started to control the play. Most of the first half continued the same way but we got a few glimpses of how well the Talbot boys can play. Into the second half and again the boys started well and had more of a say in the game. A good goal from Blair Rennie gave the boys a bit of a boost but we started to tire again late on. A few positives to take from the game but a bit of work to do for the 06’s.

Both Talbot teams were away at Ayr Boswell on Saturday morning.

The Blacks side started brightly and were playing excellent football, creating great opportunities. The Boswell goalkeeper deserves plaudits however as he pulled off a string of fine saves. The boys kept plugging away though and despite having no subs on a hot day, the effort and attitude they showed was first class.

The Golds side were involved in a very even first half and they too were playing good football. They lost a couple of soft goals before the break but they didn’t let that affect them as they dominated the second half. Again, their effort and attitudes were first class. Every player should be really proud of their performance.

Golds…. Home and back on the grass at the Merlin to Caledonian the golds struggled to get into the game with playing mostly on the defence. Caledonian took the lead and continued to control the play with more goals coming before half time. The golds had a few chances but couldn’t finish on them.

Golds came out on the second half and looked strong with some great play with Caledonian at times struggling to keep up, however some great saves from the Caledonian keeper kept the goals from coming. Caledonian then went on the score sheet again and the golds were back to a period of defending, goal came late in the second half from Douglas Schendel with a great strike. A very defensive game for the Golds this week…. Some work to be done for next week’s away game to Dean Thistle.

Following a free week, we were back to business with a tough home tie, hosting Caledonian at the Merlin.

Talbot started the strongest keeping a hold of the ball, stringing passes together and creating chances. Against the run of play Caledonian took the lead, but this didn’t let the boy’s heads drop, a few goals before half time reflected Talbot’s dominance in the first half. Second half kicked off and Talbot continued where they left off forcing Caley into mistake after mistake, the game as a contest was written off after a couple of Talbot goals put the game to bed. At this point a few showboat moves were on display, still continuing the high press, keeping possession with some intricate passing and chances still being created. A late Caley goal wasn’t enough to take the wind out of our sails and the boys enjoyed a comfortable victory against an opponent that always give a hard fixture. Man, of the match Phoenix McCutcheon.

The hard work will be continued at training ahead of our away fixture to Dean Thistle next Saturday.

Golds: -Tricky first half for boys finding it hard to get out our own half mainly due to the oppositions very high press, the times we did we did we created good chances but they just didn’t fall for us, a Complete turn around in fortunes in the second half with much Better passing, better tackling, a couple of goals and a clean sheet, Man of the match Caleb Muir