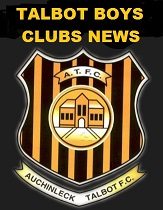 Hard fought win against a good Valspar side in high temperatures

Talbot went up 2-0 as jay Waddell scores a header from a corner and a cut back to Michael McCulloch who slotted home the second, Valspar slotted home a penalty to make it 2-1 at half time

Second half Valspar threw bodies forward and got an equaliser before a red card from both sides made it 10 v 10, a change of formation and hard work were needed and the boys gave it everything they had and Josh Jones put them 3-2 up, Valspar had a shout for a goal but the ref waved them away before waving another red card at them as well

Man of the match

TALBOT 3-2 GLENBURN || a close game between two good sides. Talbot took the lead through a header from Kiain Robb but Glenburn’s first equaliser came not so long after. Talbot regained the lead towards the end of the second half after Lucca Antonucci lobbed the keeper from eighteen yards. Early in the second half, Glenburn scored their second from the edge of the box with our keeper unlucky not to make the save. Towards the last five minutes, the boys showed great passion and determination and really pushed for a third and were rewarded as Ryan McCarron got a touch on Lewis McFadden’s cross. A well-earned victory for the team

Man of the match

Talbot got there first 11 a side league under way with a 12-3 win against Cambusdoon.the boys got of 2 a slow start with the game tied at 2-2 at half time, in the second half they started moving the ball better and got there rewards and scored some good  goals

The goals came from

Man of the match Tyler McPike

After a very late change of venue to Catrine, Talbot welcomed Valspar for what are traditionally very tight hard fought matches and this one was no different.

The game started with Talbot on the front foot and creating chances, and working the Valspar goalkeeper. Valspar played a quick counter attacking game, which they did very well. A very even contest with Talbot having more possession and passing the ball well, and Valspar having the better chances on the counter attack. Two well taken goals from Kaitlin Houston wasn’t enough as individual mistakes from Talbot would ultimately cost them. These are things that we will continue to work on at training. A mention to Jayden McCabe who stepped up his recovery from injury with a good 30mins of action, and also to Josh Kerr in goals who made some terrific saves again today.

A big thank you to Catrine Amateurs for helping us out with a pitch at very short notice.

Good luck to Valspar for the rest of the season.

First half we had all the play it was pretty much one way traffic and they really struggled to get to grips with the play from muzz, Ryan and Luke down the left but to be fair they would have been a handful for anyone tonight the passing and work rate from all the boys was great and they deserved to see the goals coming from this

Even at 10am it was a sweltering hot day for our return to super 5s at Caley Prestwick.  Kids played some great football with lots of great individual play and team work, strong tackles, saves and some cracking goals scored.  Good day on the pitch all round.

Our Black and Gold teams returned back to fun 4’s for our last season before we head to 5’s and what a morning it was in the glorious sunshine down at Dean Park.  Both teams played outstandingly well in all games.