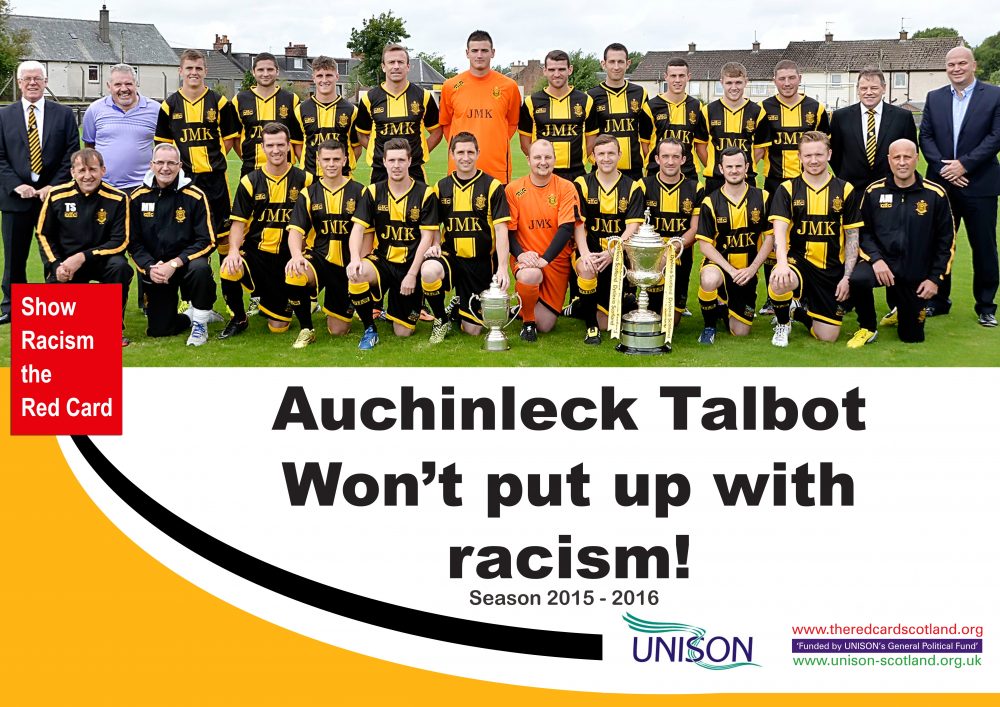 Welcome to Show Racism the Red Card’s annual Fortnight of Action. The 2015 Fortnight of Action will unite Scottish football in making a stand against racism. We believe that it is vital to highlight the anti-racism message at this time, in conjunction with Football Against Racism in Europe (FARE).
Scottish Junior FA clubs will make a stand against racism over one weekend whether at home or away. We have coordinated the participation of the clubs’ actions to make it the biggest and most high profile fortnight so far.
At SJFA matches, clubs will be united in calling for an end to racism in football and in society. Players in over 40 European countries are involved in similar events as part of the Football Against Racism in Europe (FARE) network against racism and discrimination.
Show Racism the Red Card has received excellent support from football clubs, football authorities and football fans over the length and breadth of Scotland – we would like to take this opportunity to thank you all. We have heard of many instances where supporters have been proactive in promoting the anti-racism message, making it clear that racism and discrimination are not welcome at their club. We urge fans to continue to support the anti-racism message; it is the responsibility of us all to ensure that it is carried beyond the Fortnight of Action and beyond the terraces.
“The SJFA acknowledge that racism is a form of oppression. We aim to support and embrace diversity and difference through zero tolerance to racism and discrimination of any kind, education of our young and our actions both on and off the park.” Tom Johnstone Scottish Junior FA.
The SRtRC campaign will continue to speak to all football clubs, the football authorities and the police to eradicate all forms of racist behaviour.
The SJFA and its clubs deplore all forms of racism and any racist behaviour will not be tolerated within SJFA.
This year the campaign has continued to develop partnerships with local authorities to deliver educational workshops combined with football coaching sessions in a number of regions. The workshops are delivered by a dedicated team of education workers and ex-professional footballers. They are a very positive method of educating our young people about the negative impact racism has on Scottish society.
Here’s a brief outline of what’s taking place during the Fortnight of Action this year:
 Anti-racism football festivals and projects across Scotland.
 Show Racism the Red Card actions at SPFL, Scottish Women’s Premier
League, Scottish Women’s Football League, Scottish Junior Football
matches.
 ‘Unite Against Racism’ actions at UEFA Champions League fixtures.
 Educational workshops in schools and community groups across Scotland.
Football is a sport that is followed by people across the world, and football matches should be an enjoyable experience for all, whatever their background. We all have a part to play in stamping out racism in football and society.
If you see or hear racism or sectarianism at any level of football, please report it to the stewards or police.
Our website also includes updates on Fortnight of Action events and more information on the Show Racism the Red Card campaign in Scotland.
www.theredcardscotland.org
Show your support for tackling racism:
Follow us on twitter: @SRtRCScotland
Like us on Facebook: facebook.com/theRedCardScotland