Talbot travelled to Dalmellington as guests of Ayrshire District League side Craigmark Burntonians and put in a solid display that was rewarded with nine goals. The game itself was in doubt on Friday night as the host club were struggling for players due to holidays and transfer and the side that took to the pitch was a youthful 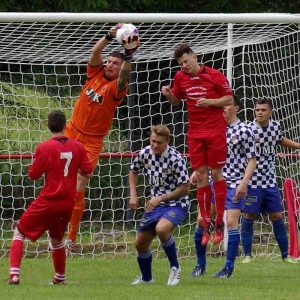 turnout.
Talbot had three trialists in the squad including a well kent face from not that long ago as with the three new signings, Gillies and Wilson started the match with Love coming on later in the second half. The game itself started briskly with the home side showing some good defensive work as Talbot forced some early attacking. However it only took 10 minutes for Talbot to open the scoring when Davie Gillies broke into the box and his cut back was swept into the net by MARK SHANKLAND. It was 2-0 two minutes later when James Latta dribbled into the danger area and his pass into the six yard line was pounced on by STEVEN WHITE who shot took a deflection sending the keeper the wrong way.
Craigmark seemed to rally to the misfortune of being two goals down and held Talbot at bay until the 23rd minute when MARK SHANKLAND went on a solo run which was ended with a superb curling shot which left the keeper stranded. Goal number four came a minute later when Lee Cochrane robbed a defender at the edge of the home box where the ball fell to TRIALIST 1 and he crashed the ball into the net. New boy STEVIE WILSON got in on the act on the 28th minute when a superb ball by Gillies into his feet saw the big midfielder give the keeper no chance. 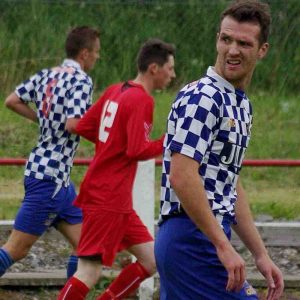 The game seemed to go into training mode as Talbot took the foot off the gas and both teams headed for the pavilion with Talbot 5-0 up. The second half saw the introduction of Milliken, Trialist 3, Boyd and G.Wilson at the expense og Gillies, Shankland, Trialist 2 and White. The switch seemed to hamper the Talbot as they had plenty of the ball but the red wall of defenders was holding out with some back to the wall defending and in the opening 15 minutes of the second half the only thing of note was G. Wilson header that came off the post.
On the 69th minute the scoring spree was resumed when Keir Milliken jinked his way past a number of defenders before setting up LEE COCHRANE who dispatched the ball into the back of the net. A minute later in was 7-0 When Trialist 3 cut into the goal area to set up GRAHAM WILSON who made no mistake from close in. Talbot introduced ROBERT LOVE for Steven Wilson and on the 87th minute the former Albion Rovers winger thundered a Trialist 3 cut back into the roof of the net. The scoring was ended when Trialist 3 turned provider once again when his pass into the box was swept past the keeper to make it 9-0. In the last minute Cochrane showed some great skill when he killed a cross with his chest and hammered the ball off the bar. 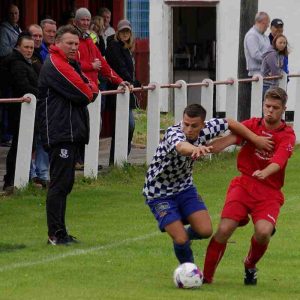