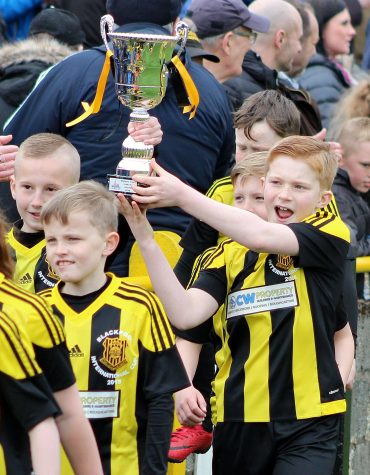 Only one game for the 06’s at Ayr academy against Valspar. A really good start to the game again from the Talbot boys but they found themselves going behind by two goals which really didn’t reflect the game. A good positive attack saw us pull one back through Harry Biggans just before halftime. Into the second half and the Talbot boys fought hard and played well in spells but again a couple of mistakes cost us dearly and Valspar took advantage. Unlucky day again for the 06’s and again the score didn’t reflect the game. Bit of work to do but lots of positives to take away from this game.

Man, of the match: Gavin Withers

Second half Talbot found their feet and put on a performance to enjoy with neat passes and the football was flowing, Michael Kane got his double and his 20th and 21st goal of the season to make it 3-2 before Jy Guthrie also hit his second of the match to make it 4-2 with 5 minutes remaining Cunninghame snagged a goal to make it 4-3 but Talbot saw the game out and took the points

Man, of the match: Michael Kane

08s welcomed Shortlees BC to the Merlin park, for the first ever meeting of the teams

Blacks were looking to extend their undefeated run and right from the very start Talbot seemed up for the game. Wave after wave of attack eventually saw Talbot take full control of the game. The boys put together a few good moves working the ball through the middle then getting it out wide, although overall passing, movement and communication wasn’t at as a high a level as the week before, which will be worked on in training before next week’s game.

Golds recorded a very energetic performance for the duration of the match at the Merlin, utilising the space on the pitch to create good chances. A good attacking performance from Shortlees BC required the Talbot team to work hard defensively before starting any attack. Good pressure around the pitch resulted in Talbot regaining possession in good areas which created a lot of chances for us.

I’d like to add a special note of how pleased I was to see the team stick to their pre-match game plan, and also how they managed to keep focus on their positional discipline right through until the final whistle.

Another special thanks to outfielders Tommy and Ally who covered our Goalkeeping position in absence of our injured no.1 of whom we wish a speedy recovery.

We would like to wish Shortlees all the best for the Rest of their season.