On paper this game looked a banker for Talbot & it followed the script as the Bot swept Lugar aside 5-0 in a one-sided encounter.
Talbot dominated from the outset & could have taken the lead in the 7th minute when G Wilson ghosted past Drummond & whipped over a cross that Shankland headed straight at the keeper from 8 yards.
Two minutes later the roles were reversed, this time Shankland’s clever reverse pass sending G Wilson through on the left side of the area but he blazed his shot over the crossbar.
Talbot’s next attack saw Montgomery concede a free kick when he clipped the heels of Glasgow. Shankland swept the ball in low across the goal mouth but no one could get the final touch & it flew past the back post.
Graham Wilson then had a chance to open the scoring when his brother’s cross from the right touchline found him in space but he steered his header straight at Davis.
The pressure told & Talbot took the lead in the 17th minute. Shankland nodded a ball on through to GRAHAM WILSON who burst into the box & rounded the keeper before stroking the ball into the empty net.
Five minutes later Talbot doubled their lead. Latta knocked a good ball up the right to find Shankland running in behind. He lifted a cross to the far post where GLASGOW nodded it back across goal & beyond the keeper.
The game was over as a contest in the 27th minute when Talbot grabbed their third. Lugar conceded a free kick 25 yards out when Shankland was barged in the back. POPE took it & fired wide of the wall & past Davis, who seemed to think it was going wide until it was too late.
As often happens when a team races into an early lead Talbot unconsciously switched down a gear, continuing to dominate possession but rarely looking like adding to their lead before the interval.
They did have a chance in the 41st minute when Shankland’s pass sent Glasgow free on the left. He hammered it for the near post where Davis made the stop & the keeper recovered to smother the loose ball.
The 2nd half followed on where the 1st had left off with Talbot camped in the Lugar half looking for a way through a packed defence.
Shankland had a good chance to add to Talbot’s tally in the 53rd minute. Glasgow squared the ball in from the left & Shankland ran onto it 12 yards out & tried to pass it home but side-footed just wide of the right post.
The fourth goal arrived after 57 minutes when Pope cut the ball back to THOMSON who swept it home.
Tucker now made a triple substitution with Shankland & the Wilson brothers departing to be replaced by Kemp, Pooler & McIlroy.
The game’s one & only yellow card appeared in the 63rd minute for Lugar’s Drummond who was penalised for a blatant trip on Glasgow.
Talbot’s next attack saw Thomson win the ball just outside the box & release Kemp down the right. He raced into the area but chose the wrong option & fired wide from a tight angle.
Lugar now made a change with Orr coming on for Curtis & Talbot made a precautionary move with Latta leaving the field after taking a knock & Talbot seeing out the game with 10 men.
The extra man made no odds to the pattern of the match & Talbot continued to dominate.
Lugar were content to sit in & keep the score down and it worked for the most part but in the final minute Talbot added a fifth to complete the rout. Kemp cut in from the right & angled a ball into the near post which Pooler helped on to GLASGOW who rammed it home from close range.
A comfortable night for the Bot on the pitch, which is more than can be said for the spectators who spent an uncomfortable evening being plagued by Rosebank’s infamous horde of midges. Next up for Talbot is a home tie against Kello Rovers this Saturday. 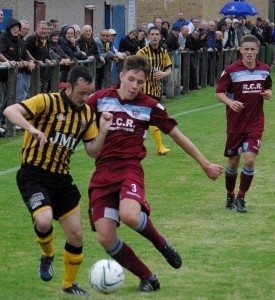 but made hard work of it.
Talbot started brightly and mght have taken the lead after 2 minutes. Hyslop slid a pass out to Shankland on the left and he fired a good early cross into the centre toward G Wilson which Gall did well to cut out.
Leishman had little to do in the 1st half as a whole but was called into action in the 5th minute when Lyle’s weak header landed at the feet of Mitchell who shot straight at the Bot keeper.
Lugar then retreated into their shell and seemed content to sit deep midway in their own half and hope on the linesman’s flag coming to their rescue.
Gall was tested in the 12th minute when Boyd raced free on the overlap and slung the ball beyond the far post. Young kept it in play and directed it back across goal where Shankland lobbed an effort on target that Gall snatched out the air.
Two minutes later Talbot had another effort at goal. McGoldrick found Stevie Wilson racing free on the right and he crossed it to the far side of the box where his brother Graham volleyed wide of target.
Talbot took the lead in the 16th minute. Young switched play out right to find Stevie Wilson running into space and he whipped the ball across the 6-yard area where SHANKLAND nodded a free header home from close range.
Boyd had a real chance to put Talbot on easy street in the 22nd minute. He raced onto Shankland’s clever flick and burst into the box where he seemed set to fire for goal but he took one touch too many, allowing Muir the chance to slide in and clear it behind for the corner. Pope knocked the corner to the far side of the 6-yard box where Campbell towered a header back across goal. It had Gall beaten all ends up but Hilton was perfectly 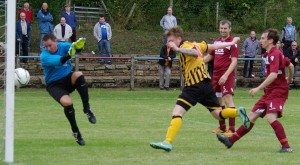 positioned to clear it off the goal line.
Talbot continued to dominate and came close again in the 25th minute. Young lifted an early ball down the left wing to find Graham Wilson and he swept an early cross into the near post which Gall had to block with his legs with Shankland waiting in the centre.
As the half wore on, the quality deteriorated, with Talbot well on top without looking like adding to their lead and Lugar producing plenty of effort but precious little otherwise.
After this hiatus of quarter of an hour or so Talbot again began to threaten the Lugar goal; firstly Young volleyed over the bar after being set up by Shankland and then McGoldrick set things rolling with a well-weighted pass out to Shankland whose cross found Graham Wilson unmarked in the centre, but it was a touch too high and skidded off the top of his head and behind for a goal kick.
Shankland had a decent chance to grab his and Talbot’s second in the 41st minute. Graham Wilson fired in a superb cross from the left that Shankland met at the far post but his powerful header was parried clear by Gall.
Hyslop had the final chance of the 1st 45 when he met Pope’s corner from the right in the final minute but he glanced his header wide of the right hand post.
Talbot started the 2nd half in fine fashion and looked set to extend their lead in the opening exchanges.
Graham Wilson ought to have put Talbot two ahead in the 50th minute following good work by Boyd & Hyslop on the right but when the ball was cut back across goal he took a fresh air swipe at it and the chance was gone.
A minute later Talbot won a free kick right on the edge of the area when Shankland was tugged back as he ran onto Young’s lay off. Shankland hit it and tried to drill it inside Gall’s left post but the keeper got across to make the stop. 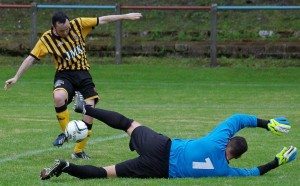 Shankland very nearly added to Talbot’s lead in the 53rd minute when he found space out on the right and dinked a delicate lob over Gall that just cleared the crossbar.
Lugar now made a change with McCowan replacing Hilton.
Talbot missed a double sitter in the 56th minute. The Bot won a corner out on the right and Pope hit it to the far post where Campbell headed it powerfully back across goal. Hyslop looked sure to knock it in from 6 yards but failed to connect & the ball then bounced up off the bobbly surface and Stevie Wilson went to head it home, only to direct his header over the bar from close range.
Both sides now made changes with Lugar bringing Antoine on for McMaster and Talbot replacing Hyslop with Love, and then the home side made a further change with Faulds on for Mitchell.
Most of Talbot’s chances were falling to Shankland and he came close again to grabbing his 2nd in the 69th minute. McGoldrick spread it out left to find Graham Wilson and he nodded it across to Shankland who lifted a shot just over the bar.
The longer the game went, the poorer the game became and Talbot looked comfortable at one up without looking like adding to it.
Tucker made a switch in the 73rd minute when Gillies came on for Graham Wilson and a further change followed with 10 minutes remaining with Milliken on for Shankland.
After a lengthy spell as a virtual spectator, Leishman was called upon in the 83rd minute when Stevie Wilson dawdled on the ball & lost possession, deep in his own half. McCowan gathered on the right and cut in field before drilling a shot from 20 yards straight at Leishman.
The game seemed destined to meander to a close but Talbot perked up in the final stages and added a few goals to add a more realistic look to the final score line.
With 88 mins on the clock MILLIKEN got in behind the defence on the left and buried a low shot back across Gall and into the far corner to make it 2-0 to Talbot.
Lugar had an opportunity in the last minute of regulation time to pull a goal back when Faulds won a corner out on the right. McCowan whipped it into the near post where Faulds directed his header over the bar.
Deep into injury time Talbot won a free kick right on the edge of the Lugar box when Love was prevented from breaking into the penalty area. Pope took the set piece and drilled a low shot wide of the wall which Gall dived to save low to his right, but LOVE had followed up and he swept the rebound home to make the final score 3-0 to the Talbot.
This win sets Talbot up with a home tie next Wednesday in the quarter-finals when Maybole visit Beechwood.