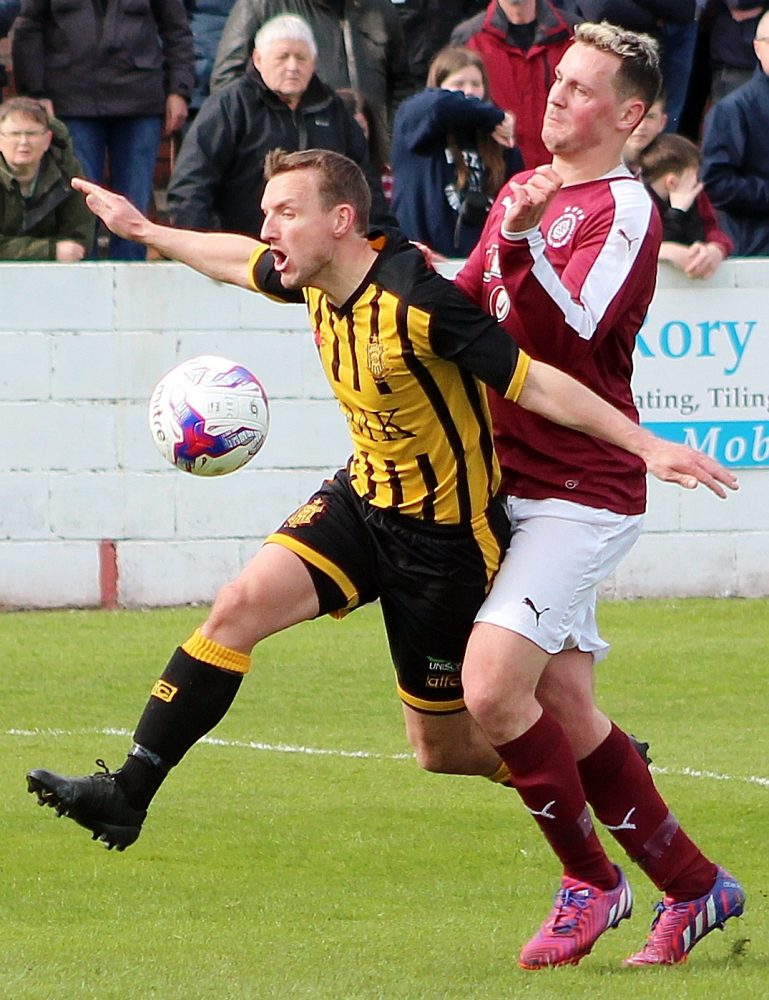 Talbot will be pleased enough with the result, if not the performance, as a dour 1st leg ended in stalemate at Linlithgow.
Both sides looked nervy from the off, but the home side settled quicker & did most of the pressing early on without offering any real threat.
The 1st chance of the match came in the 13th minute. G Wilson’s pass was intercepted inside the Bot half & Linlithgow chipped the ball down the right channel where Coyne raced onto it & fired for goal from a tight angle. Leishman was at his near post to turn it behind. When the corner came over Leiper had a free header but didn’t make a clean contact & he glanced it off a Bot defender & behind for a corner.
Talbot put together a good move in the 25th minute. Pope knocked it into the feet of G Wilson who shoved it through for Young on the left of the area. He lifted it past Hill into the back of the net but he’d strayed offside & the goal didn’t stand.
Tucker was forced into a change in the 34th minute when Shankland limped off to be replaced by Latta.
A minute later Young tried his luck from distance; hitting a decent effort on the half volley from 25 yards that flew over the bar.
Talbot suffered a further injury setback a minute before the interval with White making way for McCracken.
In the closing seconds of the half Linlithgow almost took the lead. Donaldson ballooned the ball into the area from the left touchline where it broke away from Lyle as he tried to control it. Muhsin tried to thread a pass through from the edge of the area that was blocked back to him & this time he drove a low shot in. Linlithgow got the break of the ball as the shot deflected into the path of Kelbie 6 yards out but Leishman produced a good stop low to his right to block his shot, and that was that for the 1st period. The 2nd half began much as the 1st had left off, with plenty of commitment on show, but with both sides guilty of misplaced passes & hasty decision making.
Talbot’s first chance of the 2nd period came in the 55th minute. McCracken squared it to Milliken in space just outside the area but he scooped his shot over the bar.
Two minutes later Talbot had another half chance. Milliken’s persistence paid off when he blocked McNab’s attempted clearance. The ball spun his way inside the box & he slid a pass through to Young. He could’ve gone for goal but felt the angle was too tight & instead tried to pull it back across goal for G Wilson but it was intercepted in the 6-yard box & cleared.
McCracken had his name taken in the 58th minute for a late challenge.
As with the 1st half most of the play was confined to the middle third with little to trouble either defence.
The next chance came Talbot’s way in the 72nd minute. G Wilson headed the ball into the area where Latta was running into space. It looked like he was going to get his shot away as the keeper advanced but the ball ran away from him & he came off 2nd worst when he slid into a 50/50 challenge with Hill.
Young whipped a great cross over from the left with quarter of an hour remaining but it went to waste as there was no one in the centre to convert.
Talbot were finishing the game strongly & had a half chance to snatch the lead in the 80th minute. Milliken did well out on the left & rolled the ball straight into the path of Steven Wilson who blazed it over the bar from 20 yards out.
Talbot had a strong shout for a penalty in the 83rd minute. G Wilson picked up in midfield & fed it out to Milliken on the left wing. He lifted a great early cross over to the far side of the area where Latta was racing clear. Donaldson ran across him & looked to clip his heels but the referee dismissed Latta’s appeal & waved play on.
Linlithgow made their only change with five minutes to go when Kelly replaced Gray.
In the final minute of the match Talbot had one last effort at goal. A free kick on halfway was lifted down the left side of Rose’s penalty area & Harvey sent a diving header wide of target from a tight angle.
This was a game of very few chances & neither side can have any complaints about the outcome. Both sides now face a winner takes all 2nd leg clash next Saturday at Beechwood where Talbot will be hoping home advantage proves crucial.