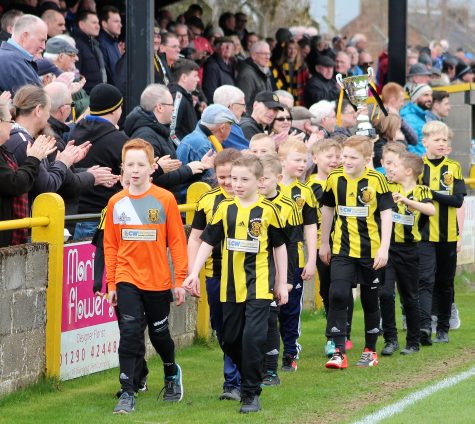 Second half and with the boys finding their feet they played more assured football and started to turn it on,

Left back Logan “joe” Murray won the ball just inside the Caley half beat three then on his favoured right foot unleashed a shot from distance that blazed into the net 1-0,capitan Gavin withers then went up for a corner and won a header only for it to hit a Talbot man but he showed great awareness to still stab the ball home , jay Waddell almost made it 3 but for an outstanding last gasp challenge from the Caley defender, Talbot were in the groove and Kane and Guthrie were bringing out their bag of tricks and at this point the strikers took over after seeing the defenders score and first josh jones finishes well before Kyle Shankland finished the match off after good work from Michael Kane who cut it back

Man, of the match: Kyle Shankland

Hurlford went into an early lead before josh jones hit his 30th of the season to level it up, Hurlford again went in front but left back Logan Murray scored his second goal this week with a long range free kick to make things even at the break

Second half Talbot started bright and but bad marking from a corner let them take a 3-2 lead, Hurlford started to look hungrier near the end a quick free kick caught the boys off guard and Hurlford scores to put the tie out of reach

Man, of the match: Kyle Shankland, for his drive and determination

Both teams traveled to Kilmarnock to face Dean Thistle.

Golds:-  Taking on the lessons learned from a poor performance last weekend and working on these at training. The game started off with great pace from all the players and a goal coming in for the golds shortly followed by another and the game was on, however an own goal brought Thistle back into the game. Going into the second half it was soon 2 each, some inspirational words given to the players and the goals started again with outstanding performance from all the team and a hat trick coming form Kaitlin, 2 from Tommy, goals from Douglas, Ally & Ayden to finish the match and all this without the No1 goalkeeper. A very special thanks from the coaches to Tommy & Ally for stepping into the nets, well done and we hope Connor is back for the home game against Shortlees this weekend.

Blacks:-  With only had 7 players available, so it looked like a difficult morning in the heat for the blacks. But this wasn’t the case as the blacks put in THE best performance seen by the team in a long time. With no subs, the players were instructed to move the ball quickly, and they did with every player involved in numerous free flowing passing moves and long spells in possession and scoring some beautiful goals. The best if the bunch came from a move that started with gk Kerr and every player involved in a quick tempo passing move and tapped home by Meikle.

Special mention to Kerr, Hayden, Watson, Reid, McCabe, Bishop & Meikle. All 7 player deserve all the credit for this performance.

Keep up the good work ⚽️⚽️