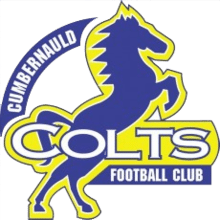 Talbot will travel to Broadwood Stadium to take on Lowland League newcomers Cumbernauld Colts in the second round of the William Hill Scottish Cup. The Colts are managed by ex-Dunipace managerial pairing of Craig McKinlay and James Orr who left the Falkirk club at the end of last season to take over at the Colts. Unfortunately the Colts website was hacked so we are not sure about their playing squad, but are lead to believe that the vast majority of the team come from Junior backgrounds.

The Colts are currently in fifth place in the Lowland League and progressed to the second round of the cup by beating Glasgow University 3-0 at Broadwood. This match was moved to a Sunday due to the Colts ground sharing with Clyde.