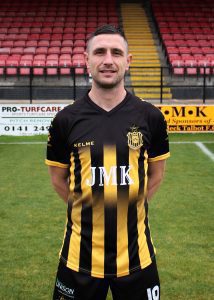 BIO: A local Catrine lad Willie was a protégé of the Talbot youth system before signing senior with Ayr United in 2002. He made his senior debut as a substitute against Falkirk on the 3rd of August 2002. The following season he was a member of the Ayr side that lost narrowly to Rangers at Somerset in the Scottish Cup. In the 2004/05 season Willie bagged his first competitive goal in a Scottish tie against Edinburgh City. He moved to Raith Rovers the following season, and Stranraer the season after. In 2007 he joined Stenhousemuir where he played regularly until the end of the 2012 season, before signing with Talbot.