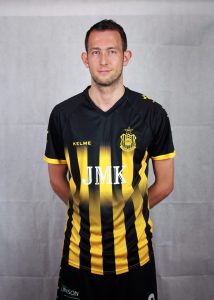 BIO: Signed from Annbank United in 2012 the talented big midfielder went through some tough times recently with a recurring knee problem. Broke down during a league match against Pollok a few seasons ago, but thankfully a successful operation has put paid to Dwayne’s woe’s and he has been instrumental in Talbot’s success over the past season. He scored one of the best goals ever seen in a Scottish Cup final.