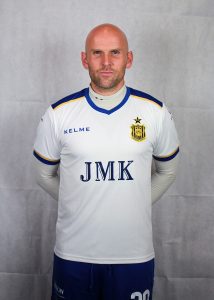 BIO: The veteran keeper started his Junior career at Beith but joined Neilston Juniors in 1999 spending 10 years with the “Farmer Boys”. He made the bold move to Irvine Meadow in 2009 where he won an Ardagh Cup winners medal against Talbot. He later joined Dalry Thistle in 2013 before coming to Talbot in 2016.