The Committee of Auchinleck Talbot Football Club believes that conduct according to the spirit of Fair Play is essential for the successful development, promotion and involvement in sport. The objective of Fair Play is to foster a sporting spirit, as well as the sporting behaviour of coaches, players, team officials and spectators, thereby increasing the enjoyment of all those involved in the game.

In order that the Club may address the behaviour of supporters in a meaningful way, consideration must be given to the actions and activities of five integral parts of those associated with the club – its coaches, players, officials and supporters.

Code of Conduct for Coaches:

Coaches are key to the establishment of ethics in football. Their concept of ethics and their attitude directly affects the behaviour of players under their supervision. Coaches are, therefore expected to pay particular care to the moral aspect of their conduct.

Coaches have to be aware that almost all of their everyday decisions and choices of actions, as well as strategic targets, have ethical implications.

It is natural that winning constitutes a basic concern for coaches. This code is not intended to conflict with that. However, the code calls for coaches to disassociate themselves from a ‘win at all costs’ attitude.

Increased responsibility is requested from coaches involved in coaching young people. The health, safety, welfare and moral education of young people are a first priority, before the achievement or the reputation of the club, school, coach or parent.

By registering as a coach with AUCHINLECK TALBOT FC I agree to abide by these principles. I support the Club in its undertakings and encourage the Club to take any necessary disciplinary actions, where warranted, of any coaches, players and or Club official for repeated or serious breaches of these Codes of Conduct. 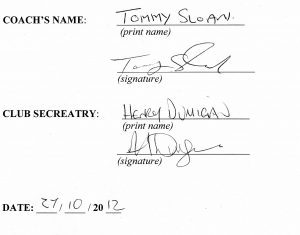 Code of Conduct for Players:

Players are the most important people in sport. Playing for the team, and for the team to win, is the most fundamental part of the game. But not winning at any cost – fair play and respect for all others in the game is fundamentally important.

This code focuses on players involved in top class football. Nevertheless, the key concepts in the Code are valid for players at all levels.

Obligations towards the game

Obligations towards one’s own team

Respect for the Laws of the Game and competition rules

Obligations towards the Supporters

By registering with AUCHINLECK TALBOT FC I agree to abide by these principles. I support the Club in its undertakings and encourage the Club to take any necessary disciplinary actions where warranted of any players, coach and or club official for repeated or serious breaches of these Codes of Conduct. 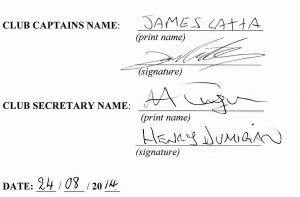 Code of Conduct for Team Officials:

This Code applies to all team/club officials, including committee [although some items may not apply to all officials].

Obligations towards the Game

Obligations towards the Team

Obligations towards the Supporters

Respect towards the Match Officials

A team official should:

By registering as a volunteer with the AUCHINLECK TALBOT FC I agree to abide by these principles. I support the Club in its undertakings and encourage the Club to take any necessary disciplinary actions where warranted of any coaches, players and or club official for repeated or serious breaches of these Codes of Conduct. 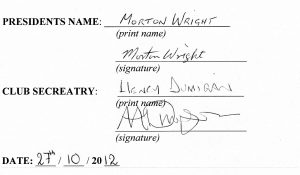 Code of Conduct for Supporters:

Once the club has addressed the conduct of its coaches, players, officials and parents and guardians of its young players, it will be in a position to set an appropriate example to its supporters in terms of behaviour.

The crowd is considered to be an organic component of a football game. The support of the fans may contribute to the success of the team. The crowd is not expected to watch the game in silence.

Encouragement of the teams by shouting, non-abusive singing etc. may have a positive influence on the atmosphere in accordance with the spirit of Fair Play.

The spectators are, however, expected to respect the opponents and the referee. They should appreciate the performance of the opposition even if they emerge as winners. They should in no way intimidate or frighten opponents, the referee or opposing supporters.

All parties are required to comply with the Clubs Racial Abuse Policy.

As a family and community club, open to everyone, the Committee are keen to ensure that all supporters, players and officials do not engage in any form of unacceptable conduct. That is, conduct which is violent or disorderly.

Violent conduct includes any actual, attempted or threatened physical violence against any person, or intentional damage to property.

Conduct which stirs up or sustains, or is likely or is designed to stir up or sustain hatred or ill will against or towards individuals or groups of people because of:

ANY PERSON ENGAGING IN UNACCEPTABLE CONDUCT MAY BE SUBJECT TO ANY, OR A COMBINATION OF THE FOLLOWING: